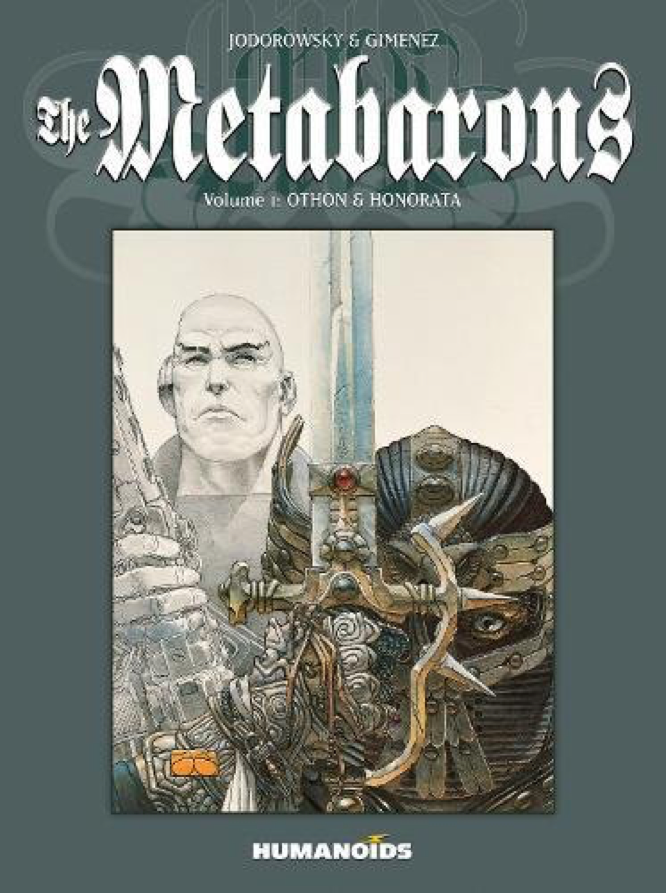 This American publication collects the first two bandes dessinées in a series of eight. A blank page joins the two originally separate volumes. Under this cover is the immediate pre-history and first generation of the Metabarons–the line of warriors whose descendant features in the Incal space operas of Jodorowsky and Moebius. The artist for The Metabarons is Juan Gimenez, whose work is quite capable, but lacks the luminosity of Moebius’ illustrations.

The story is framed as a recounting from one robot to another, as they serve in the “Metabunker” home of (presumably) the Metabaron of the later Incal period. These two are set as camp characters, irritating each other and exhibiting displays of exasperation, and they add no real value to the narrative proper.

The main plot and setting elements are, it saddens me to say, mighty unoriginal. While there have been cosmetic changes and some shuffling of tropes, almost every element of note here is derivative from Herbert’s Dune. For “epiphyte” read spice. For “Shabda-Oud” read Bene Gesserit. There are space-magical features of the type found in Dune, but actual mystical symbolism of the sort that Jodorowsky emphasized in The Incal is much less apparent here.

The original Metabaron Othon has a little family of indigenous slaves: Ikku-Tta and his two daughters. These have their noses painted black. In some panels, this makes them look like puppies, and in others skulls. I wonder if the ambivalence was deliberate.

It’s possible that the translators are at fault, but I suspect that Jodorowsky himself is to blame for the excessive indulgence in exclamation points! I don’t think there’s a plain period at the end of a sentence in the entire book! Although there are occasional ellipses …

Maybe this series picks up in later volumes, but I wasn’t thrilled with this one.