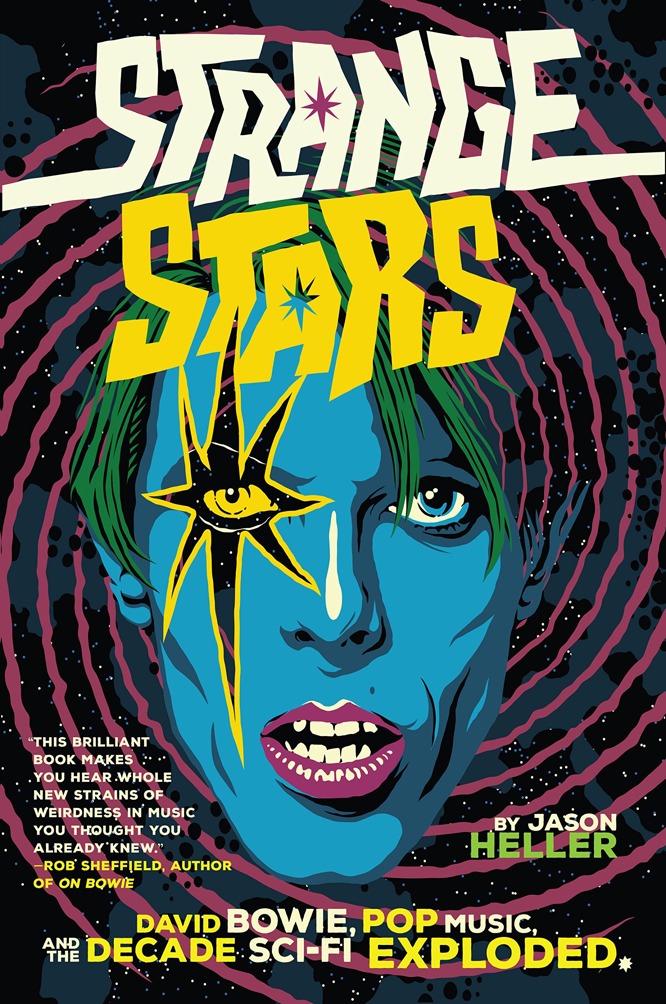 Strange Stars is a study of genre in 1970s mass culture, specifically science fiction in the dialogues among various media: music and printed literature, film, and television. Mostly, the influence runs from the literature to music, often through the other media, but there are significant reversals and loops.

The book is organized chronologically, with a chapter for each year from 1970 through 1979, and bracketing chapters for the late 60s and the 80s and beyond. David Bowie’s journey from the folksy rock of “Space Oddity” to the new-wave-infused “Ashes to Ashes” supplies something like a narrative framework, but much of the book consists of a sprawling inventory of any music or musicians engaged with science fiction. Despite “Pop Music” in the subtitle, the treatment is in no way confined to a Top-40 milieu. Prog, metal, glam, krautrock, funk, and disco were all key subgenres in the proliferation of sci-fi notions through music.

I read much of this book with the other hand driving the YouTube search on my computer, since it cites a fair amount of music previously obscure to me. I think that’s an optimal way to read this sort of music criticism, which demands a multi-media sort of engagement for full appreciation.

Strange Stars includes frequent discussions of the sci-fi sleeve art for music records, a topic that could justify an entire book of its own, and none of the actual images are reproduced. Heller aptly observes that the most iconic sci-fi album image of the era was the guitar ships of Boston (1976), a record which had nothing at all science-fictional about its lyrics or musical style. He suggests that the fact represented a watershed moment, when sci-fi packaging became a modish selling point as opposed to a hazardous design option (137). Certainly, with the release of Star Wars shortly thereafter, the trend was consolidated.

Heller has done an impressive job of sleuthing out webs of personal association as well as artistic influence. Next to Bowie, perhaps the second most conspicuous figure in the book is science fiction author and sometime musician Michael Moorcock, whose enthusiasms and lyrics, starting in the Ladbroke Grove bohemian scene of the late 60s, were perpetuated through his collaboration with Hawkwind, Blue Öyster Cult, and others.

I’m not sure that the rigorously chronological scheme that Heller used here makes for the most compelling reading experience. It imposes a need to leap around quite widely-separated developments in different musical genres and sometimes leads to a feeling of choppiness and atomization. In his acknowledgments, Heller credits his editor Ryan Harrington for transforming this work to narrative history rather than an “encyclopedia,” and traces of that original sort of reference-work composition persist in the finished book. Still, readers like me who forage for sub-cultural lore will find this book eminently satisfying.