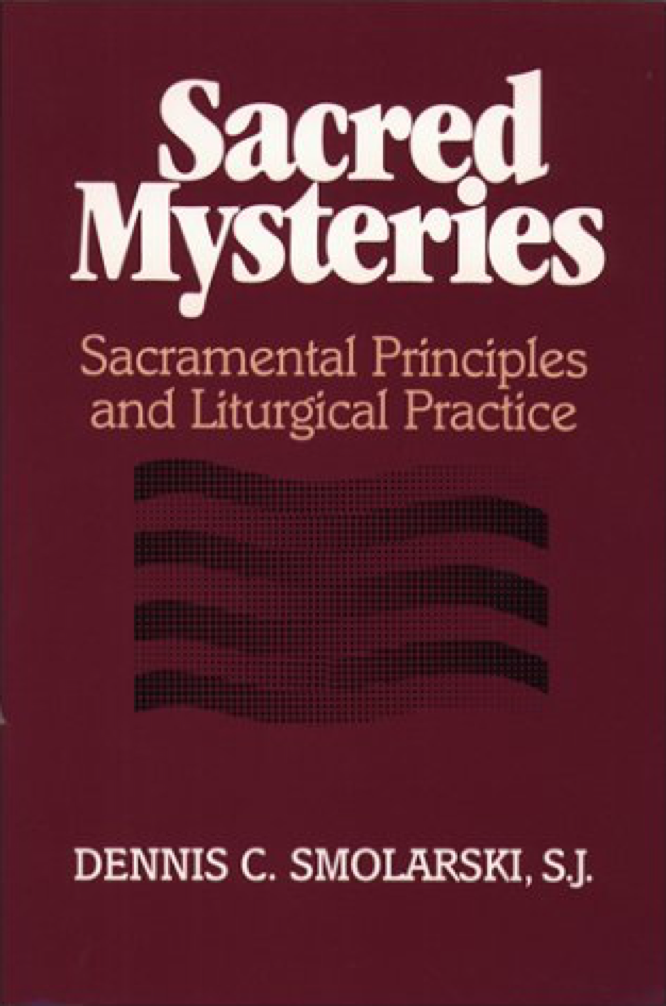 Sacred Mysteries is a book about Roman Catholic liturgical reforms, ideals, and ambitions, written by a Jesuit university instructor in the mid-1990s. It reflects a particular historical window, just over one full generation after the first set of ceremonial changes that resulted from the Second Vatican Council. Author Dennis Smolarski chooses to use the word “mysteries” interchangeably with “sacraments,” and he calls the seven chief sacraments of Catholic tradition the “great mysteries,” affording each its own chapter. When he discusses this lexical choice in his preface, he cites the usage of Eastern Orthodoxy and the Catholic Constitution on the Sacred Liturgy (1963). He raises–to dismiss it–the notion of mystery as an intellectual puzzle, but he seems content with mystery as an arena of the unknown or the unknowable, replete with emotive power. He certainly does not reference the pagan mysteries of antiquity, and he also misses the important English sense of “craft mystery,” according to which a mystery is in fact a guild: an initiated social body of practical experts. The silence about these latter meanings leaves the book’s repeating title conceit somewhat unfulfilled, considering how apposite they are.

Smolarski’s opening chapters establish his method and perspective; then follow the chapters for the seven “great mysteries” and two more for sacramental services of funerals and blessings. The last chapter is dedicated to the topic of pitfalls and and “obfuscations.” Each chapter on a given sacrament is divided into two sections. The first section is on “principles” and summarizes the historical development of the sacrament, along with theological considerations. The second section is on “practice” and discusses Catholic liturgical implementation at the close of the twentieth century.

Some of the liturgical history is worthwhile, and it is written in an accessible form, although there are certainly other books that have that topic as a more central focus. The text mentions in passing, as if it could hardly be questioned, that the eucharist “finds its origin in the family meal” (65). Leaving aside the fact that any and all eating and drinking by humans will in some sense descend from the act of family nourishment, I found that statement profoundly ignorant of (or dishonest about) the genuine historical origins of eucharistic ceremonies.

At one point, discussing the impertinence of popular American wedding customs, this book on Christian worship approvingly offers a quotation on genealogical obscurity from Antichrist Friedrich Nietzsche (115)! But a quick check of the end note shows that it is actually citing Nietzsche’s Human All Too Human at secondhand from page 2 of Celebrating Marriage, edited by Paul Covino for Pastoral Press. I imagine Covino himself got it out of a book of assorted quotations and epigrams. But it still gave me quite a laugh.

I came to this book as an overheard recommendation by a member of the clergy in my own church, although we do not administer the Catholic sacraments as such. Implicitly, the idea was that the analogy to our sacraments (some of them identically named) was sufficiently close that ministers of the Thelemic Gnostic Catholic Church (EGC) could benefit from Smolarski’s analyses. After a thorough reading, I would tend to disagree. First, the book is (properly, by its own lights) oriented toward Christian theology which is profoundly irrelevant to the work of our Thelemic sacraments. Second, it tends to deprecate and deride the Tridentine Catholic forms that were abrogated by the Vatican II reforms. To the extent that Roman Catholic liturgy has provided precedents for EGC ritual, it is exactly those older forms with their “ambience of prayer, awe, and mystery” (67) on which we draw. Finally, it is preoccupied with a specific process of institutional and liturgical reform that does not obtain in EGC.

I concur with Smolarski that liturgy is not reducible to entertainment and should avoid treating a congregation as a passive audience (e.g. 177). Secure in his large and mature institution, he is never in danger of the sort of terminological errors that are all too common in EGC, where officers will apply the jargon of modern entertainment to church ceremony, calling the ritual a “script,” the rubric “stage directions,” or the vestments “costumes.” But he happens to hit on the one sore desideratum for liturgical discourse, a term for what stage performers call “blocking.” There is no traditional ecclesiastical jargon to denote the positioning and movement of the officers in the worship space. Smolarski suggests choreography, which I think has a lot to recommend it.

Sacred Mysteries is probably a helpful book for the audience for whom it was actually written: Roman Catholic ministers and worship organizers. Despite the ongoing change that it emphasizes, it may not even be obsolete twenty years after its first publication.