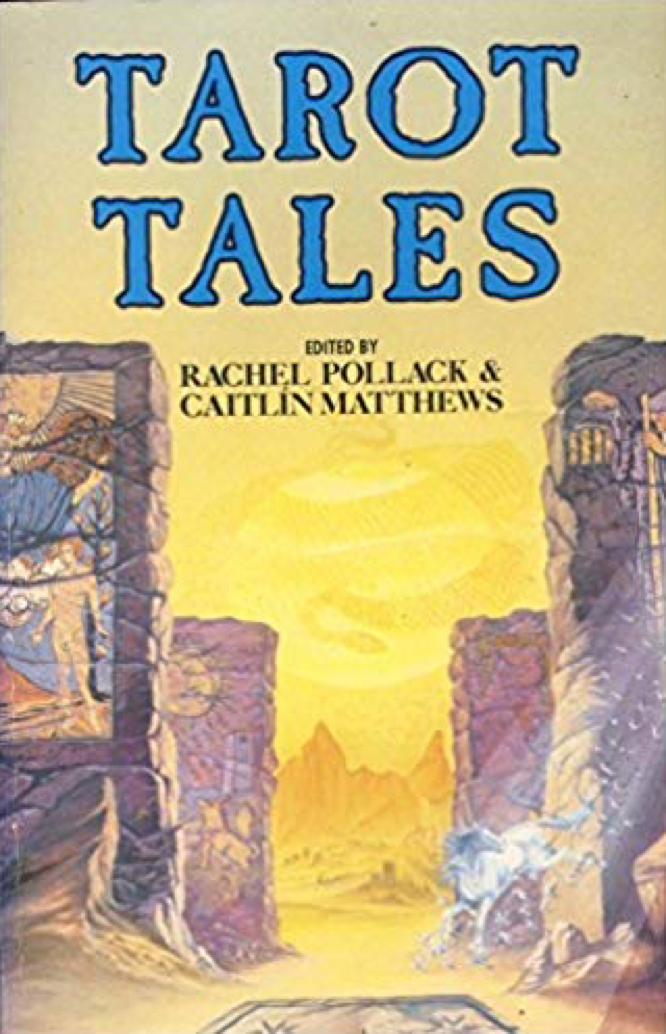 I was excited to discover this old mass-market paperback fantasy anthology in a secondhand bookshop, where it had been mistakenly (?) shelved with the occult books. It includes some of my very favorite English fantasy authors, including Michael Moorcock, M. John Harrison, and Robert Irwin. The third of these usually isn’t even classed as a genre fantasist, and an even more surprising author to see in the mix was Irwin’s fellow Orientalist scholar Peter Lamborn Wilson! Editors Caitlin Matthews and Rachel Pollack have solid credentials as Tarot savants and authors of fiction both, and each contributes a worthwhile story to the book.

All of the individual stories were commissioned for this volume, and I have not seen any of them published elsewhere. The editors’ stipulation was that Tarot should be used in the process of composing each tale. Despite the odd “Chapter One, “Chapter Two” in the story headings (but not the table of contents), there is no continuity of narrative, no shared characters, and no significantly overlapping settings among any of the stories. A few are science fiction, several are overt extensions or reinterpretations of ancient myth, and one or two are firmly in the horror genre. Moorcock’s contribution “Hanging the Fool” is a 20th-century installment of his Von Bek metatext with no supernatural elements at all, and with a nod to H. Rider Haggard. Two of the stories, “Rembrandts of Things Past” by Sheila Finch and “The Devil’s Picturebook” by R.J. Stewart, operate in a theological (as opposed to mythic) register, and I found them weaker for it.

On the whole, the tales in this volume are sophisticated and engaging. More than a few of the stories have Tarot diviners or experimenters as characters, and a handful have subsections named after trumps or other Tarot cards. In her introduction, Pollack cites Calvino’s Castle of Crossed Destinies as precedent for the sort of work included here, but the presence of Tarot in these stories is more varied and often more subtle than in Calvino’s book. The collection was first published in England in 1989, and my copy is the subsequent US release. I don’t think it’s seen a printing in the 21st century, but it’s a solid collection that I will easily recommend to those who share my tastes in fiction.