Hermetic Library Fellow John Michael Greer reviews Music in Renaissance Magic: Toward a Historiography of Others by Gary Tomlinson in the archive of Caduceus: The Hermetic Quarterly. 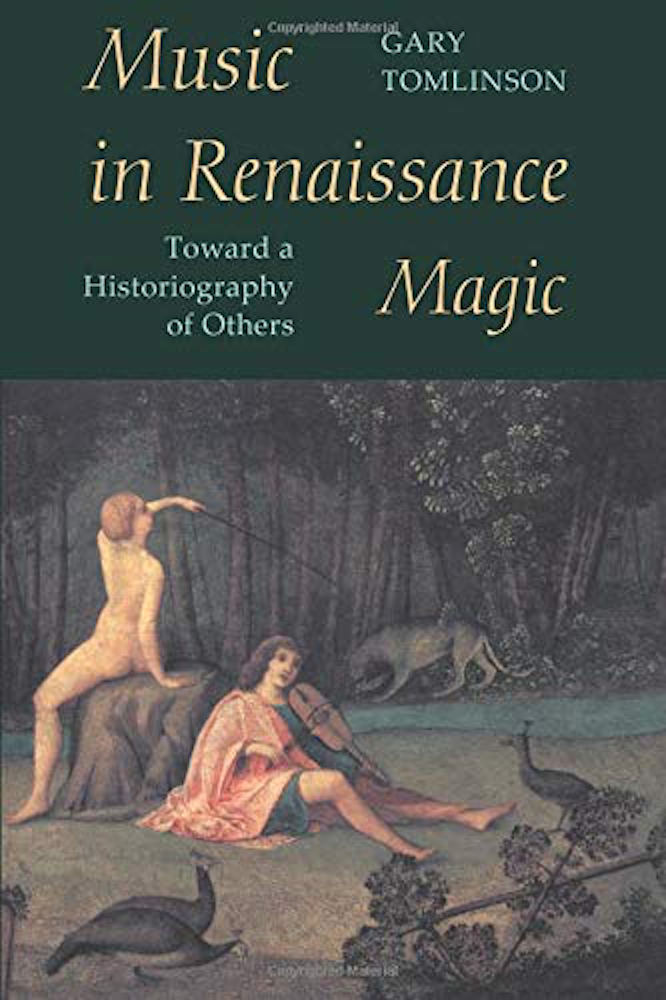 The place of music in the magical traditions of the Renaissance is a fascinating one, and has been far too little explored in either academic or esoteric circles. The musical aspects of Marsilio Ficino’s astrological magic, the role of Pythagorean harmonic theory in the broader context of Renaissance Hermetic thought, and a few other topics have been touched on by a handful of scholars; still, more work needs to be done on all of these areas, and the broader interface between magic and music in Renaissance culture as a whole remains all but undefined. In such a context, almost any scholarly contribution – however peripheral or flawed – cannot help but make some contribution to our knowledge of the subject.

It is thus frustrating to find, in Gary Tomlinson’s Music in Renaissance Magic, an exception that proves the rule. Despite Tomlinson’s obvious erudition and effort, readers who turn to this work hoping for insight or even information on the theory and practice of magical music in the Renaissance will go away disappointed.

The failure of this book has several roots, but the most obvious is the author’s inability to get past questions of current academic theory and actually deal with the material he proposes to study. Perhaps the simplest measure of this is the fact that his book quite literally devotes more space to the paradigms, categories and methodology he intends to use, and to the related viewpoints of figures such as Michel Foucault and his disciples, than it spares for its supposed subject. The same distortion of focus goes on at a deeper level as well, though, for Tomlinson consistently interprets passages from Renaissance-era works in terms derived wholly from modern academic movements such as semiotics and post-structuralist historiography. The inevitable result is that his texts are wrenched out of their contexts and often distorted in meaning as well.

One example out of far too many is his discussion of the idea of rational meaning in non-vocal music, a topic which takes up much of Chapter Four of his work. He’s quite correct in arguing that Ficino, like others of his time, saw music as a carrier of meaning in and of itself, apart from any verbal text connected with it. In making his argument, though, he uses a labored and roundabout approach derived largely from modern semiotics, and misses the obvious and defining point: that from a Renaissance standpoint, music is rationally meaningful because it derives, necessarily, from number and proportion. A little attention to the literature of Renaissance Pythagoreanism, or even to the meanings of the Latin word ratio, could have saved him (and the reader) a great deal of trouble.

What gives this pattern a remarkable irony is that Tomlinson, like other “postmodern” writers, argues at length that other (and especially earlier) attempts to interpret different cultures and times are “monologues” imposing the writer’s culturally defined reality on a passive text: a kind of intellectual imperialism, in fact, which makes the act of interpretation itself “hegemonic” in nature. In place of this, he insists, we need to treat interpretation as a “dialogue with the other” in which the differences between culturally defined realities are respected. This is a praiseworthy goal, to be sure, but one fails to see how it justifies a methodology in which snippets of a given work are taken out of context and redefined in terms completely foreign to their author and time. Ficino and his contemporaries, it should not have to be pointed out, did not write or think about the world in the ways that are currently fashionable in academic circles. Offering an interpretation of their works on the basis of, say, modern semiotic theory, while failing to explore or even mention the fact that these works defined basic issues of knowledge and existence in a wholly different way, is a suppression of their actual context and meaning that verges on intellectual dishonesty.

There is, however, a third level to these distortions of focus. Tomlinson’s discussion returns at a number of points to a remarkable and rather baffling insistence that the realm of magic is quite literally incomprehensible to modern minds. In the last chapter of his book, for example, Tomlinson speculates that the conceptual world of the Renaissance needs to be understood as one in which magic was an effective force. But: “…there emerges, as a function of our knowledge, an irreducible difference – an unresolvable alienation separating us from, for instance, Renaissance magic. We may move, fitfully, into the space between people like Ficino and us – this is what I have tried to do – but we cannot cross over to his side” (p. 247; emphasis in original). In his first chapter, similarly, he takes the time to castigate occultists, and in particular Joscelyn Godwin, the one major figure in modern musicology who has consistently defended traditional, esoteric views of music. His language here is equally curious: he speaks of “the abandonment of ourselves to occult thought” and accuses occultists of “attempt(ing) a radical dissociation of themselves from the implications – if not, usually, from the applications – of the postscientific, technological world in which they live” (p. 14).

The opposition between magic and the implications of modernity which Tomlinson invokes here is hard to defend, given the fact that our own culture – be it ever so “postscientific and technological” – is one in which magic is and always has been practiced. The tens of thousands of practicing magicians in the Western world today may be surprised to learn that an “unresolvable alienation” lies between them and the magical disciplines which are an everyday part of their lives. While the magical traditions of the present day are not identical to those known to Ficino and his contemporaries, to be sure, deep historical and genealogical links connect modern magic with its Renaissance antecedents. It’s quite reasonable, given this, to use the experience of modern magical practice as one source of insight into the world of Renaissance magic, and it’s naive (to say the least) to define magic as something which the scientific revolution somehow rendered unthinkable, given the reality of living Western magical traditions profoundly rooted in the same Renaissance background Tomlinson studies.

In this context, Tomlinson’s attempt to define the magi of the Renaissance as an incomprehensible “other” appear in a different light, if one far too familiar to modern practitioners of magic. The rhetoric about “dialogues with the other” which plays so large a role in postmodernist historiography contrasts with a continuing refusal, on the part of too many scholars, to open the real dialogue of academic discussion to truly divergent views. The “dialogue” of interpretation posited by the postmodernists is, after all, fictitious; Ficino and the other Renaissance magi, being dead, cannot speak for themselves, or object to the often cavalier treatment accorded to their writings and their views. The possibility of real dialogue with a living “other” – the “other” of living Western magical traditions, for example – is quite another matter. Such a dialogue might involve questioning some of the presuppositions of current academic thought – its a priori insistence that every aspect of human experience must be culturally created, its tendency to rely on political rhetoric in place of critical thinking, its too-frequent evasion of moral questions, and the like. It may not be surprising, then, that this particular “dialogue with the other” is one which Tomlinson seems quite eager to avoid.