Hermetic Library Fellow John Michael Greer reviews Tetragrammaton: The Secret to Evoking Angelic Powers and the Key to the Apocalypse by Donald Tyson in the archive of Caduceus: The Hermetic Quarterly. 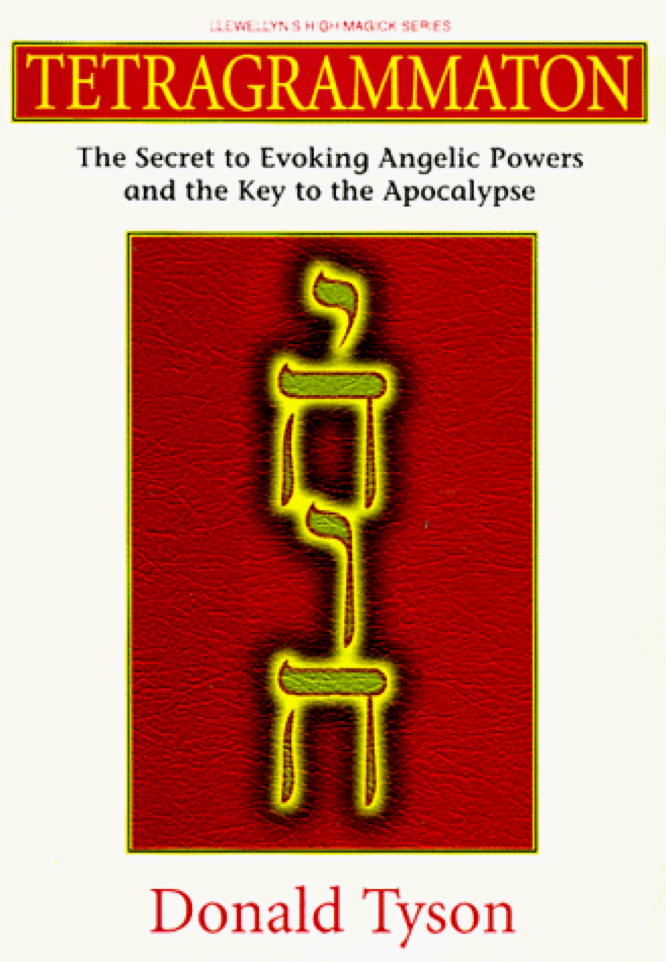 Most modern Hermeticists are familiar with Donald Tyson by way of his erudite and highly useful annotated edition of Henry Cornelius Agrippa’s Three Books of Occult Philosophy (Llewellyn, 1993). This new book of Tyson’s has many of the strengths of that earlier work, and it fills a space in the literature of the Western magical tradition which, until now, has been largely vacant. At the same time, though, it suffers from several perplexing failings, which should be kept in mind by those who study or practice the material it covers.

The strengths of the work are substantial enough that they deserve to be considered first. The Tetragrammaton – the four-lettered Hebrew Name of God which, in Latin letters, is spelled YHVH – is a continuing presence throughout the history of esoteric spirituality and magic in the West. Tyson traces this history ably, touching on many of the correspondences and applications of the Name in Jewish, Christian, Hermetic, Gnostic and magical sources, including such rarely-considered matters as the Christian Hermeticist doctrine of the Pentagrammaton and the inner geometries of John Dee’s Monas Hieroglyphica. The twelve Banners of the Name, permutations of the Tetragrammaton’s letters which are assigned to the twelve signs of the Zodiac and the twelve tribes of Israel, receive a great deal of discussion; he presents a set of correspondences and interpretations for the Banners which, although they differ from the traditional ones, are certainly useable in practical terms.

From the symbolism of the Banners and a passage from the Book of Revelations, in turn, Tyson derives what is certainly the most valuable part of the book: the discussion of the Wings of the Winds, an order of twenty-four angelic spirits which can be evoked and commanded through a series of ritual workings he gives in detail. The symbolic generation of the Wings and the ceremonies used to summon them show Tyson at his best, making skillful and creative use of a great deal of abstruse magical lore, and they deserve to be studied as solid examples of the way modern and traditional perspectives can be effectively combined in magical practice.

A less productive aspect of Tyson’s book is his insistence that his particular system of correspondences is the only true one, and other (and usually older) versions are either deliberate “blinds” or simply wrong. If the diversity of the world’s magical systems teaches anything, it is that correspondences are symbolic languages, and thus useful rather than true; to say that one particular set of correspondences is “correct” is like saying that French is true and all other languages are false. Similarly, it’s not usually a useful idea to insist, as Tyson too often does, that any pattern of symbolism that doesn’t make obvious rational sense must be garbled or wrong. It’s often precisely those elements of symbolism that evade easy comprehension that have the most to teach.

A far more serious weakness in this book, and a much more puzzling one, is the way Tyson interprets the Enochian system of magic created or received by the Elizabethan mage John Dee and his scryer Edward Kelly. Tyson’s contention, developed at length in the book’s final chapter and a lengthy appendix, is that this system is nothing less than “a complex ritual working whose sole purpose is to open the four sealed gates of the Watchtowers, allowing the entry of the great Dragon, Coronzon or Satan, who will bring about the final destruction of the manifest universe.” (p. 186). He takes this claim very seriously, suggesting that the proper use of the Enochian keys will result in a quite literal apocalypse in which “Coronzon will transform the universe into a suitable dwelling place for himself and his ministers, in the process destroying the human race…his sovereignty over our blasted universe will be of brief duration, but this will yield scant consolation to those billions who are slaughtered by war, famine, plagues, and natural disasters” (p. 237).

This section of the book raises a whole host of questions, few of which are satisfactorily answered. Tyson offers little in the way of evidence for his interpretation; he simply presents it as fact, and develops a reading of the Enochian Keys based on the assumption that he is correct. He correctly points out that imagery from the Book of Revelation appears throughout the Enochian material and Dee’s diaries, but gives no reasons for believing that these images should be taken literally – or more seriously than, say, the prophecies of Mother Shipton. He suggests that errors in the system are the only reason Coronzon has not yet put in an appearance, and then proposes various corrections – surely an odd thing to do, if these same errors are our best hope of staving off Armageddon!

A good deal of the material in this section seems to derive from the same kind of overly literal reading of the Book of Revelation that shows up in so much fundamentalist writing on the subject. Like so many other modern readers, Tyson may not have kept in mind the intensely symbolic nature of apocalyptic literature, or paid enough attention to the many uses of apocalyptic imagery in the social, religious and political world in which Dee and Kelly lived and performed their magic. Still, it seems at least possible that there’s one other influence at work, consciously or not, in Tyson’s interpretation. With its images of cosmic doom and its allegations that Dee and Kelley were unwitting pawns in a diabolical plot on the part of malign supernatural powers, this entire section of the book reads remarkably like passages in the fantasy fiction of H. P. Lovecraft. The similarities in theme and tone are striking enough that one almost expects to see references to Yog-Sothoth and the Voorish Sign.

Perhaps Tyson will devote the whole of a future book to his interpretation of the Enochian material, and provide more in the way of justification for his claim. In the meantime, his work on the Tetragrammaton remains a useful contribution, but one which needs to be read carefully, so that the wheat can be separated from the millenarian chaff.