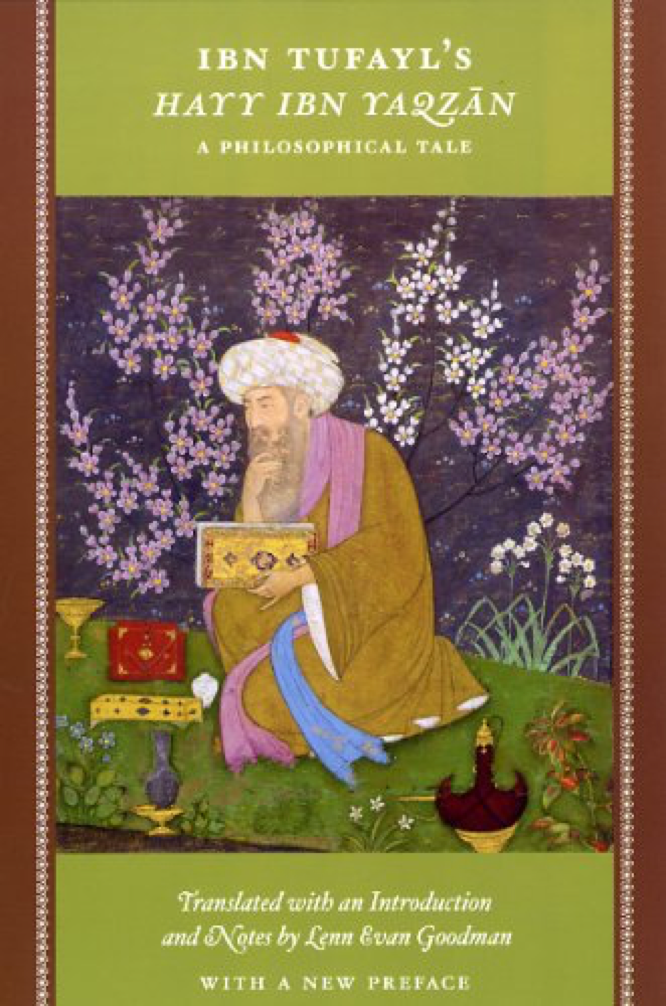 Ibn Tufayl was a medieval thinker and an heir to the oriental philosophy of Avicenna (Ibn Sina) and the scholarship of Algazel (Al-Ghazali). His work Hayy Ibn Yaqzan is a fable treating the life of an ideal man who comes to physical, intellectual, and spiritual maturity outside any human community. Only in the final pages of the tale does Hayy encounter society, culture, and religious tradition, and the encounter is a disappointing one in many respects.

The narrative itself is reasonably compact, but the University of Chicago 2009 edition of the English translation includes a great deal of useful apparatus. Translator Lenn E. Goodman supplies two prefaces and an introduction. The 2009 preface is primarily concerned with the historical context of the original work, outlining the Almohad patronage for Ibn Tufayl’s work, but it also concludes with a view of the change in philosophical context for Goodman’s work, since the 1960s when he first read Ibn Tufayl. The 2003 preface is shorter and more autobiographically focused. The 91-page introduction includes far-ranging comparisons and a theory of religion as a tripartite phenomenon that appears to be original with Goodman, and is definitely food for thought in its own right.

Goodman’s end-notes are extensive, and so useful to the contemporary reader that they made me resent (again) the 21st-century publishing preference for end-notes over footnotes. I’d prefer to read with a single bookmark, thanks. He calls out likely sources, Quranic citations and allusions, and comparisons to medieval, classical, and modern philosophy. Wide prior reading is necessary in order to make the most of these.

Ibn Tufayl’s story has been compared to Kipling’s Mowgli from The Jungle Book: Hayy is raised by a doe rather than a wolf, and his feral nature is correspondingly peaceable. There are no large predators on the island where he is the only human. Even more interesting comparisons can be drawn with Robert Heinlein’s 20th-century science fiction novel Stranger in a Strange Land, itself consciously derived from the Mowgli archetype. Like the Martian protégé Valentine Michael Smith, Hayy discovers a religious vocation when introduced to society. He hopes to “save” others by orienting them to the mystical appreciation of the human condition that he was able to achieve in his exotic circumstance.

At the end, Ibn Tufayl claims that his story of Hayy is the heritage of “a hidden branch of study” (165), as he had promised at the outset in intending to “unfold … the secrets of the oriental philosophy” (95). It is esoteric in both the colloquial and the Straussian senses, though it is not occultist. I am grateful to the fellow initiate who directed my attention to it, and I expect to return to the study of this text in future years.