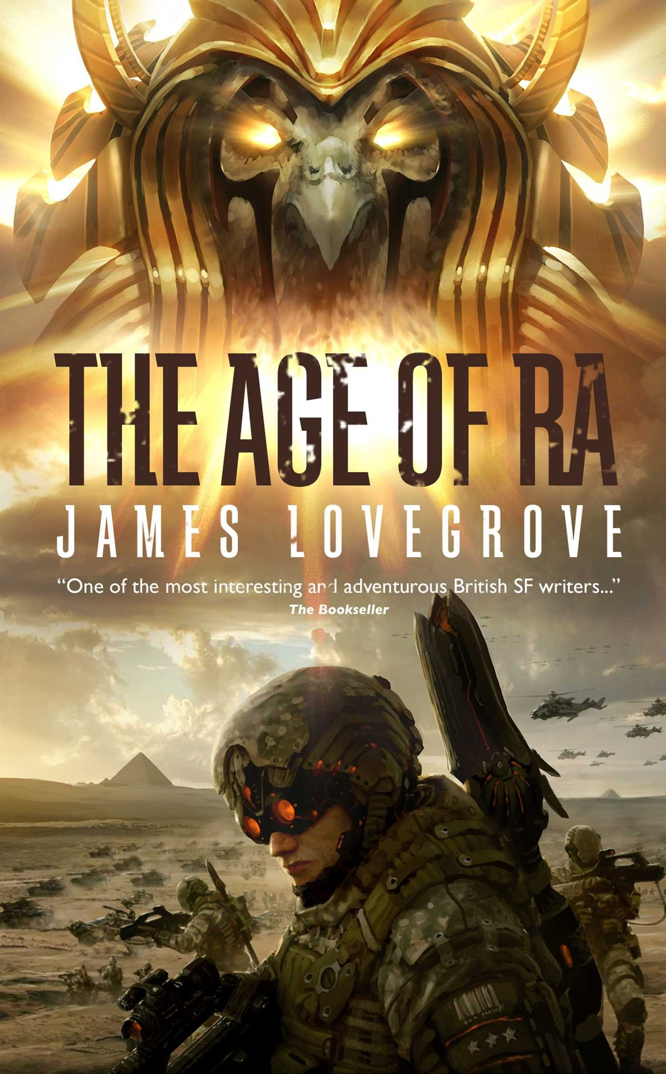 The Age of Ra is a fast-paced, testosterone-laden adventure set in an alternate present where the gods of ancient Egypt have been visibly ruling humanity since the early 20th century. On p. 101, author Lovegrove quickly sketches the global theo-political scenario in which various international blocs have aligned under the principal deities. Priests manage ba energies granted by the gods, and these power a wide range of fanciful military hardware. The alternate history isn’t worked out in great detail, and I failed to find the rationale for it compelling, but the setting is original and well-constructed. The premise of the action is that Egypt (or “Freegypt”)–the world’s only country not under specific divine patronage–incubates a movement against the theocratic system, and the protagonist is a British military officer who gets caught up in the course of events. The plot moves forward satisfyingly through short chapters, with occasional interludes taking place on the plane of the gods.

The characters are credible, though often a bit stereotyped. Lovegrove is given to the occasional wayward simile, but on the whole, the writing is efficient and palatable. There is a sort of grisly 21st-century action cinematic feel to it. There’s no profound philosophy or psychological insight here, but some appreciable entertainment.

Some suggested music to accompany this novel:
“Bad Blood” by Ministry
“Face in the Sand” by Iron Maiden
“Daughter of the Desert” by Transglobal Underground
“Master of the Universe” by Hawkwind
“Godwhacker” by Steely Dan
“War Pigs” by Black Sabbath
“Hem of Your Garment” by Cake
“Veteran of the Psychic Wars” by Blue Oyster Cult

I suspect if you don’t like heavy metal, you wouldn’t much groove on this book anyway. One reviewer remarked that his wife thought the paperback cover looked like game packaging (my Other Reader called it “lurid”), and I’m sure this book could be the basis of a solid MMOFPS.