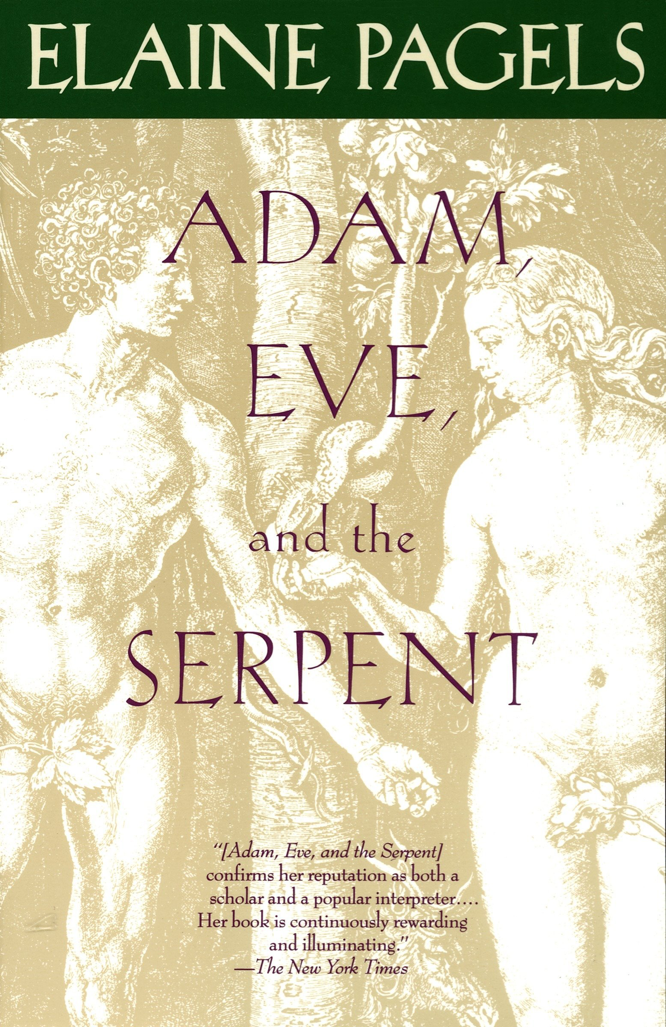 In her epilogue to Adam, Eve, and the Serpent Elaine Pagels insists that her ambition in this book is neither to discover nor to indicate the nature of the “real Christianity.” In that case, she could have avoided a lot of the confusion raised by her presentation, if only she had been a little bit more skeptical about the original message of “Jesus,” whom she quotes–on the basis of the canonical Gospels–as blithely as she cites the writings of Augustine or any of the other Church Fathers. She knows well enough that “the gospels of the New Testament are neither histories nor biographies in our sense of these terms,” (5) but she still handles them as though they might serve in those capacities.

Still, for a book that is designed to straddle the line between scholarship and popularization, Pagels does a good job. And her topic couldn’t be more interesting. She traces the development of Christian interpretations of the Edenic myth of Genesis, and how they were used to formulate and express ideas about sexuality, politics, free will, and guilt. She accepts the Luke-Acts epic as though it were history, and even so, manages to demonstrate important facts about the history of early Christianity: its diversity (with a chapter on “Gnostic Improvisations”) and its profound difference from the Augustinian orthodoxy that underlies nearly all modern Christianities.

Her treatment of Augustine is fascinating, and she claims to have been as surprised herself by the results of her research as most of her Christian readers will be. Although she was originally sympathetic to Augustine from her readings in his Confessions, On the Trinity and The City of God, her effort to reopen a conversation forcibly closed by papal authority in April 418 C.E. led her to the dialogue between Augustine and the Pelagian naturalist Julian of Eclanum. In contrast with the traditional secondary sources, Pagels finds Julian thoughtful and scripturally attentive. Augustine, whose Opus Imperfectum Contra Julianum has never been published in English translation, seems “idiosyncratic” and tendentious in his novel doctrine of congenital human depravity.

In Pagels’ account, the combination of Augustine’s theological innovations with the establishment of imperial Christianity resulted in the rejection of an earlier Christian ethos of freedom, and its replacement with one of guilt. This study deserves the careful consideration of everyone who thinks that they have read and understood Genesis 3:16-19, since hardly any readers, medieval or modern, have been able to approach the Edenic myth without the long Augustinian shadow of “original sin” cast upon it. Before Augustine, Justin Martyr could say to the prefect who condemned him to death: “Do what thou wilt: we are Christians.” (49)