Hermetic Library Fellow T Polyphilus reviews Dangerous Games to Play in the Dark: A Guide to Summoning Spirits, Divining the Future, and Invoking the Supernatural by Lucia Peters. 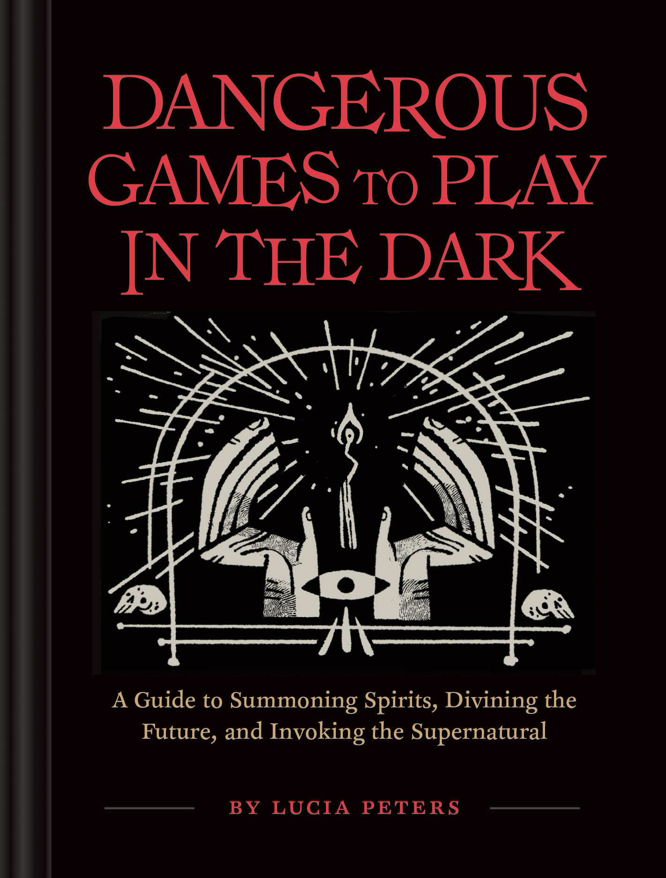 Dangerous Games to Play in the Dark is a curious little artifact. It’s pretty in a way that one expects to be on offer at Hot Topic: a duodecimo-sized hardcover with black paper-coated boards, small black and red type, and red page edges. The “games” in the book are a variety of practices assuming or implying paranormal influences, but largely devoid of metaphysical assertions. Author Lucia Peters’ introduction situates these historically in a descent from 19th-century spiritualism through parlor games to “sleepover” activities. In the end-matter, she cites her sources, the majority of which are online. There is an undertone of anthropological folklore study to the preliminary descriptions of these practices, but the text is structured as rules for twenty-four games, with a uniform title page for each specifying its “Risk level,” “Objective,” “Additional Warnings,” and “Reward.” The diction throughout is cautionary and portentous, patently intended to spook the reader. The imperative mood predominates.

None of the “games” are competitive, beyond the basic I dare you sensibility built in to the social context of their transmission. Some must be played alone, some require collaboration, and some are flexible about the number of players. The best-known of them is given in full detail at the outset: “Light as a Feather, Stiff as a Board,” which Peters traces back to the 17th century. It is easy to imagine that this particular practice has been passed down among children from the Middle Ages onward, or even from antiquity. While the physical hazards of these games are usually quite limited, with candle-flame standing out as a common one, their “dangerous” character will tend to stem from the psychological (or psychic?) condition of the players.

The subtitle characterizes the book’s content with reference to various occult practices: “Summoning Spirits, Divining the Future, and Invoking the Supernatural.” But as I mentioned above, there’s really precious little metaphysical baggage involved. To the extent that these games might have whole-cloth applicability for occultists, they will likely appeal most to surrealists, practitioners of chaos magick, and other non- or anti-traditional schools. As post-modern society descends into epistemic closure, “the dark” that is the context for games like these looks temptingly like an operating system prompt allowing the experimenter to run routines outside of the quotidian program of reality. Those who manage to injure or frighten themselves with practices from this book might seek relief in the safeguards of more traditional occultism, or even the mind-closing sorcery of conventional religions.

The safest way to consume this book is as mere textual entertainment, simply imagining what it might be like for someone to play these games. Treated in this fashion, it is a fast read supplying access to the “weird, creepy things” for which Peters expresses affection. Left to sit unread on the shelf, it remains small and attractive.