Hermetic Library Fellow T Polyphilus reviews How to Rule the World: A Handbook for the Aspiring Dictator by André De Guillaume. 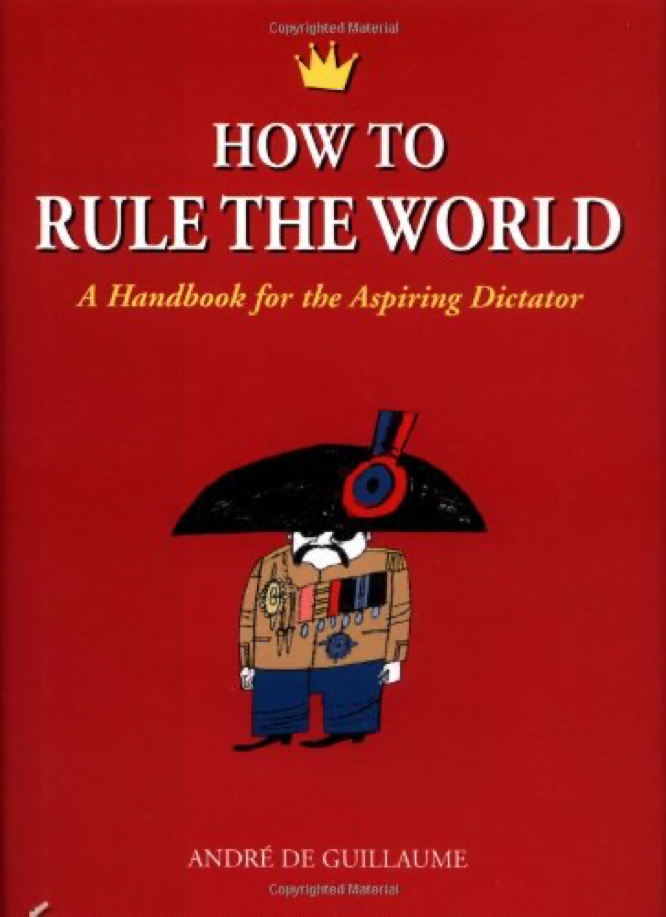 This little “Handbook for the Aspiring Dictator” made an interesting contrast to another book I was recently reading at about the same time, The Secret School of Wisdom. Both are seemingly heterodox takes on political science with an overarching didactic emphasis, although How to Rule the World is presented as humor from a failed leader of a coup d’état attempted in the 1970s and The Secret School collects translated documents from a secret society suppressed in the 1780s. How to Rule the World expresses a philosophy of governance nearly diametrically opposed to the one encoded in the old Illuminati documents. It is full of quotes and anecdotes from named personalities (versus the rigorous anonymity of the 18th-century documents), and it stresses the exploitation of social resources for individual aggrandizement (versus the cultivation of individual resources for the elevation of society).

I enjoyed Robin Chevalier’s cartoons that pervasively illustrated How to Rule the World. Although the Chicago Review Press has tagged the book “HUMOR” on the corner of the back cover, the satirical elements failed ever to wring a laugh out of me. “It’s funny because it’s true” doesn’t necessarily stick in our second-time-as-farce society. “American real estate developer and mogul” Donald Trump is quoted as a dictatorial exemplar (“Money was never a big motivation for me, except as a way to keep score,” 95). But by that point in my reading, I had already recognized his style in some of the author’s direct instructions, such as this from the section on “Decision-making”:

“In a dictatorship, all-powerful rule centers on making things happen. In coming to any decision, therefore, there are just two things to consider:
– Will my decision confound my enemies?
– Will it make me richer?” (69)

This book was published during the US administration of George W. Bush, who is mentioned only in passing as an “ambitious ruler” with “a big idea” (89). I guess I could have enjoyed it more if I weren’t able to recognize so many of the attributes and propensities of its historical and hypothetical dictators in the current governing class of our putative democracies.