Hermetic Library Fellow T Polyphilus reviews Blood of Baalshandor by Richard Lee Byers. [Note: the only place I currently find this in stock is at Miniature Market. But, presumably, it will show up in the usual places eventually, such as Amazon] 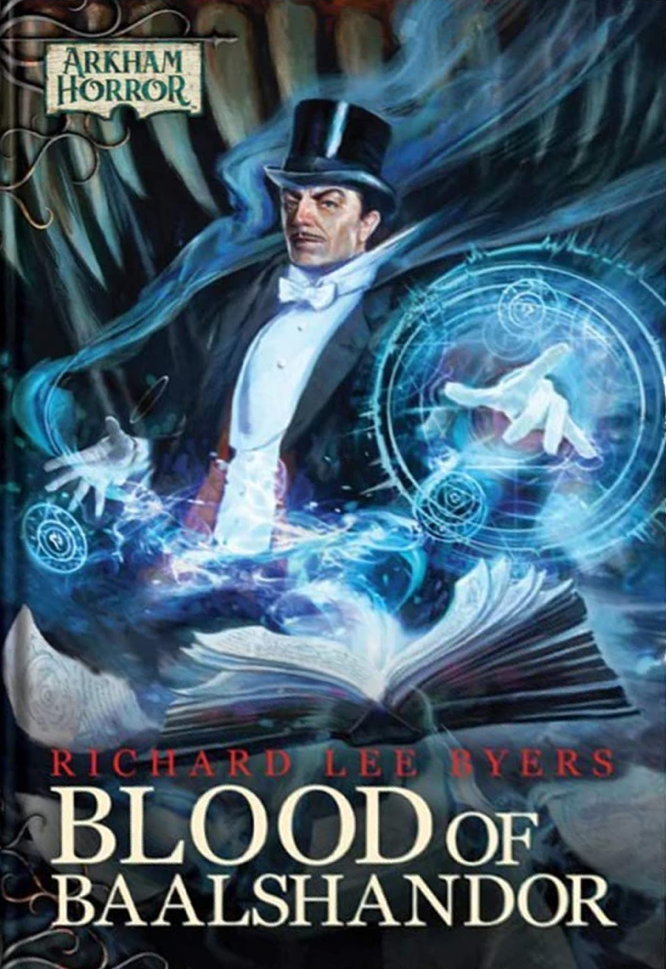 After five Arkham Horror investigator novellas there was a hiatus, and the Dexter Drake entry Blood of Baalshandor is the first to appear for two years. In format it resembles its predecessors: a slender hardcover of about a hundred pages, with a color-illustrated appendix on glossy paper, and a little set of promotional Arkham Horror: The Card Game cards for the Dexter Drake character.

I had high hopes for this one, because the Dexter Drake chapter in The Investigators of Arkham Horror was my favorite from that book. Dex is a WW I veteran and a successful stage magician as “Drake the Great.” His childhood interest in magic has led him to both his career in legerdermain and an interest in actual sorcery. The Blood of Baalshandor centers on his relationship with his “lovely assistant” Molly Maxwell (“the Exotic Morgana”), with conflict generated by his coming out of the closet with respect to his occultist beliefs and the phenomena that she is then subjected to. The early part of the book has a nice Ninth Gate (i.e. Club Dumas) vibe, as Dex and Molly attend an underground auction of occult books and paraphernalia in Arkham.

The Blood of Baalshandor is the second Arkham Horror novella by author Richard Lee Bryers (the first instance of a returning author in the series), and I liked it better than his earlier entry Ire of the Void, although that one was pretty good. It furnishes a lot of subjective details about the working of magic in the Arkham Files setting, as Dex uses spells cobbled together from loose pages of the Necronomicon invoking the demon Yaztaroth. [ . . . (hover over to read this spoiler) . . . ]

The cards set Dexter up as a mystic-class character with additional access to rogue-class cards, and a special ability that enhances his use of assets. Besides the signature cards Molly Maxwell and Yaztaroth, the story also alludes to various established elements of the game, such as the level-1 rogue card Lockpicks, a natural part of Dex’s escape artist kit. I’m very much looking forward to trying out a Dexter deck soon.