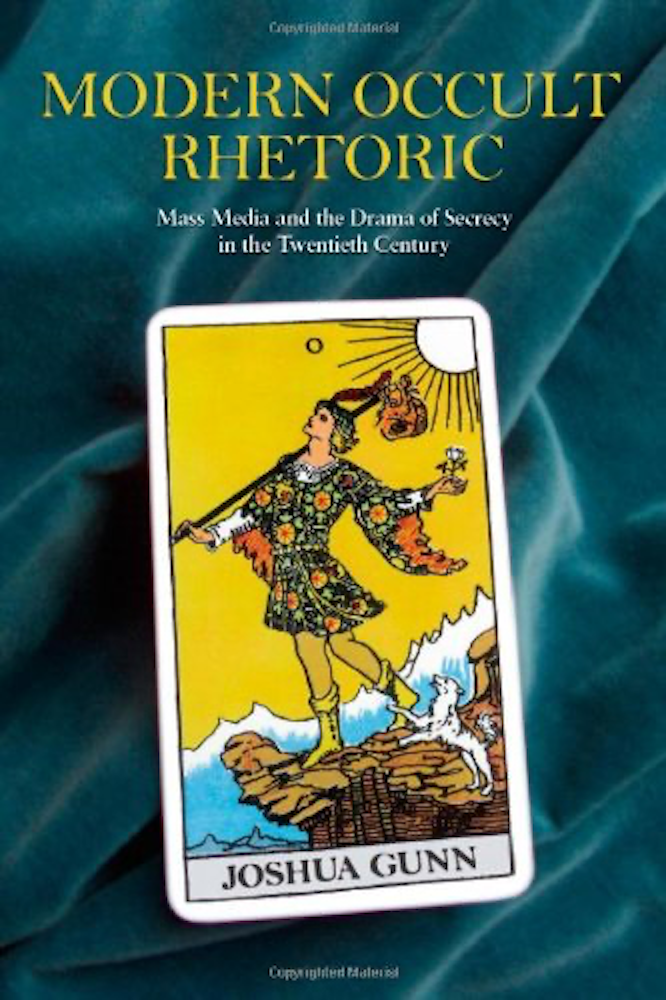 In Modern Occult Rhetoric, Joshua Gunn asks a lot of worthwhile questions regarding some of my most fond subject matter. But his answers tend to be frustratingly ill-informed. Gunn develops and illustrates his theoretical positions by means of several case studies in a historical sequence: these concern the writings of H.P. Blavatsky, the work of Aleister Crowley, Anton LaVey’s Church of Satan, the Satanism scare of the late 1980s and 90s, and Roman Polanski’s film The Ninth Gate. He concludes that occultism has been irrevocably disrupted by modern mass communications, but that its core rhetorical mechanisms continue to operate in other fields, most particularly theory in the humanities.

For an avowed and credentialed rhetorician, Gunn’s diction is annoying as hell. He refers time and again to “the popular imaginary,” once even setting it in opposition to “the individual imagination.” He does not admit himself to be drawing on some other theorist’s use of this odd phrase, nor does he offer his own rationale for it. He uses “presence” as a transitive verb (44). He says “great white chief” (as Chief Seattle is supposed to have addressed the President of the U.S.), when he evidently means a secret chief of the Great White Brotherhood (86). He says we are “trapped in our own symbolicity” (211). And after all this, he has the vapid effrontery to mock Aleister Crowley for using “sublime” correctly—if metaphorically—as a verb (95). Most significantly, Gunn presents the word “occultic” as his original coinage to refer to a secularized rhetorical form possessing devices originally characteristic of occultism. In making this poor choice, he seems ignorant of the fact that “occultic” has already been in wide use among Americans, especially evangelical Christians, as a merely pejorative synonym for the adjectival form of occultist. He also seems not to appreciate that 19th-century occultism itself was already a significantly secularized form of earlier esoteric traditions. In fact, his definition of occultism as a “theological form” is never presented clearly, and he considerably overemphasizes the etymological sense of “secrecy,” without ever discussing the matter and boundaries of the traditional occult sciences.

This failure to clarify his own usage of “occultism” does not keep him from wrongly and repeatedly announcing the demise of whatever he thinks it was. He insists at the outset that occult and occultism “no longer exist as terms for a coherent tradition,” an expiry that he bewilderingly assigns to the end of the 20th century (xxii). He does provide what he calls a “traditional origin narrative” of occultism (8 ff.), but he doesn’t indicate the narrating representatives of the tradition in question. He cites a small handful of non-occultist scholars, while occultism itself is perennially rife with alternate and competing histories. Gunn’s appeal to such an “origin narrative” ultimately seems to be a mere license for violating positive history and an excuse for sloppy research. For example, he is confused about the status of magic in antiquity, and fails to explain how it relates to the origins of occultism. In his gloss on Renaissance magic, he badly misconstrues the context and motivation of John Dee and Edward Kelly (13-14).

Unfortunately, the errors are not confined to this contextualizing preamble, but continue with his case studies. The section on the “occult poetics” of Madame Blavatsky is not too bad, and started to reassure me–after the dismal “traditional origins” section–that there might be a lot of worth in this book. But the following chapters on Aleister Crowley dashed this hope soundly. Biographically, Gunn buys into the great myth of Crowley’s “sad and lonely” senescence (162). He builds a poor case for Crowley’s sexual chauvinism on the basis of incompetent readings, and with such false details as the “inability [of women] to master the highest grades of the A∴A∴” (297 n. 20 & 280-1 n. 51).

Gunn’s incapability as an exegete of Crowley’s writing becomes painfully evident when he explains a passage that refers to Parzival a.k.a. O.I.V.V.I.O. and Hilarion (i.e. Charles Stansfeld Jones and Jeanne Foster) as referring to Aleister and Rose Crowley. In the same section, Gunn offers readers such clueless observations as “Frater, or brother … is a grade in Crowley’s secret order, the ‘Silver Star,’” and that O.I.V.V.I.O. is what you get “[w]hen ‘Parzival’ is phonetically translated into Hebrew” (131). The fellow is clearly out of his depth. I have no pity, though, when Gunn neglects essential and easily-obtained sources with respect to the questions that he seeks to raise regarding epistemology, authority, and rhetoric in Crowley’s works. Most egregiously he betrays no knowledge of the existence of Crowley’s Book of Lies or of “Liber Oz.” Gunn’s efforts to correlate Crowley’s writings with postmodern and poststructuralist theory could have been considerably improved if he had bothered to read Scott Michaelsen’s various essays in that vein in the latter’s Portable Darkness: An Aleister Crowley Reader.

But the worst of Gunn’s mistreatment of Crowley comes in the form of what he assures us is a “sympathetic close reading” of The Book of the Law. An overview that begins by declaring The Book of the Law to be “a short work of verse“ generally goes downhill from there (86 ff.). Although the entire text of The Book of the Law is reproduced accurately in an appendix to Gunn’s book, he makes multiple errors in quoting specific passages (90). And his “sympathetic” conclusion is that Crowley was either lying or deluded about the authorial circumstances of the book, the text of which is furthermore “clichéd … overwrought … overdone” and “very ugly” (91, 97). It is unintentionally ironic that Gunn should refer to “The Book of the Law and its metacommentaries.” (104, my underscore) First, Gunn really means “commentaries,” and the “meta” is just a typical perversion of vocabulary on his part. But there is in fact a key metacommentary to The Book of the Law which Gunn very efficiently and culpably ignores: the Tunis or “Short” Comment. Although it accompanies most texts of The Book of the Law, it is omitted from Gunn’s appendix. This 102-word comment admonishes the reader that “The study of this Book is forbidden,” and proceeds to offer further challenges that undermine many of Gunn’s shallow claims about the dangers of “undemocratic occult pedagogy” in Crowley’s work.

Moving on to his treatment of Anton LaVey’s Church of Satan and the subsequent Satanism scare, Gunn seems to have done somewhat better homework with the details, but his larger argument is still weak. He neglects to provide an adequate rationale for focusing on the Church of Satan as the paradigm of occultism in the late 20th century. Why not look at pop ceremonialist magic, or at Wicca, or at neo-Tantra? The answer seems to be that Satanism gives him what he perceives as a clear case in which an image of occultism became detached from its initial producers and returned to falsely indict them. But not only is this phenomenon of questionable application to a wider spectrum of contemporary occultism, it is also not the least bit historically unprecedented. A particularly parallel instance can be found in 19th-century anti-Masonic scares.

The “death of the Magus” that Gunn assigns first to the end of the 1900s, and then slides around to various points of the 20th century, is incredibly overplayed. He imagines a 19th-century naïveté regarding occult phenomena that is belied by such signal events as the famous SPR investigation of Blavatsky. The use of quasi-occultist lore as an entertainment commodity, of which he makes so much in connection with the putative extinction of occultism, was amply evinced in the 1800s in Victorian Gothic novels and a sea of Penny Dreadful periodical literature. Far from killing occultism, such commodifications—then and now—help to ensure its cultural currency.

In general, Gunn’s treatment of the topic of secrecy is hobbled by an assumption that the essence of secrecy consists of privation and mystification. He thinks of secrets as the property of others. But those who have benefited from involvement in doctrinal societies that employ formal secrecy know better: effective initiation makes secrets into something more profound for their possessors. He could have learned this fact from Crowley, even in the particular texts that he cites. As far as his rhetorical theory goes, Gunn is on much firmer and more productive ground when he identifies irony as the “master trope of occultism” (215).

As the book nears its conclusion, Gunn offers an “allegorical” exegesis of the Roman Polanski movie The Ninth Gate, intended to read it as a parable regarding the status of occultism after its demise. Many of Gunn’s individual observations about The Ninth Gate are reasonably cogent, but it is annoying that he should repeatedly call it a “failed film”—either on the grounds of its poor box-office returns for the clumsily-promoted theatrical release or a polling of professional critics. It is also curious that Gunn missed the widespread lore connecting Anton LaVey with Polanski—evidently a false rumor started by LaVey or his partisans in order to use the success of Rosemary’s Baby to augment the prestige of the Church of Satan.

Gunn’s materialist economic class analysis of 21st-century occultists (I thought there were no such creatures?) is broadly accurate, but his attempt to contrast it with earlier periods is typically undiscerning (170-1). He is evidently unfamiliar with the socio-economic origins and circumstances of key occultists like P.B. Randolph, Jules Doinel, MacGregor Mathers, and Theodor Reuss. The book’s repeated mischaracterization of Crowley as an “aristocrat” in a literal sense just doesn’t make it so. (Crowley was distinctly a product of the affluent bourgeoisie.) And this same inaccuracy is attached to what seems to be a willfully obtuse insistence that Crowley was being “disingenuous” when he called for a spiritual and moral aristocracy in contradiction to the prevailing system of social class (155-160). Further, when Gunn tries to relate his notions of occultism to racial contexts and rhetoric, the results are shockingly boneheaded (225-6).

Ultimately, I found much of this book to reflect a disappointingly narrow perspective. For all his liberal secular jargon, there’s something basically Protestant about Gunn. (He does confess his Evangelical upbringing on pp. 109-110.) That’s how he can affirm with Kierkegaard that “religious authority is ultimately rooted in something manifestly absent” (118-9). It’s also why he accepts and deploys an implicitly universal distinction between “[t]he two main rhetorical traditions—the Hellenistic, represented by the ancient Greeks, and the Hebraic, represented by the Old Testament prophets,” (123) which made me feel like I was reading scholarship that was a couple of centuries old.

Gunn has a valid point, illustrated at the outset, and reiterated in the conclusion of his study, that there are similar rhetorical strategies involved in the construction and deployment of authority in both occultism and academia. In fact, modern occult traditions and the academy are both doctrinal institutions formed under related social and economic conditions. Correctly supported, Gunn’s basically apt thesis about their congruence should inspire a sense of legitimately uneasy kinship between these two fields, as well as better understandings of the operation of secrecy and irony as relational functions rather than classes of discursive objects. Considering the ubiquitous weaknesses of this study, however, I for one would never cite Gunn to advance even those generalizations where I happen to think he is correct. All too often, the results of Gunn’s research seem to reflect the admission he makes with respect to a fieldwork encounter with some contemporary Theosophical types: “I never listened … convinced I knew what I would hear” (34).