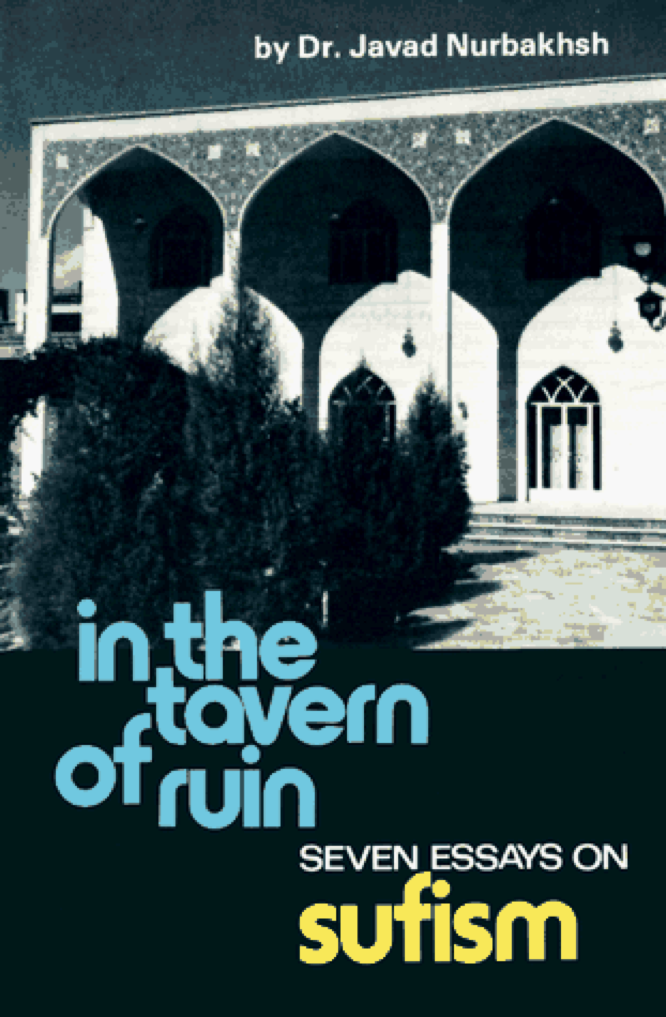 Javad Nurbakhsh was the longtime head of one of the schools of the Nimatullahi Sufi order. His organizing was originally based in Iran, but he was instrumental in bringing this order (or tariqa) to the West, both prior to and more so after his emigration following the ascension of Iran’s revolutionary government. When this edition of In the Tavern of Ruin was issued, it included fifteen postal addresses for the order in the US and Europe–although it is not specified whether these were all actual locations of khaniqas, or simply contact addresses.

“The Tavern of Ruin” is a name for the “spiritual state” that succeeds fana (i.e. annihilation, translated by Nurbakhsh as “self-having-passed-away-in-God”), and is thus parallel to the City of the Pyramids in Thelemic parlance. The book under this title is a collection of five essays, a lecture, and a FAQ. The lecture and the FAQ, being both very general in scope, have a certain amount of redundancy between them. Throughout the collection, which is listed as the first in a numbered series of Nurbakhsh’s works, there are block quotes from past Sufi masters, usually in poetry, at a rate of one or two per page.

The essay on “Steps of the Path” is a very wide-angle view, more concerned to stress the nature of Sufi attainment than to review the details of the process. By contrast, the “Sama” essay, regarding the Sufi’s mystical experience of music as a specific practice, is quite technical and prescriptive. Another piece of the latter type is “The Rules and Manners of the Khaniqah,” which concerns itself with the governance and customs of the residential facilities (or profess-houses) of the Nimatullahi Order. I found this piece to be of special interest; it comprehends ethical, ritual, and cultural topics. The final essay of the book is “Master and Disciple,” which provides a distinct Sufi perspective on the traditional mysticism of guru yoga as deployed in many systems, including that of A∴A∴.

In several of the texts in this volume, Nurbakhsh goes out of his way to remonstrate against false Sufis. Despite a genuine ascetic tradition in the history of Sufism, he insists that asceticism is essentially foreign to Sufi work, and that ascetic practices are only prescribed therapeutically for certain aspirants. As an organizer, Nurbakhsh was understandably concerned about fakirs and “those who call themselves Sufis” confusing aspirants and soiling what he saw as an integral tradition. The non-Nimatullahi reader may take some of these statements with a grain of salt, however.