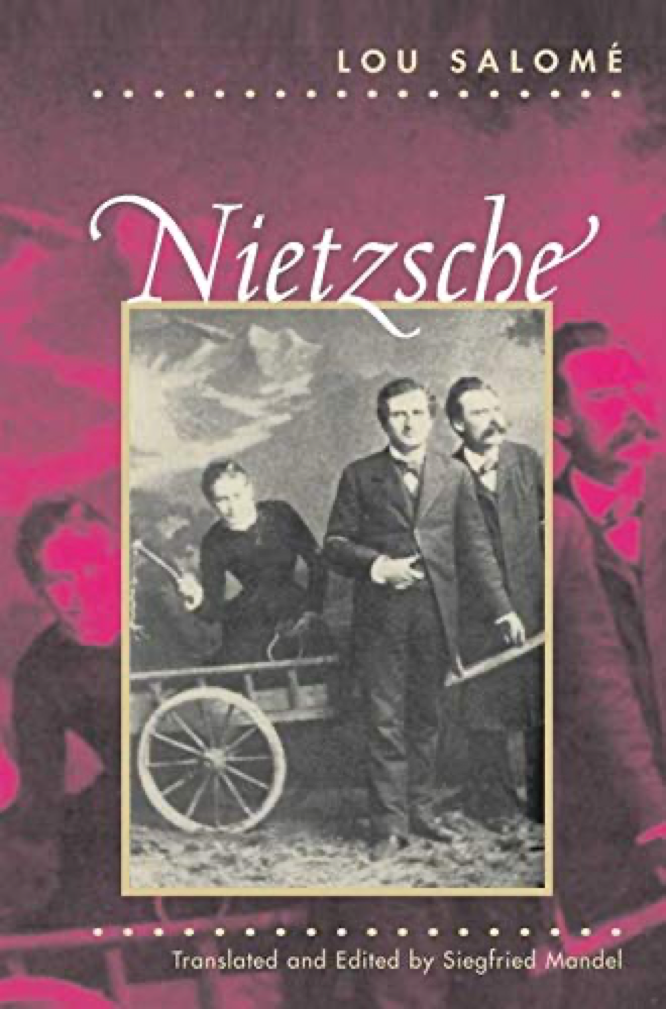 This book is principally a 1988 translation of Lou Salome’s Friedrich Nietzsche in seinen Werken (“Friedrich Nietzsche in His Works,” 1894). The original text is one of the earliest pieces of scholarship on Nietzsche, but is curiously hybridized with elements of memoir, since Salome was a personal student of Nietzsche’s during his late “formerly professor, and now a wandering fugitive” phase of work. This circumstance, amplified by Nietzsche’s affection for her (he proposed a marriage which she declined) entitles her to a certain privileged perspective on the ideas of a thinker whose paradoxical core involved a vigorous interplay of the objective and the idiosyncratic. “Unforgettable for me are those hours in which he first confided to me his secret, whose inevitable fulfillment and validation he anticipated with shudders.” (130)

Salome identifies “the conflict between the need for God and the compulsive need to deny God” as the cornerstone of Nietzsche’s struggle, which made him into a “sacrificial animal,” the remains of which were then “a dual figure–half-sick and suffering; half-saved, a laughing and superior human.” (89) In all of this, however, she surprisingly takes him to have missed his destiny rather than realized it. Writing of the break with Wagner and Nietzsche’s academic resignation, she remarks, “One cannot escape the feeling that the greatness reserved for him passed him by.” (56)

Translator Siegfried Mandel provides a lengthy introduction, focused on a late-20th-century appreciation of Nietzsche’s biography, both prior to and during his association with Salome. In particular, Mandel takes some pains to arrive at conclusions about Nietzsche’s sexual identity and experiences. Mandel also repudiates the allegations that Nietzsche was syphilitic, and works to dissociate the actual man from the rumors that helped to inspire Thomas Mann’s Doktor Faustus. (xli)

The translation leaves out many of Salome’s original annotations, a considerable portion of which consisted solely of extensive quotes from Nietzsche’s published works. But Mandel also reinserts [in brackets] some omitted language in correspondence reproduced within Salome’s text. Mandel’s own endnotes are largely explanatory, and imply that he is addressing himself to a readership with little prior familiarity with Nietzsche. Indeed, as a basic introduction to Nietzsche’s thought, the book is serviceable, although its peculiar perspective and unique judgments also give it great interest to those who have already studied Nietzsche at length.