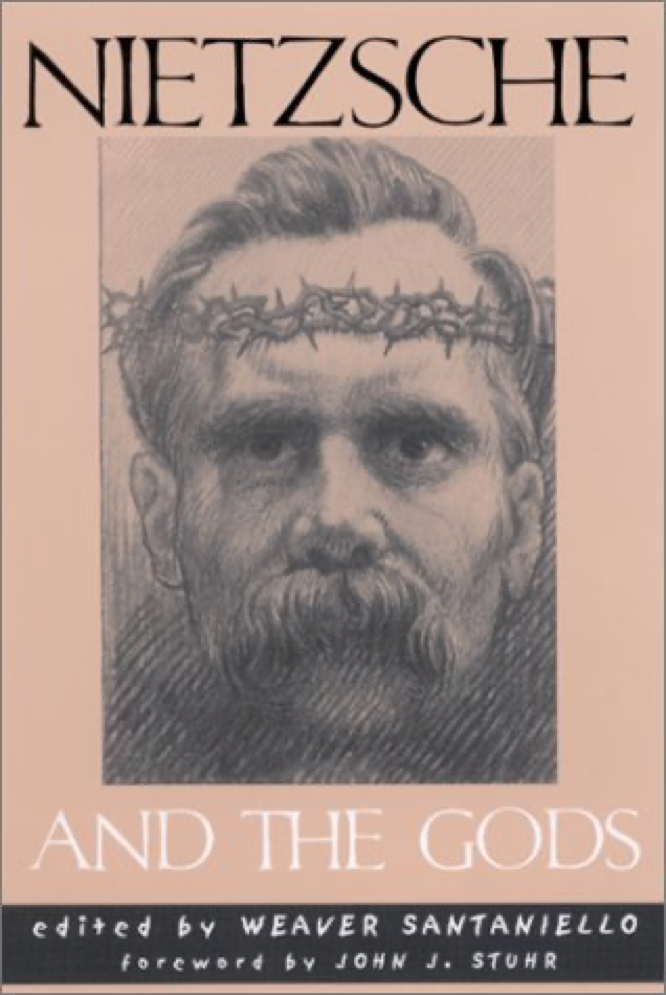 Nietzsche and the Gods is a pleasantly diverse assortment of eleven papers on religious themes in Nietzsche’s writing. Editor Santaniello has divided the papers according to religious tradition: Judaism, Hellenic paganism, Buddhism, Christianity, and Islam. Although all of these pieces are informed by considerable scholarship, some of them are rather dispassionate analyses, and others are out-and-out sermons for which Nietzsche is the exemplum (positive or negative), while most fall somewhere in between. All but three of the papers (the ones by Sallis, Parkes, and Tillich) are original with this volume.

The two papers in the Judaism section are quite different from one another. Tim Murphy offers an thorough and accessible examination of Nietzsche’s evaluations of Judaism. But the Wyschogrod and Hood paper examining Nietzsche’s influence on the mature work of Martin Buber is extremely recondite, to the point where I wondered if they weren’t “playing” the reader with their post-modern theological erudition.

Unsurprisingly, about half of the section on “The Greek Gods” is given over to discussion of The Birth of Tragedy. It is the primary object of study in John Sallis’ “Shining Apollo,” as well as half of the issue in Lawrence Hatab’s analysis of “Nietzschean Expressions of the Sacred.” But I found more value in Weaver Santaniello’s own “Socrates as the Ugliest Murderer of God,” one of the shortest papers in the collection.

Both of the papers in the Buddhism section emphasize congruities between Nietzsche’s views and the scholars’ understandings of actual Buddhism, as distinguished from Nietzsche’s largely Schopenhauer-based ideas about Buddhism. From a Thelemic perspective, I was especially interested in the weight placed on horticultural metaphor in both Nietzsche’s writing and the Buddhist sources referenced by Robert Morrison. Graham Parkes’ comparative discussion is oriented to overcome not only Nietzsche’s misunderstandings of Buddhism, but also American preconceptions about Zen–which Parkes faults for being informed by the Soto tradition to the exclusion of the more Nietzschean Rinzai strain.

The most generally useful of the papers in the Christianity section is Thomas Brobjer’s study of Nietzsche’s evolving relationship with Christianity prior to his final overtly anti-Christian phase. Brobjer carefully combs published and unpublished writings, while deflecting Nietzsche’s later anti-Christian reconstructions of his earlier motives. I was rather disappointed in Jerry Clegg’s paper regarding “Nietzsche on Pistis versus Gnosis“; I found its wholesale collapse of Will to Power and Will to Truth into the respective terms of the pistis-gnosis dialectic to be insufficiently substantiated. Paul Tillich’s “Escape from God” was surprisingly palatable to me. I’m not sold on the closeness of the kinship between Luther and Nietzsche offered by Tillich, but his readings of Nietzsche are fair, and his evident aim in this piece is to use Nietzsche’s thoughts in the tempering and refinement of an existentialist theology over and against the “sin of religion.”

There is only one paper in the final section on Islam, and I was fairly nonplussed by this piece on “The Consequences of Atheism” by pious Sufi Henry Bayman. While acknowledging Nietzsche’s genius, Bayman chiefly construes him as a culprit in what he sees as the apocalyptically disastrous faithlessness of modernity, as well as a Faustian demonstration of the atheist’s comeuppance.

Overall, I found this book to offer a great amount of material for reflection, both in connection with the study of Nietzsche’s work, and in the general philosophy of the religious traditions at issue. The impressive variety of the contents should assure readers with corresponding interests that at least a couple of pieces will amount to highly informative reads.