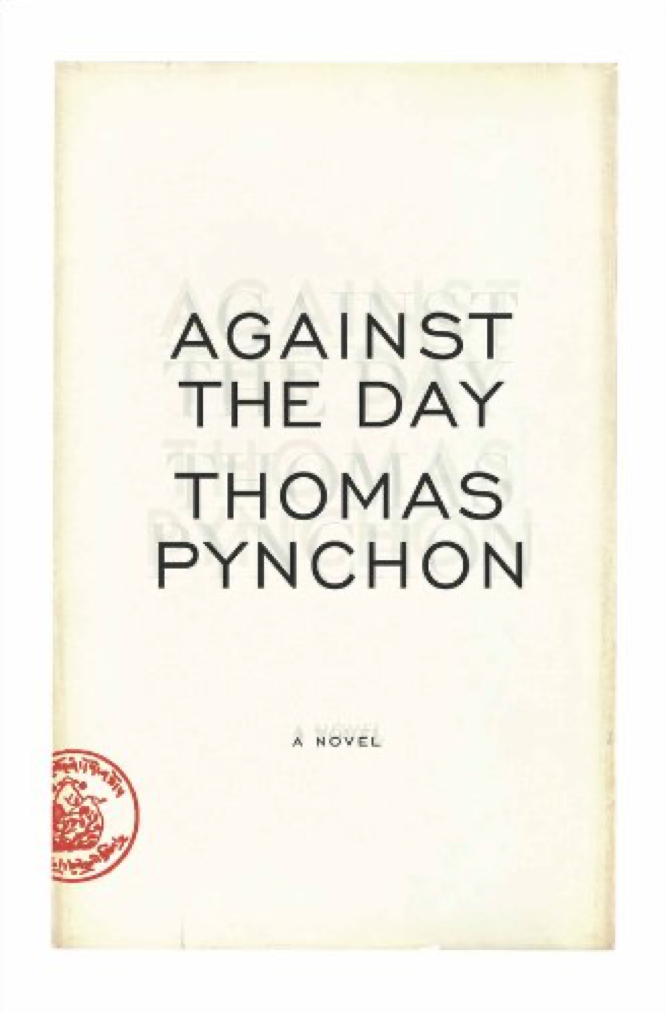 On finishing my read of Against the Day, I believe I have read all of Thomas Pynchon’s published fiction–all his books, anyway: the novels and the Slow Learner collection. This one took two attempts: I halted the first circa 2007 at the midpoint of the novel, and I returned to read the whole thing this year. Straddling the 19th and 20th centuries, I think it is Pynchon’s longest book. It descends from a rarified world of “boys’ adventure” in airships, through anarchist struggle, family revenge, state espionage, sexual compulsion, academic intrigue, and mystical conspiracy, to meditations on light, number, and time.

It is strange that my first attempt at this book was while I was living in Chicago, and my second has been in Colorado. It begins in Chicago at the World’s Columbian Exposition of 1893, and several characters travel from Chicago to Colorado–while Colorado is also the disseminating point for the Traverse family, whose various members trace many of the book’s persistent plot threads. Ultimately, the geography of the book is all-encompassing, featuring London, Venice, Vienna, Mexico, Shambahla, and the Hollow Earth, among other locations. It includes a typically Pynchonian cast of thousands, with names like Ruperta Chirpingdon-Groin and Bevis Moistleigh.

The title phrase appears several times in the text, each with a different contextually-driven meaning. In addition to these, I understood it to be an Englishing of contre jour: the technique of giving focus to a backlit subject in photography and painting. This notion relates to inventor-character Merle Rideout’s photographic career with its through-line intersecting both the early and late parts of the novel, and to the physics of light that is centered in many different passages, as well as the sense of opaque futurity in the lead up to the Great War and the subsequent totalitarianisms of the 20th century.

As always, Pynchon is very funny, littering the book with jokes to take the edge off of a palpable anger. Among the many digressive episodes, some exalt genre conventions from less “literary” species of fiction, such as the terrific weird horror passage recounted by the explorer Fleetwood Vibe (138-148). Sex is frequent enough in the early parts of the book, and somewhat surprisingly seems to increase in the later ones. Altered states of consciousness and metaphysical indeterminacy create ambiguities and introduce unreliability into the third-person omniscient narration.

Some quick notes regarding my “completed” and iterative consumption of Pynchon’s works (in no particular order): Having read Inherent Vice I saw the movie during its initial release, and I think Gravity’s Rainbow needs to inspire a grand piece of musical theater. V is at the top of my list of Pynchon to re-read. I have now read Mason & Dixon twice and Against the Day one-and-a-half times–they were each worth it.