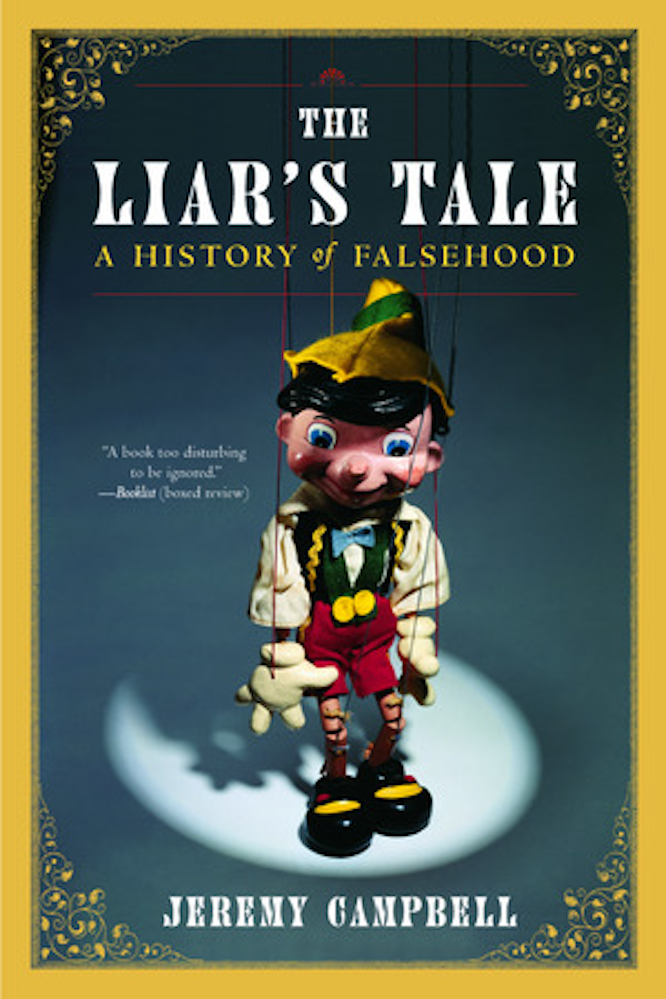 Jeremy Campbell is a high-end journalist, and his Liar’s Tale is an excitingly scarce commodity: a popularizing history of epistemology! He organizes the narrative around the changing valuation of falsehood, necessarily describing in the process the corresponding shifts in the idea of truth. The treatment is very wide ranging, exploring such fields as evolutionary biology and aesthetics as they come into contact with the central topic. But most of the discussion is given over to the vertebral canon of Western philosophy.

I did enjoy the book, although I think I differ with the author with respect to our positions and allegiances. My first warning was on page 72, where the author mentions in passing that Socrates “shuns relativism, the doctrine that tends to favor brute force.” Huh? That’s a pretty substantial conclusion to pack into a subordinate clause without any further support or explanation. I took note again when he quoted Alan Bullock to define Surrealism as a “cult” that developed “a scorn not only for reason but for humanity.” (266)

In his final chapter, Campbell cashes in the various chips he has accumulated in an otherwise even-handed account, in order to vilify the post-structuralists, deconstructionists and post-modernists of the intellectual left, as well as quantum theorists and other theoretical physicists; whom he sets in opposition to the virtue of “common sense.” Unsurprisingly, he makes much of the Sokal hoax, and he also quotes approvingly from rightist pundit Shelby Steele. Campbell–writing at the end of the 1990s–predictably lumps in Bill Clinton as a signal liar. Campbell says it is “common sense” that illicit blow-jobs disqualify political leaders, and the sustained public support for Clinton in the face of his impeachment was therefore a function of a popular appetite for lies. I wish that I could feel confident that Campbell would come out later even more strongly against the derision of the “reality-based community” expressed by a Bush aide (Karl Rove?) to Ron Suskind in 2004: “We’re an empire now, and when we act, we create our own reality. And while you’re studying that reality—judiciously, as you will—we’ll act again, creating other new realities, which you can study too, and that’s how things will sort out.” Suskind’s source demonstrates that a doctrine of creative mendacity has at least as much resonance among the anti-intellectual right as it does among the intellectual left, and the real-world impact of the former is certainly more grievous: generating wars of aggression, fostering denial about global climate change, propagating economic malaise, and so forth.

Although I disagree with Campbell’s ideological perch, his high-altitude summary of philosophical history is still entertaining and largely accurate, and it would be a helpful orientation for someone with a beginning interest in the field of theories of knowledge and meaning. Still, the reader should not be taken in by the easygoing journalistic style, but should rather subject this book to the level of suspicion that its topic rightfully evokes.