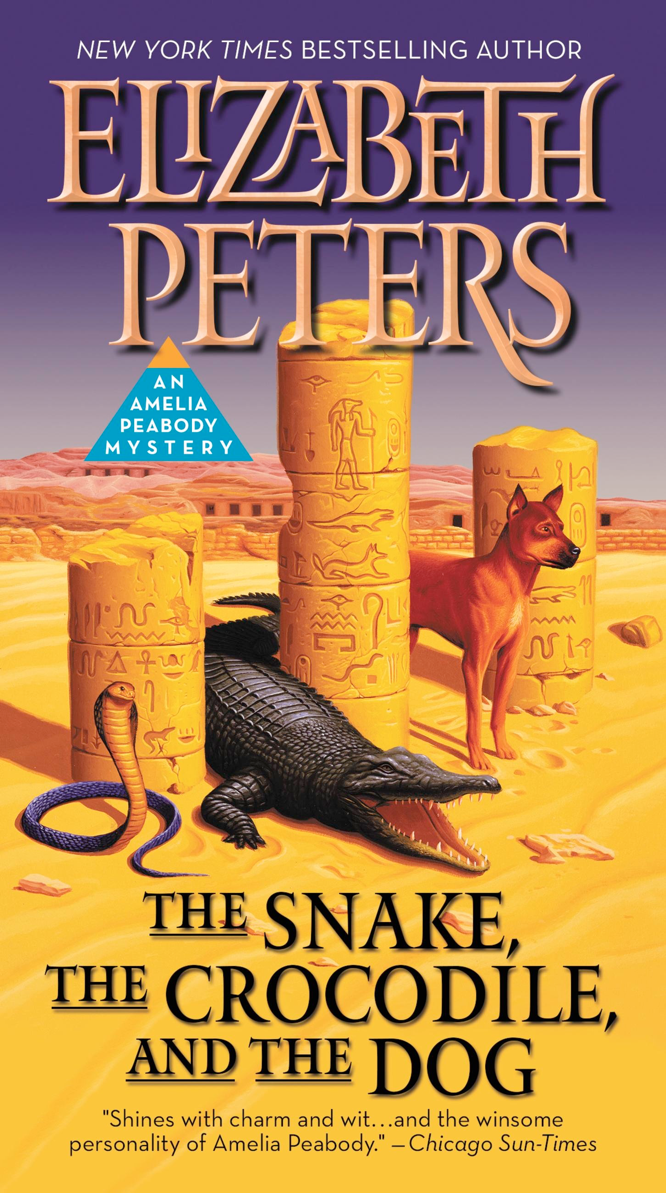 This seventh volume of the adventures of Victorian Egyptologist Amelia Peabody Emerson is very much a serial installment. It is hard to imagine enjoying it much without having read several of the earlier books, especially The Crocodile on the Sandbank, Lion in the Valley, and The Last Camel Died at Noon. In fact, this text frequently deploys the advertising footnote: dropping the title of a previous novel into the bottom margin of the page in order to explicate an allusion to earlier adventures. The feature reminds me of nothing so much as 1960s and 70s Marvel comic books, with the continuity cross-references jammed into the corners of panels. The Snake, the Crocodile, and the Dog also continues author Peters’ metafictional jockeying of material from H. Rider Haggard. This time, she introduces Leo Vincey–a character whose name is lifted from the protagonist of Haggard’s She.

The occasional line drawings introduced in The Last Camel Died at Noon do not persist in The Snake, but there are still several maps to help the reader understand the path of the expedition. The maps are clear, but it’s hard to refer to them, because they are inserted individually in the course of the text, and there is no table or index to note their locations. On a related issue, the “Editor’s Note” at the beginning refers quite inaccurately to a glossary appendix on “page 339,” evidently failing to account for the revised pagination of the paperback edition I read.

I was a little worried by the addition of yet another dependent to the Emerson household at the end of the previous book, and I wondered how an exciting pace could be maintained in the face of such elaborate parental concerns. Peters thankfully managed to have the Emersons leave the children in England for the 1898 archaeological expedition to Egypt in The Snake, and the occasional letters from young Ramses provide excellent comic relief, as well as a clever supplementary plot-line. The relief is necessary, in my view, because of the circumstance of Radcliffe Emerson’s traumatic amnesia, which gives this story more tension and sadness than were typical of the earlier volumes. The resolution of the plot involves multiple “reveals,” the later of which certainly caught me off-guard. But there’s also an intimation of a significant plot point undetected by the narrating sleuth Amelia herself. I’m sure it will be fulfilled in later stories.