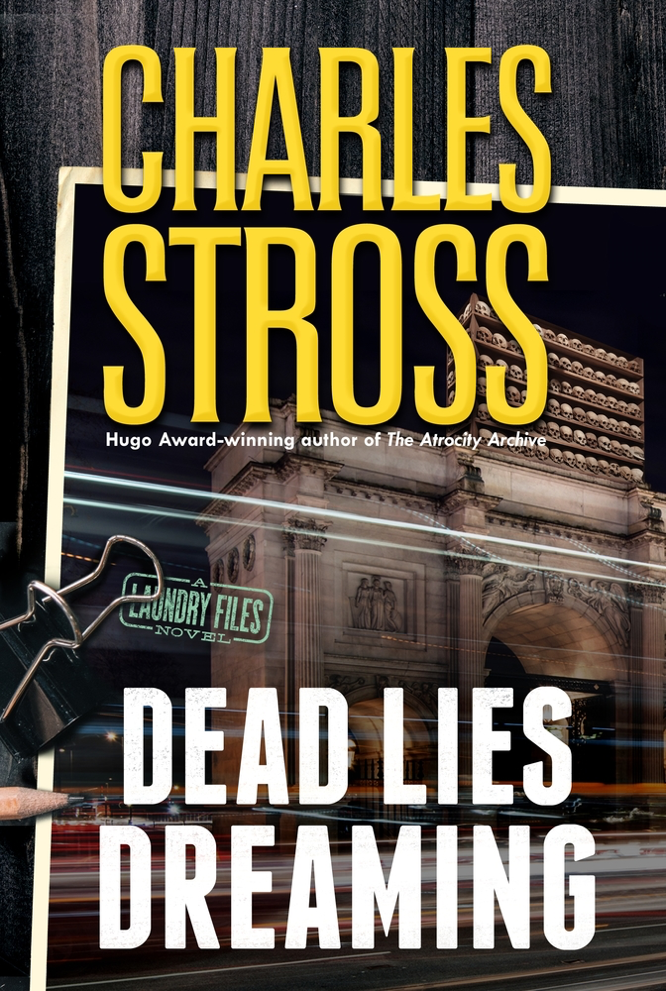 The title should tip off readers of the earlier Laundry Files books by Charles Stross that this newest installment is something different. Unlike the nine volumes to precede it, Dead Lies Dreaming does not seem to be named after a document. [ . . . . . . . . . Spoiler (Hover over to see) . . . . . . . . . . ] The story transpires in just the setting established in the last couple of Laundry novels The Delirium Brief and The Labyrinth Index. This twenty-first-century England ruled by the New Management (i.e. the Black Pharaoh and his minions) is only a little different from our “real” world. They have sorcery and superpowers while we have novel coronavirus, but the economics and politics of the thing look familiar enough. Given the theories of time travel and onieromancy set forth in the book, the Laundry universe may simply be a dream of ours, or ours a dream of theirs.

Dead Lies Dreaming is not narrated by a character identified with the UK occult intelligence bureau the Laundry; in fact, Stross drops the first-person approach altogether, in favor of a conventional third-person omniscient voice. This choice allows him to jump around among several principal focus characters, and readers might be forgiven for wondering which if any of them is the protagonist. He picks up and develops a couple of themes that he had first established in The Annihilation Score. The philosophy of public policing is a concern for the ex-cop and newly-minted magical “thief taker” Wendy Deere. And the emergence of vernacular superpowers is explored in the capers of Imp and his gang.

There are many allusions to the earlier Laundry series, of course, and to the ritual literature of H.P. Lovecraft, but also significantly to Peter Pan and to A Christmas Carol. Like previous Laundry books, this one was released on Hallowe’en, and the bulk of initial readers are thus digging into our copies during the winter holiday season. Stross cleverly capitalizes on this fact in the book’s opening sentences:

Imp froze as he rounded the corner onto Regent Street, and saw four elven warriors shackling a Santa to a stainless-steel cross outside Hamleys Toy Shop. “Now that’s not something you see every day,” Doc drawled shakily. His fake bravado didn’t fool anyone.

Readers of previous Laundry books will quickly understand the genuine plot points established here in what a novice reader might take for mere sadistic surrealism. The engagement of the later parts of the novel with Victoriana in “some eldritch continuum of crapsack dipshittery stalked by the ghosts of maniacal serial killers and adorable Dickensian street urchins” (321) solidifies the black cheer of Xmas in the shadow of CASE NIGHTMARE GREEN.

In my review of The Delirium Brief, I remarked, “I doubt that the Laundry’s world can survive more than two additional installments on the current trajectory.” Right on schedule, the series has pivoted from a diachronic advancement of Lovecraftian Armageddon to a more synchronic recounting of episodes and adventures in a given period of peak weird. I do miss the Laundry operatives, but I still enjoyed this “Tale of the New Management,” and I will continue to follow the series.