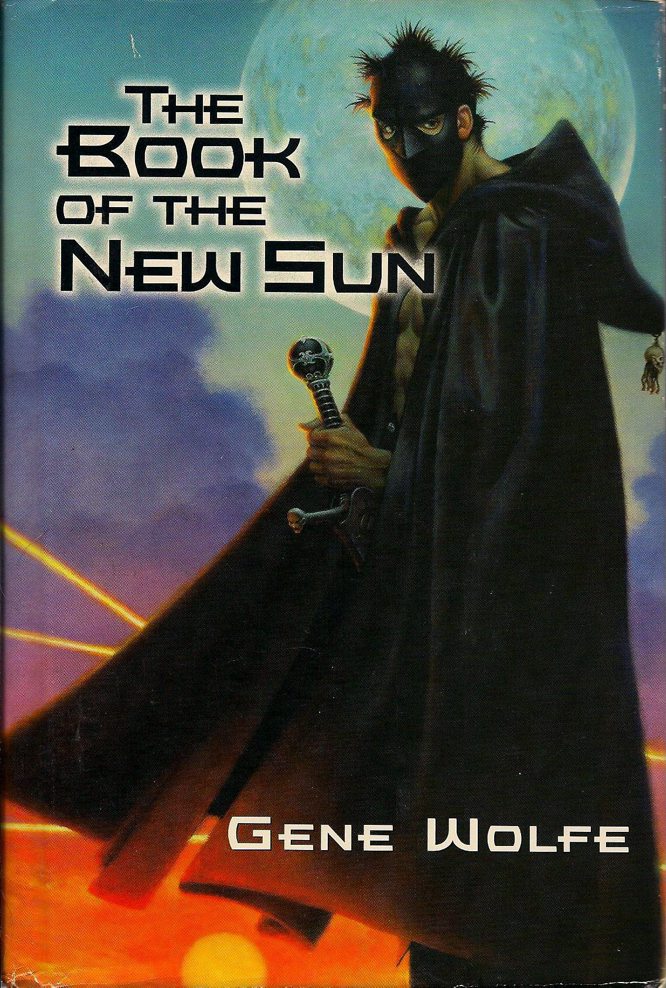 I first read this book (in the four individual volumes) many decades ago in my early teens. In 2007, I picked up this omnibus edition with the intention to re-read it, and quickly acquired most of the other volumes in the larger Solar Cycle, which resulted in a large prospective reading project on which I procrastinated until the thick of the 2020 coronavirus pandemic. Given my intention to re-read it, I had had a favorable impression of it on my initial read, but I really felt I had not fully understood or appreciated it then. I was correct.

In fact, I am such a different reader now, and so much more capable of grasping what Wolfe has presented here, that most of this book seemed entirely new to me. I remembered the largest plot arc, by which the apprentice torturer ascends to the office of Autarch–and it’s no spoiler to say so, since that framing is well established early on–but I had forgotten the smaller twists, if I ever really appreciated them, and many of the features of the setting seemed entirely new to me on this read.

There is a great contrast in the two literary backgrounds that informed each of my reads. On my initial approach, I came to the work with what I thought was the compatible experience of The Lord of the Rings and perhaps Michael Moorcock’s Elric saga. I did appreciate that the described Urth was in our far future, and I had already encountered this sort of conceit in The Sword of Shannara, a highly conventional epic fantasy with various clues to indicate that it was set in a future after our civilization had been effaced by catastrophic warfare. To be fair to my younger self, I think this approach to Wolfe’s books was perfectly in keeping with the publisher’s packaging and expectations, and to some degree I had simply fallen for the author’s intentional misdirection.

On this recent read, I was far more informed by the reading experiences I had gathered from other works in the “dying Earth” subgenre, especially the Viriconium stories of M. John Harrison and The City and the Stars of Arthur C. Clarke. And I was further prepared by reading Wolfe’s own Fifth Head of Cerberus, which offers the sort of elliptical presentation that occurs throughout The Book of the New Sun, without the “epic” framing or red-herring fantasy tropes of the latter.

Wolfe personally adhered to the Roman Catholic confession, and critics have sometimes highlighted this fact as if it supplied a privileged interpretive viewpoint for the work. I remember being a little put off by the possible significance of “religious” elements in my first read–having been burned by the Sunday School allegory of Narnia and the rather dim messianism of Donaldson’s Thomas Covenant books. But on this recent read, I thought the better comparandum would be the religions, cults, and mysticism of Herbert’s Dune, using the grist of historical religion in the mill of speculative worldbuilding–with some genuine metaphysical rumination. For what it’s worth, Wolfe’s Severian is a lot more diffident about the miracles of his story than Paul Atreides was. The “Claw of the Conciliator” relic that supplies the title of the second book is present through all four, and its demystification in the fourth has the paradoxical effect of enhancing its numinosity. The “One Ring” it is not.

The diction of this work is notable for its baroque qualities, archaicisms, and neologisms in an archaic manner. There is a rationale for these stylistic features, which are nevertheless alienating for the reader. Also alienating is the unsympathetic protagonist, who narrates the entire story on the basis of his professedly impeccable memory. A reader might (and I’m sure I once did) miss key details while simply trying to avoid getting stuck on these matters. Wolfe deliberately uses ambiguous language in his nautical and astronautical references. Spacefarers are simply “sailors.”

There are wonderful uses of form and metafictional structure. I especially enjoyed the central play-within-the-play of “Eschatology and Genesis” in the second book, and the Canterbury Tales concatenation of stories told by the convalescing soldiers in the lazaret of the fourth. Despite appearances, these are not digressions from the main work, and they can be understood in part as instruction in how to read the larger text. There is a very rigorous pattern governing the whole, with a strong sense of cyclic completion. The “Citadel of the Autarch” in the title of the fourth book is the place where the first book begins, but its identification with the Autarch is the result of the events of the tale.

Reading The Book of the New Sun is not like watching a Hollywood movie or even reading a mystery novel. If you let it carry you along, you will be left wondering why you bothered. But there are amazing rewards for the reader who is alert to the increasingly distant voice of the narrator and who works to recognize the features of the story that are left tacit. Not only do I hold this work in high regard for its own sake as a literary accomplishment, it has taught me about reading and storytelling.