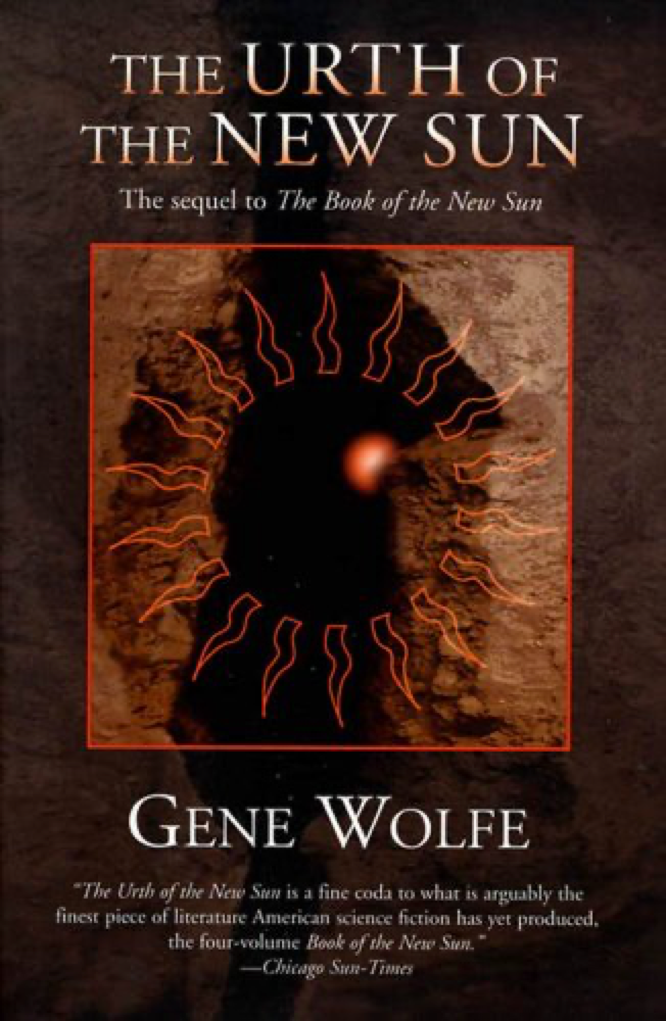 I bought this book in the twentieth century of the vulgar era, and moved it with my library about eleven times over the succeeding twenty-two years before I finally read it. Somehow that seems fitting. The Urth of the New Sun is the fifth of four volumes in Wolfe’s autotheography of Severian the Torturer, a.k.a. Severian the Great, a.k.a. Severian the Lame, Autarch of the Commonwealth, Epitome of Urth, and incarnation of the New Sun. It first recounts his voyage to and from the neighboring universe of Yesod. (Qabalistic Hebrew is strangely conscripted throughout the book.) Then it details his salvific manifestations on Urth and its successor world Ushas.

There are roughly as many plot arcs and riddling enigmas in this book as in the four previous ones put together, and there is hardly a person or a place in the earlier stories that is not subjected to some sort of revisitation in the sequel. These seem to assume their “proper” dimensions so that it is difficult to believe that the author did not secretly understand them this way from the beginning. There is less here than in the earlier books in the way of nested narrative and storytelling set-pieces; for a book chock-full of the vagaries of time travel and transcendence of space, the tale is surprisingly linear, keeping to Severian’s subjective experience of events.

I did not find this volume as difficult of access as I had its predecessors when I first read them in the 1980s. But there were still bits of it that resisted my full understanding, including the unspecified “plausible speculation” with which Wolfe teases his readers in the afterword on “The Miracle of Apu-Punchau.” I expect that a re-read would yield perceptions that were withheld from me on this pass. But my aim is first to proceed on through the seven further volumes of the Solar Cycle.