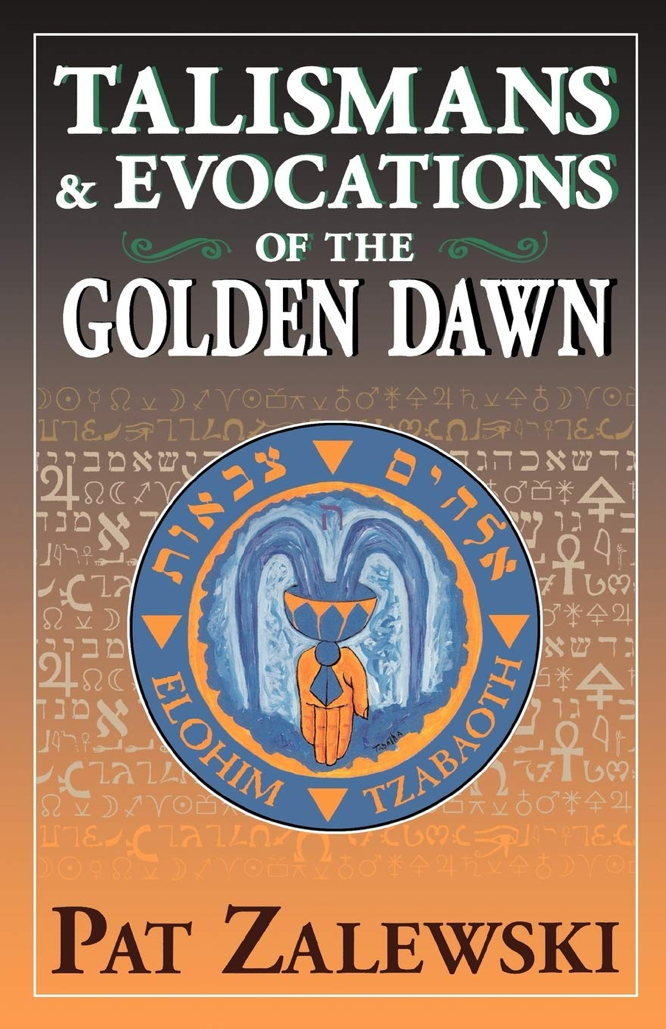 Talismans and Evocations marks Pat Zalewski’s return to commercial publishing. This latest work, just one of several planned with Thoth Publications, like many of his previous books is a unique contribution to the corpus of Golden Dawn related literature already available today. The book is divided into two sections. The first and longer section discusses the art of evocation. The second much shorter section deals with the creation and consecration of talismans.

There have been no previous publications about the Golden Dawn’s teachings concerning evocation, making Talismans and Evocations unique in subject matter. This initial section is divided into five chapters dealing with history, the “Z documents” of the Golden Dawn’s inner order, the seven rays of Theosophy, angelic hierarchies, astrology and application and tools. Section two, Talismans, consists of a single chapter. However, this chapter discusses topics ranging from talismatic or magical images to magic squares called kameas to the creations and use of sigils. The first section begins with a ritual of evocation written and performed by several of the more famous members of the Golden Dawn, including Florence Farr and Alan Bennett. The second section ends with a ritual of talisman consecration written by Alan Bennett.

As usual Mr. Zalewski’s writing brings something new to the field of Golden Dawn magic and is thus a valuable resource for any student of the Golden Dawn. The real value in this book is that it is not just a “how to do magic” book. Instead Talismans and Evocations provides the reader with all of the tools necessary for them to figure out how to write their own rituals. It should be noted, however, that this is not a book for beginners. Proper use of the information contained in its pages depends greatly upon the experience and knowledge of the reader, such as a thorough understanding of the Golden Dawn’s inner order’s (the RR et AC) Z formula and the basic principle of occultism as espoused by the RR et AC.

Mr. Zalewski offers a great deal from the historic perspective as well. For the first time rituals and teachings written and used by members of the Golden Dawn are published along with copious amounts of notation by the author. This includes not only the previously mentioned rituals of evocation and talismanic consecration but also rituals for the consecration of the adept’s magical weapons that had not been seen before, coming from notebooks from the New Zealand branch of the Stella Matutina, one of the offshoots of the Golden Dawn after the 1904 schism.

As with any book there are a few errors and inconsistencies. These mostly have to do with editing; there are numerous typographical errors, missing words and a handful of repeated paragraphs. Others appear to stem from the book having been written over an extended period of time. For instance on a section concerning the ritual of the hexagram the notation states that the unicursal hexagram will be used in the diagram and explanations as it is much easier to use than the traditional hexagram. A few pages later, however, one finds the diagrams of the traditional hexagrams as well as the so-called hexagrams of Saturn, which should have also been omitted.

Pat Zalewski’s Talismans and Evocations of the Golden Dawn is a valuable resource in the genre of Golden Dawn magic. For the first time anywhere the Golden Dawn’s teachings on the practice of evocation and the creation of talismans are published in a single volume. Despite typographical errors and the occasional internal inconsistency Talismans and Evocations is highly readable and informative. This book would be an excellent addition to the library of either the student of occult history or the practicing magician.