Vincent Bridges reviews Lioness of the Sun [Amazon, Abebooks] by Lorraine Tartasky and The Path of the Priestess: A Guidebook for Awakening the Divine Feminine [Bookshop, Amazon, Abebooks] by Sharron Rose in Journal of the Western Mystery Tradition, Vol 1, No 5. 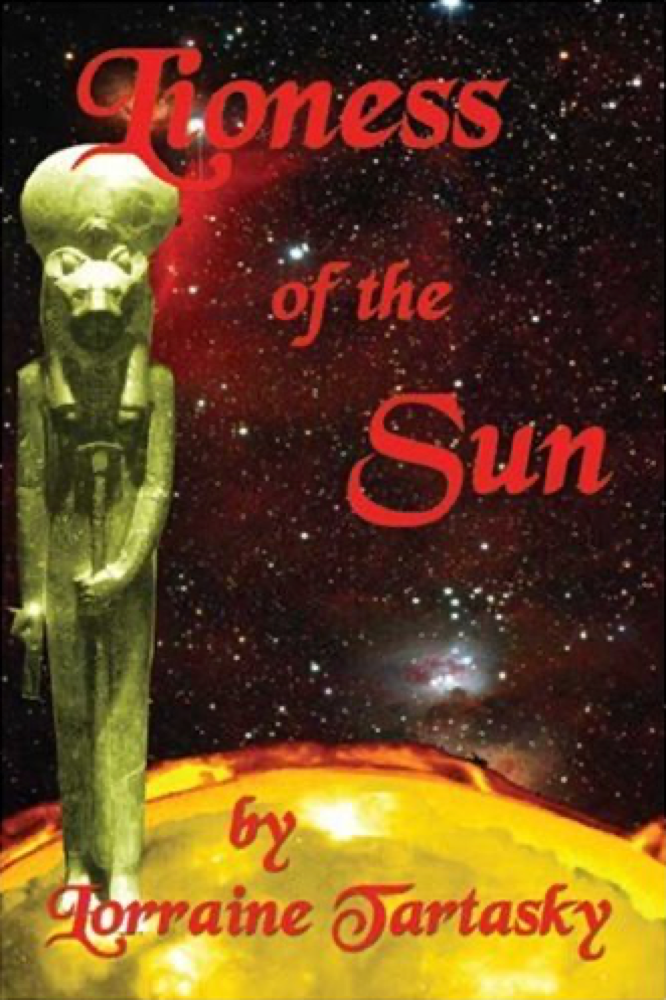 Last year, two excellent books were published that address in very different ways the same subject: the role of the feminine in ceremonial magick. The first, Lioness of the Sun, by Lorraine Tartasky, is a novel approach to the ancient traditions of Egypt, while the second, Path of the Priestess, by Sharron Rose, presents a modern, memoir-driven how-to book on what it takes to really follow the path of a priestess. When read together, a curious sense of continuity can be felt; the past is not so far away after all, and some human aspirations and practices have changed very little indeed.

Lioness of the Sun opens with a powerful depiction of the experience of shape-shifting into a lioness, as it introduces the book’s main characters, the Goddess Sekhmet and Her High Priestess. It moves smoothly into the romance at the heart of the book, that of two shipwrecked lovers from ancient Crete, Marissa and Arion. Marissa is fated to become the High Priestess of Sekhmet, with results that affect the course of Egyptian history. Woven into this tale are some amazing insights into the nature of magick in the Egyptian worldview.

“In order to experience and communicate with forces beyond human comprehension, the mind creates a symbolic landscape filled with personalities representing inconceivable energies. The consciousness may call upon these energies to manifest within charged symbols and there find a continuum in which to construct limitless, eternal powers.”

That’s about as close as I’ve ever seen anyone get to a definition of “magick.” The Golden Dawn’s Neophyte ritual supplies the same basic key – “By Names and Images are all Powers awakened and re-awakened” – but this elegant saying misses some of the directness of Ms. Tartasky’s definition. Within the context of ancient Egypt, Ms. Tartasky’s version has the added bonus of the rest of the novel in which to see this theme develop.

Lioness of the Sun is a romance about magick itself, the intoxication that comes from direct contact with the Egyptian Netjers. The novel follows Marissa and Arion as they find their destiny, and eventually each other once again, in the intrigues and power politics of the court of the female Pharaoh Hatshepsut. While the story is certainly compelling enough to keep the reader interested, I found myself thumbing ahead, looking for nuggets of magick. Chapter sixteen, Marissa’s initiation into the mysteries, is simply superb.

But it is chapter twenty-six that supplies, in a simple novelistic form, one of the great magickal truths. The Goddess Sekhmet is disturbed that Hatshepsut’s plans for a dynasty has failed, and blames the Goddess Shait, who is the expression of Ma’at, or harmony, as fate. As they argue, Shait reminds Sekhmet of a most basic truth:

“The Lioness began, the Scarab proceeded, then the Twins, followed by the Bull. Each has had its defining characteristics, which are above and beyond the control of the Gods and men alike. We all exist within the parameters of a greater framework, and that is Ma’at, supreme of Destiny, which is I.”

The book ends with a sort of promise for the future:

“Sekhmet had seen into the future and with that sight came knowledge that although the cycles of the heavens would bring both desired and dreaded change, and that in time all but Aset (Isis) would be forgotten, there would come a day when Sekhmet, Eye of Re, Defender of Ma’at, Lioness of the Sun would be remembered.”

If we consider the zodiacal ages listed above, then we are now, at the cusp of Aquarius/Pisces, one half a Great Year, roughly 13,000 solar years, from the Time of Sekhmet when Ma’at was supreme. Could this be the moment when Sekhmet is suddenly remembered?

Well, according to our second book, The Path of the Priestess, that’s exactly what’s happening. 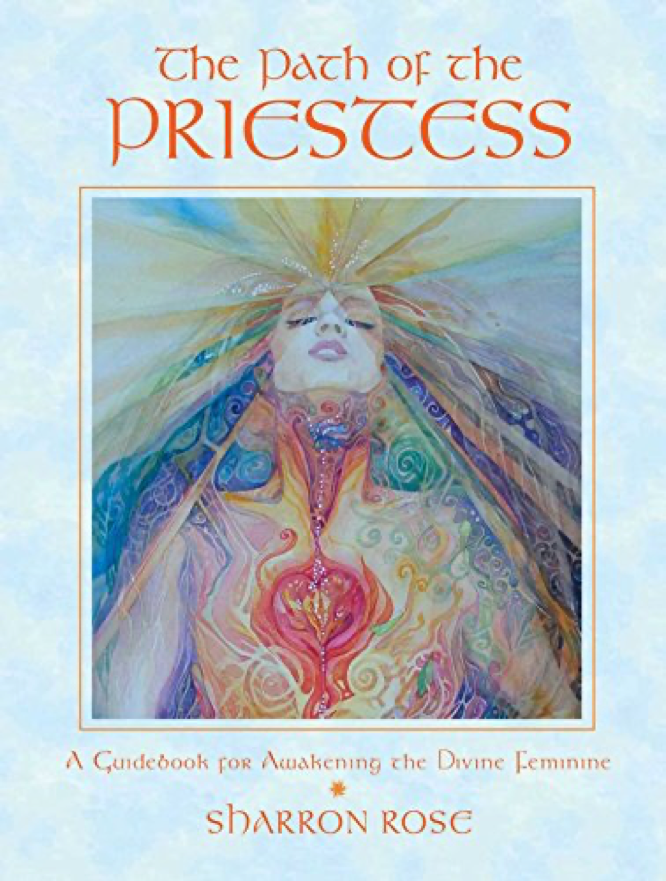 Part One of The Path of the Priestess is subtitled: “A Modern-day Odyssey to Discover the Mysteries of the Goddess and Her Sacred Realms of Light.” Sharron Rose takes us from her middle-class Jewish upbringing, through the radical changes of the 1960s, the world of theatre and dance in New York City, the psychedelics seventies and on to where the story truly begins as she lands in India to study classical Hindu dance. This leads her, in time, to Tantra, Tibetan Dzogchen and eventually to the Goddess Sekhmet.

As a magickal current, the reappearance of the Goddess Sekhmet is mainly the work of Dr. Robert Masters. In the late 1960s, Dr. Masters experienced a series of encounter with the Goddess, as described in chapter three of Ms. Rose’s book, and in his book The Goddess Sekhmet. At that point he was working with his wife Dr. Jean Houston, on several groundbreaking books, such as Mind Games, mentioned by John Lennon in his song of the same name, and Varieties of Psychedelic Experiences. The encounter with the Goddess deepened his appreciation of how altered states of consciousness can be used to gain valuable insight and information.

Although Ms. Rose’s encounter with Dr. Masters occurred much later, in the early 1990s, it was fortuitous, apparently, for both. It came at the peak of Ms. Rose’s personal quest for understanding, and seems to have given her the validation necessary to move out on her own as a teacher. The information on Sekhmet is powerful, including an interesting rendition of the nature of psychic reality from the Egyptian viewpoint that, while there are differences, adds to our understanding of the same subject given in Lioness of the Sun.

After the section with Dr. Masters, The Path of Priestess moves back toward the western tradition with a chapter on alchemy, Black Madonnas and the Cathars, mixed in with accounts of Ms. Rose’s dance work as Isis. Part one closes with a chapter on the Great Ages that the Goddess Shait might recognize and agree with. This helps put the personal information into its proper perspective, and assists the reader in the shift to the second section.

“Awakening the Divine Feminine,” Part Two of The Path of the Priestess, is a most informative work on the subject of awakening and working with subtle energies. Ms. Rose first takes the modern idea of feminism to task, and then proceeds to teach the reader how to strike those poses of “Majesty,” and “Divine Pride” that might have been used by Hatshepsut to quiet the court at Wastet. Ceremonial magick as a form of divine feminine empowerment is something that strikes the almost exclusively male magickal community with a certain amount of nervousness. But a book like this one is long overdue.

The meditations in this section are superb, and the art is simple, direct and fluent, supplying a welcome break from the publicity pictures of Part One. The drawings of various feminine figures with chakra images superimposed that accompany each major meditation are an inspired addition that helps the reader grasp the feeling of each interior working.

These two books deserve to be on every magickal bookshelf, right next to Mary Greer’s Women of the Golden Dawn.