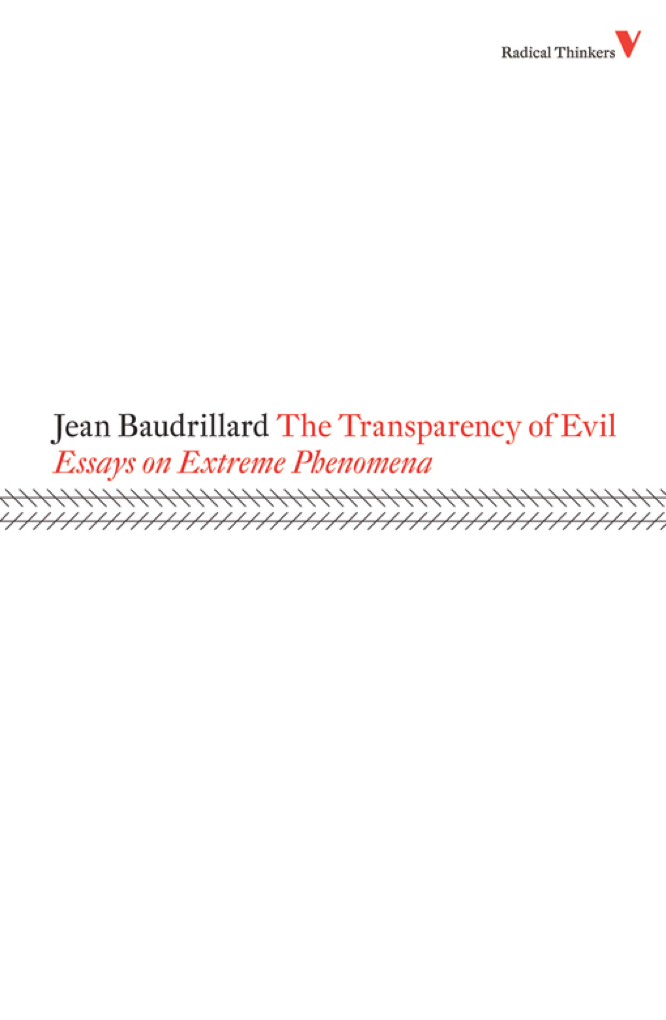 The Transparency of Evil was written in the late 1980s, and first published in French in 1990. But as I read it in 2020 it often felt up-to-the-minute. It was hard to believe that some of these observations were not rooted in the internet-mediated social environment of the 21st century.

“This society now produces only ill-defined events whose ultimate clarification is unlikely. In earlier times an event was something that happened–now it is something that is designed to happen. It occurs, therefore, as a virtual artifact, as a reflection of pre-existing media-defined forms” (41). “The new technologies, with their new machines, new images and interactive screens, do not alienate me. Rather, they form an integrated circuit with me. … We have left the hell of other people for the ecstasy of the same, the purgatory of otherness for the artificial paradises of identity” (58-9).

Moreover, Baudrillard’s frequent attention to epidemics and virality, composed in the 1980s under the cognizance of AIDs, sounds today with the amplifying echoes of novel coronavirus. His identification of terrorism as the paradigmatic form of the “transpolitical” was likewise both current and prescient.

In both the first and second parts of the book, Baudrillard references the work of the French ethnographer and critic Victor Segalen (1878–1919). While The Transparency of Evil is clearly informed by Baudrillard’s own signature concepts of simulation, hyperreality, and so forth, these are not called out explicitly, and there is no scholarly intertextual apparatus.

Much as I enjoyed the first part of the book, I got more out of the shorter second part titled “Radical Otherness.” In it, he returns to the theme of Evil that he raised late in the first part, and he coordinates this focus with a distinction between difference and otherness. Difference allows for, perhaps even demands, assimilation through the positing of a shared continuum, whereas otherness presents genuine discontinuity. Baudrillard identifies otherness with the foreign, and relates it to traditional concepts of hospitality. He proposes that ritual and seduction are counterstrategies by which the other can and will preserve itself in the face of coercive regimes of reconciliation.

“Whereas the Good presupposes a dialectical involvement of Evil, Evil is founded on itself alone, in pure incompatibility. Evil is thus master of the game, and it is the principle of Evil, the reign of eternal antagonism, that must eventually carry off the victory” (139). Is this optimism?