Hermetic Library Fellow T Polyphilus reviews Litany of the Long Sun [Bookshop, Amazon, Publisher] by Gene Wolfe, the first half of The Book of the Long Sun. 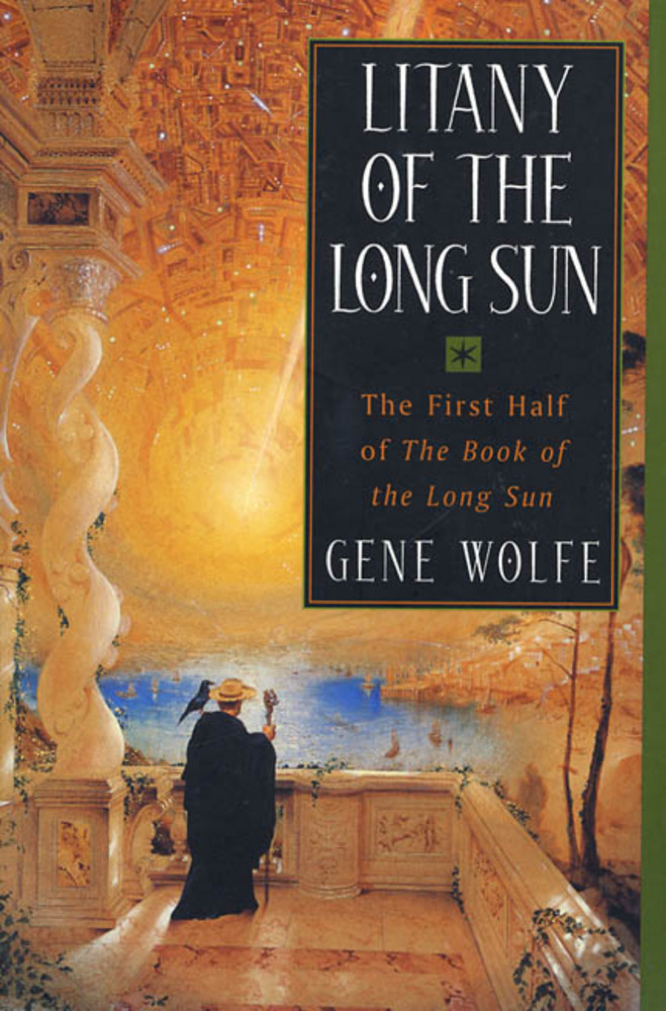 This volume containing Nightside the Long Sun and Lake of the Long Sun was my first reading in Gene Wolfe’s Solar Cycle beyond the Book of the New Sun (including its Urth). While I appreciate that this second series are supposedly set in a shared far-future continuity, there’s no intersection of plot, character, or setting with the five New Sun books.

There are quite a few points on which this Long Sun series differs from its predecessor. The chapters are longer and fewer in number, making for a different reading rhythm. It has a distinct central protagonist (and a more likable one, on the whole), but he is not the narrator. There is no concluding declaration for each book, to punctuate the story. In fact, it didn’t feel like much was resolved at the end of Nightside. So I thought, ok, I’ll look at the start of the next book and see if there’s a gap in the narrative, then I’ll give it a rest for a little before continuing. But–Lake of the Long Sun picks up without any pause for breath. So I ended up reading the first two chapters of the second book in the same sitting as the last one of the first book!

The protagonist Patera Silk’s dreams are important in the Long Sun, just as dreams were for Severian in Urth. Silk’s dreams are described more believably–the telling really communicates the distortions and uncertainty of dream logic, including ambiguity about the reality of events until waking is finally established. Silk is also, like Severian, a reasonably zealous product of a tutelary order. Instead of being a journeyman of the Guild of Torturers, Silk is an augur (priest) of the polytheistic religion of his city, serving in a neighborhood manteion (temple for animal sacrifice) with its attached school. Silk is sometimes called a “butcher,” since killing animals is central to his profession. So, despite the augur’s relative harmlessness Wolfe again raises for the reader the sort of conundrums he created with his torturer hero. He does a very effective job of making Silk into a conscientious, sympathetic character with “innocence” as his keynote.

Where the New Sun had the alzabo as a means to abrogate the conventional boundaries of personal consciousness, the Long Sun presents a number of instances of divine (and possibly diabolical) possession. The nature and ontological status of the gods is subjected to repeated questioning and re-evaluation by Silk and others over the course of the story, and at this midpoint–with two books of the Long Sun left to go–it doesn’t seem to have reached any sense of finality. But effects of divine initiative are certainly real, and they are not limited to theophanies in the “sacred windows,” which are quite evidently some sort of electronic display screens.

As in the New Sun books, the Long Sun presents a richly-imagined setting, working its way out from quotidian details to a much larger and stranger picture as the story proceeds. This setting has been subjected to spoilers in jacket copy and reviews, but I’d rather just say that it’s completely different than that of the other books. It is more fun to discover it through the book than it would be for me to try to reduce it to some of its larger features. One significant aspect that is introduced at the start is the fact that the city of Viron is a consciously mixed society of “bios” and “chems,” where the former are humans of biological descent, and the latter are engineered persons. There is a surprising level of community and reciprocity between these two sorts of people, and Wolfe often plays on the reader’s expectations in order to delay awareness that a given character is a chem.

On the whole, I find that these Long Sun books succeed in perpetuating and renewing many of the most interesting tropes and preoccupations of the New Sun series, while transposing them to an entirely new milieu. It’s an impressive feat, and I’m looking forward to reading the second half of the Long Sun series.