John Opsopaus reviews Ancient Philosophy, Mystery and Magic: Empedocles and the Pythagorean Tradition [Bookshop, Amazon, Publisher] by Peter Kingsley at The Roots of Philosophy in the Caduceus archive. 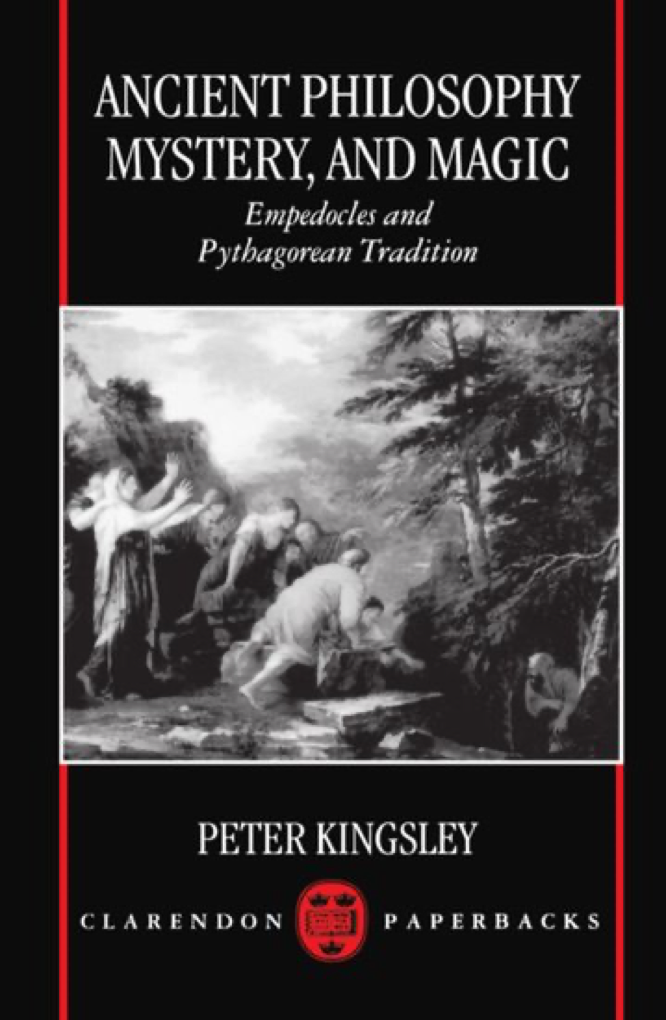 Peter Kingsley has written an important book that should be high on the reading list of anyone interested in the roots of magic, alchemy and the mysteries in Western civilization. It is Ancient Philosophy, Mystery and Magic: Empedocles and the Pythagorean Tradition.

Kingsley presents a wealth of evidence for a dense network of interrelationships among a number of ancient beliefs and practices, including Pythagoreanism, the Orphic and Dionysian Mysteries, alchemy, the Hermetica, the Greek Magical Papyri, Hecate magic, the Persian Magi, Sufism, Platonism, neo-Platonism and neo-Pythagoreanism. Described in this way, Kingsley’s account sounds like many other occult “histories,” which fabricate monolithic, hidden esoteric tradition. But there is a difference. Kingsley, until recently a Fellow at the Warburg Institute (where Yates also worked) is a true scholar, with both technical skill and good sense. It is through his exercise of the latter that Kingsley is able to see what has been missed (or ignored or repressed) by preceding generations of scholars. For Kingsley shows how these scholars have been blinded by their assumption that “real” philosophers and scientists could not have been interested in magic (and certainly would not have practiced it!). Especially they could not imagine that the heroes of Greek philosophy and science (such as Pythagoras, Empedocles and Plato), who were seen as founders of the rationalist tradition, could have any connection with “irrational” magic, alchemy or mystery-mongering. This bias has forced them into contorted interpretations of texts whose plain meaning they were unwilling to accept.

In the best tradition of scholarly writing, Kingsley documents all his sources, so interested readers can follow them up and form their own opinions. Reading his extensive footnotes is an education in itself, following them will keep you busy for months. (The reader will discover that reading Kingsley’s journal papers, published both earlier and later than the book, is especially rewarding.) Yet, for all his attention to detail, Kingsley is not pedantic. His text is very readable, and its snappy, almost breathless pace conveys the excitement of the exploration of a newly opened tomb, or of a mystery being solved (which is precisely what it is).

Many of the connections demonstrated by Kingsley have been intuitively apparent to many of us working in the esoteric traditions, but he documents them and also reveals other, less obvious connections. His book will also familiarize a wider readership with important, but neglected earlier studies that would otherwise remain buried in an immense scholarly literature, which is often hostile to esotericism of any kind.

Kingsley begins with an analysis of the four elements, which Empedocles introduced into western cosmology. Empedocles mentions four Gods corresponding to the elements:

but since ancient time there has been disagreement about which Gods corresponded to which elements. Kingsley argues persuasively that fire must be associated with Hades, which seems unlikely until he reveals the ubiquitous ancient tradition of a central fire, that is, a fire under the earth, which creates change in the elements above it. The result is a typical Jungian quaternity, with Hades and Persephone (Nestis) corresponding to fire and water, and Zeus and Hera corresponding with air (or, more accurately, aether) and earth. It has the ring of truth.

This brings us into the proximity of alchemical doctrines of the central fire (such as we find in the Aurea Catena Homeri), but also Underworld rites centered around the volcanoes of Sicily and Italy. Now we understand the legend that Empedocles ended his life by jumping into the crater of Etna, which in turn ejected a single bronze sandal. For volcanic craters were sites of underworld initiation and rebirth, and the single bronze sandal is a standard symbol of Hecate worship. (Empedocles himself tells us that he had escaped from the cycle of rebirth and was ending his last incarnation on earth.) Indeed, the crater (mixing bowl) is a familiar symbol in the Orphic literature, and volcanic regions dramatically demonstrate the union of fire and water central to alchemy.

The 24 chapters deal with the riddle posed by Empedocles and especially with the replacement of aether by air; volcanic cosmology; craters (in both senses); the Phaedo myth; the central fire; the Magi tradition; the transmission of these ideas from Sicily to Egypt; rebirth of Orphic, Dionysian and other underworld cults; Pythagoreanism and Neo-Pythagoreanism; the connections between magicians, “root-cutters,” and healers; the transmission of wisdom from master to disciple; and finally the influence of Empedocles, Hermeticism and alchemy on the Sufis. Three appendices address the close connections between the Gilgamesh epic and Parmenides’ poem, which describes an underworld journey; the parallels between Nergal (Erragal) and Heracles; and the influence of Empedocles’ ideas on the Isma’ilis.

I cannot recommend this book too highly; even if one doesn’t agree with all of Kingsley’s conclusions, it sets the terms for future investigations of ancient esotericism.