An irregular hodgepodge of links gathered together … Omnium Gatherum for March 3, 2021

Another new month, so welcome all Patrons to this Omnium Gatherum!

Until now, I’ve used this space to offer a little summary of some things since the last Omnium Gatherum, and since the previous month’s first post open to all Patrons. However, since I started doing weekly newsletters, I’ve talking about what’s happened each week over there. Instead of duplicating my weekly summaries, let me suggest that the new place for the summary I was doing in this first post can now be found there, for the most part!

Do consider heading over to the newsletter, and subscribing for those. You can check them out online before subscribing, of course, but I think they’ve turned out pretty good and each is full of information, updates, memes, and more! Also, the first month is a wrap now. I started them at the beginning of February, and just sent out the first one for March. Issue 6 went out this morning!

Mainly, Postal Exchange went out finally, now that the winter storm has passed and I could get to the post office without crampons and pitons, sled and team of sled dogs. 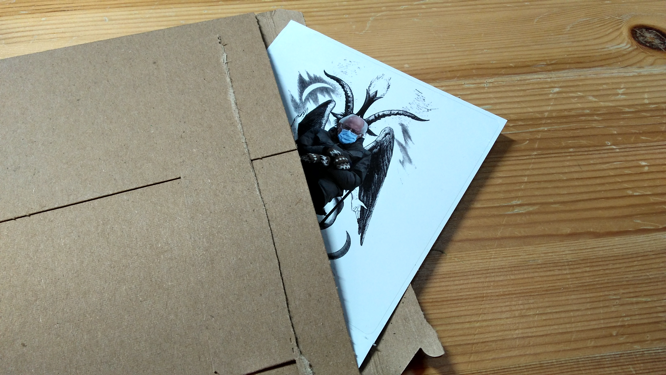 Also, the sample Berniemit(tens) / Baphomet sticker came in, and looks surprisingly great. (Check that out in the newsletter, YouTube, and Instagram.)

I’m going to try to add another merch item this month, but with that I’m going to have to think about what is next. I’m quickly coming to a point where I can’t stack any more merch items as perks on my existing Patron tiers. So, what to do? I could swap them in and out, which I’ll probably do anyway, to keep new designs rotating in (and I’ll have to figure out what schedule works for that too! Maybe every 5–6 months so that everyone gets a chance to grab a design on the 3-month cycle for the Patreon merch system?). But, if I want to add more merch on top of the existing items, I may need to create some new tiers. I’m currently thinking of adding a Propagandist tier, which will add full size wall posters to the previous merch items, and a Completionist tier, which will further add all the things, including t-shirts and everything else on top. In order for those tiers to work in Patreon’s merch system, which limits what I can add to a tier based on the pledge, I would probably have to make Propagandist a $60/mo pledge and Completionist a 120/mo pledge. But, they’d include a lot of fun merchy things! I don’t know if people will be interested in them, but it seems like I might as well create them and try, right?

But, the next merch item I’m planning is actually a series of mugs. But, the series would be 1 mug each 3 months, for a full series of 4. I’ve pretty much got 3 of the designs already in mind, but I’m not sure what to do for the fourth. I have to have all four done when I set up the sequence, so I need to figure it out. The first one will probably be the “Kill Me / Fill Me” mug design I’d created for Cafepress years ago.

And here’s an old glamour shot of the Cafepress mug, so it may or may not look the same when made by Patreon merch. 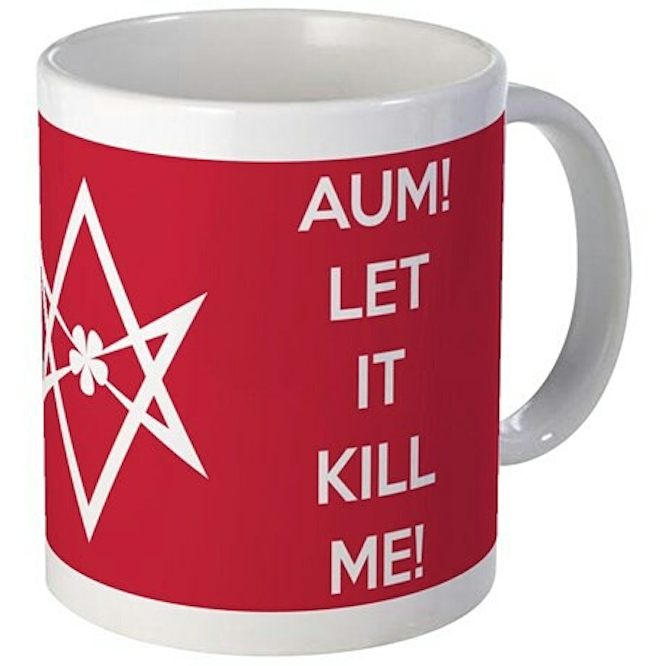 I also want to do one with Crowley’s more famous (of two) Coffee prayers. The first, of course, is: “O coffee! By the mighty Name of Power do I invoke thee, consecrating thee to the Service of the Magic of Light.” but there’s another which also mentions a sandwich: “I will go to the Café du Dôme and break my fast humbly with Coffee and Sandwich. May it strengthen me in my search for the Quintessence, the Stone of the Wise, the Summum Bonum, True Wisdom and Perfect Happiness!” Both from John St John, or Liber DCCCLX (Book 860). I don’t think it makes sense to do both of them in the same series, right? So, I might save the second one for the 2nd series. But, there’s two designs.

What about the fourth?! I did have another design I created for the old Cafepress site. I’m not sure if it is too close to the other one, or if this is something Patrons would also want. It’s got the “My life with the Fill Kill Kult” design.

That would be four designs! But, what do you think of these four ideas? Do you have some other idea that comes to mind?! I’m going to be thinking about this a little bit longer, but I want to get this set up and going before the end of this month one way or the other.

But, I kinda like all those ideas. If you love or hate them, or even if you feel meh about one or more, let me know! I mean, these mugs would be for you all!

Well, okay, I’m probably only going to be able to add these mugs to Deluxe Exchange (and above, if I create the additional new tiers), because of how Patreon’s merch system works, but … I would love to know what you think, either way.

I’ve been getting some interest in participation in the next zine, so I’m hoping that I’ll be able to do the next one around Aphelion in June. We’ll see. I may have to fill it with my own writing and memes, collected from the newsletter, but I’m hoping I get a bunch of other people to participate as well!

And, I’ve already had the first couple whispers from people looking forward to participating on the next anthology album, for which the call for submissions doesn’t even go out until June!

So, that’s the major Patron stuff I’ve got on my mind right now, for this monthly round up. I’ve probably missed something important, but only I’ll remember what after I send this, no doubt!

Thank you for your ongoing patronage here on Patreon! I really could not keep doing all this without your continued support. You really do make the magick happen, and I’m so very grateful for your help doing what I do. I just can’t ever say enough how much your support means to me, but I hope all that I’m able to do with the site and everything is clear evidence of what your support makes happen!

As always, if there’s anything soever, questions, comments, or concerns; or thoughts about what would help make your experience as Patron even more satisfying, get in touch!