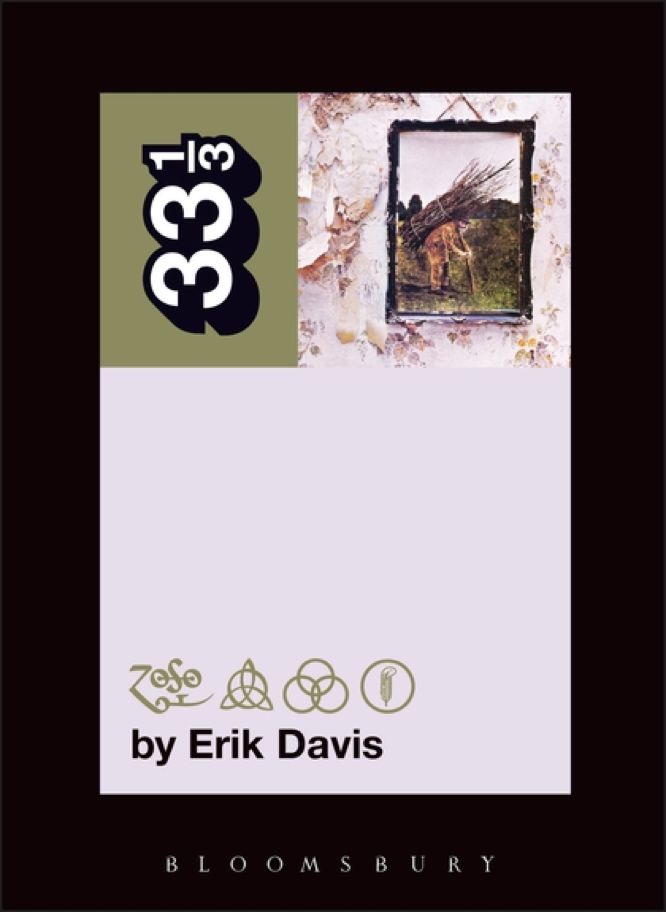 Erik Davis’ book-length assessment of Led Zeppelin’s fourth album delivered nearly everything I had hoped it would, along with a few things that I feared it might. The writing is often very witty, and Davis shows a real appreciation for the popular and esoteric cultural matrices in which the object of his musings is embedded, as well as a relatively sympathetic take on the band, and a profound respect for this record as an artistic achievement, albeit as he writes, “a mystery, wrapped in an enigma, stuffed in a cock.” (7-8)

The book spends an appropriately significant section on the material substance of the album as an artifact, discussed in connection with the emergence of the American post-industrial zeitgeist. The subsequent song-by-song review emphasizes the composition of the album as a whole: the fourth release of a band with four members, having four songs on each side. As a critical conceit, Davis introduces “Percy” (one of Robert Plant’s nicknames, as well as the questing grail knight Parsival) as the ongoing poetic speaker of the lyrics in all eight songs, enabling him to trace a unified arc of development through the various modes and moods of the album.

The “Percy”-based analysis isn’t always that persuasive, but Davis uses it as a framework to tease out technical effects as well as thematic elements both subtle and overt. For those of us who assimilated this album in our adolescence, much of the treat here is just coming back to it with a matured intellect and a sense of fresh inquiry. For instance, “The Battle of Evermore” is rather obviously a Tolkeinesque psychomachia, in a way that I could never have framed for myself in the days when I first evoked it from its vinyl talisman. (And you can get more of that sort of playfully-overwrought fusion of phonography and occultism on nearly every page of Davis’s book.)

Davis acknowledges a range of hostile criticism of Led Zeppelin, which he counters with varying degrees of zeal and success. He also cites some other sympathetic writers on the topic, who seem to be worth reading, along with the splendidly excessive occult research of paranoid born-again Christian–thanks to the demonic encounter he experienced at a Zeppelin show–Thomas W. Friend.

The exploration of Zeppelin’s precedents and predecessors is not quite as meticulous as I might have wanted. Davis’s (absolutely necessary) citations of Aleister Crowley are often sloppy, and he errs on Crowley biography even when correcting the earlier falsehoods of other writers (34). He fails to call out the influence of Harry Smith’s Anthology of American Folk Music, which contained both musical and magical germs of Led Zeppelin’s operations. And his citations of psychedelic philosopher Michael Hoffman’s “block consciousness” (122) would have been significantly complemented and enhanced with reference to Nietzsche’s doctrine of eternal recurrence.

Still, this is a short and eminently digestible volume, which manages to hit all the right notes in creative harmony with its topic. If, like Davis, and like me, and like “millions of other people now living, you can probably reproduce a decent mock-up of [‘Stairway to Heaven’] from memory,” (108) then this book has a lot to offer you.