An irregular hodgepodge of links gathered together … Omnium Gatherum for April 4, 2021

Welcome to the first Omnium Gatherum of this month! As usual, this one is open to all Patrons, so hello, everyone! (Also, as you’ll discover below, hello to everyone reading this on the blog a year from now!) Howdy to all, and enjoy!

I have some news about how I’m doing Omnium Gatherum posts to share. A year ago I started to make twice weekly Omnium Gatherum posts exclusive for my Patrons. I’ve decided when an OG is 1 year old on the library blog I’ll make it available to everyone! So, now everyone can go check out what they’ve been missing, or you can remind yourself what was being ominously gathered around the beginning of the quarantine, on the blog monthly archives for February 2020 and March 2020. And from now on, I’ll open up the next month of year old OG posts at the end of each month, so those from from April, 2020 will be available to the public at the end of this month, and so on …

Omnium Gatherum has gone through a lot of changes over the years. I started them, not for the library, but before I was even Librarian, as asides on my personal blog, with the oldest one I found just now from 2005, apparently, maybe (that appears to be when I started at first glance, but I wouldn’t be surprised to find I was doing them before then) and I’ve done them on both my on-hiatus tech geek blog and, of course, on the active library blog.

As a point of curiosity, on my personal blog, although I’ve not posted there since 2018, I actually have a bunch of subcategories for these asides. 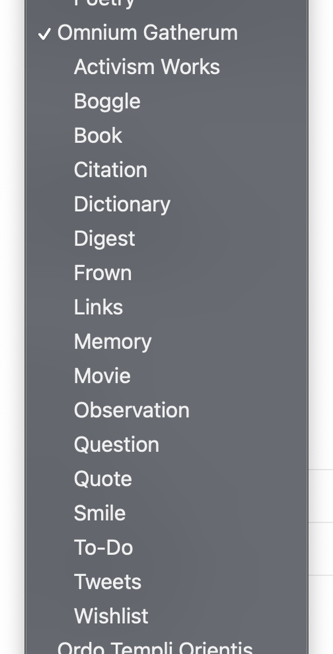 On both active library and on hiatus tech geek blogs, there’s no subcategories per se. Though I do nowadays tend to collect items for the OG posts on the library blog in loose groups around topics within each post. But I don’t label them. Are you curious what those are?

Currently, and I change this up when it makes sense to do so, I gather items in my Omnium Gatherum posts generally around these topic areas: timely, esoteric, books, science, pandemic, tech, paranoia, politics, culture, and funsies. So I try to keep time sensitive stuff at the top and save some fun and silly links for the end, and so on. Then, within these rough categories, I try to group items that are similar or that reflect on each other in some interesting or funny way. And, I may have just, this week, as I do sometimes, changed things up by moving “pandemic” items into “culture” or elsewhere, instead of having a separate topic, which I added some time last year!

Well, that’s a little picture into how I put these posts together. There’s a lot more I could say about the tools I use and so forth, if people were interested in that. I think you might be surprised at how much work goes into creating these posts. I am literally doing something for Omnium Gatherum every day!

As you know I’ve had a subscription option over on Bandcamp for a while now. Generally, that subscription option has been intended as an alternative to the $1/mo tip jar over on Patreon. Although Patrons do get more stuff, like access to the first Omnium Gatherum of the month! However, subscribers on Bandcamp do get one unique thing, and, where Patrons are offered a gratis download for each new issue as they release, subscribers are provided access to the entire back catalogue of exclusive This Is Not An Hermetic Library Anthology Album releases, which I added as a special little perk just for them. Currently, that’s just the last two years, since I started them, but every year there will be more of them, at least in theory!

As something brand new this month, I just added an optional membership upgrade to the gratis newsletter which will be a way to get my Omnium Gatherum posts as an add-on, as an alternative to Patreon, if anyone wants it. These are the same as what I post exclusively for 1 year on the library blog and send directly to ongoing Patrons of the library (so if you’re a Patron, you’ve already got access to these elsewhere!), but, although this doesn’t include any additional perks like patronage does, this is another way to get in on OG as an alternate way to help support my work as Librarian and keep Hermetic Library going and growing online!

Like the membership option on Bandcamp meant as an alternative to the Patreon tip jar, this option is meant as an alternative to the Omnologist tier; though there’s still more perks as an ongoing Patron than these offer, but both of these options exist for those that want them. And, idek, maybe, like how there’s a unique flavour for subscribers on Bandcamp, there might be more things later to help make Membership to the newsletter special and different if there’s enough interest?!

Being an ongoing Patron, I think, is still the best way to go, especially this year as I have been doing the ongoing experiment with Patreon merch! But, I hope that the options provide a welcome diversity and aren’t confusing. On the other hand, I suppose if one wanted to go all Pokémon about it, I certainly wouldn’t complain if people collected them all!

Speaking of Patreon merch, I did just recently post about the most recent new merch and status of all the rest, so if you haven’t seen that it’s from this week on Patreon. Shipping for the mini print has been ongoing for Omnologists, but I’ve not yet seen anything about fulfilment for the sticker starting for Epistemologists. I’m curious about that, but there’s so little information about how this all works. I presume that stickers will also start going out this month, but who knows? We’ll see! And, then, in addition to the mugs for Ontologist, I added actual 12×18 inch matte finish propaganda posters for a new Propagandist tier at the beginning of this month. Next month, I’ve got big plans for what I hope to add for merch, so if I can get it sorted there will be a lot more to say about that then. Also, I requested a sample of the new wall poster, so I should get that at some point this month, and I’ll share that in the usual places when it arrives.

Okay, that was a lot of Patron stuff to cover! Of course, the TL;DR of it all is: Thank you! Thank you for your ongoing support of my work and helping to keep Hermetic Library going. I hope that you have enjoyed the last month of activity, and that you continue to find value and joy in the coming months as well. I literally could not keep doing all that I do without you and your generous support, so thank you, thank you, and thank you again!

And, as always, if you’ve questions or concerns, or ideas about what would make your experience as Patron better, let me know!