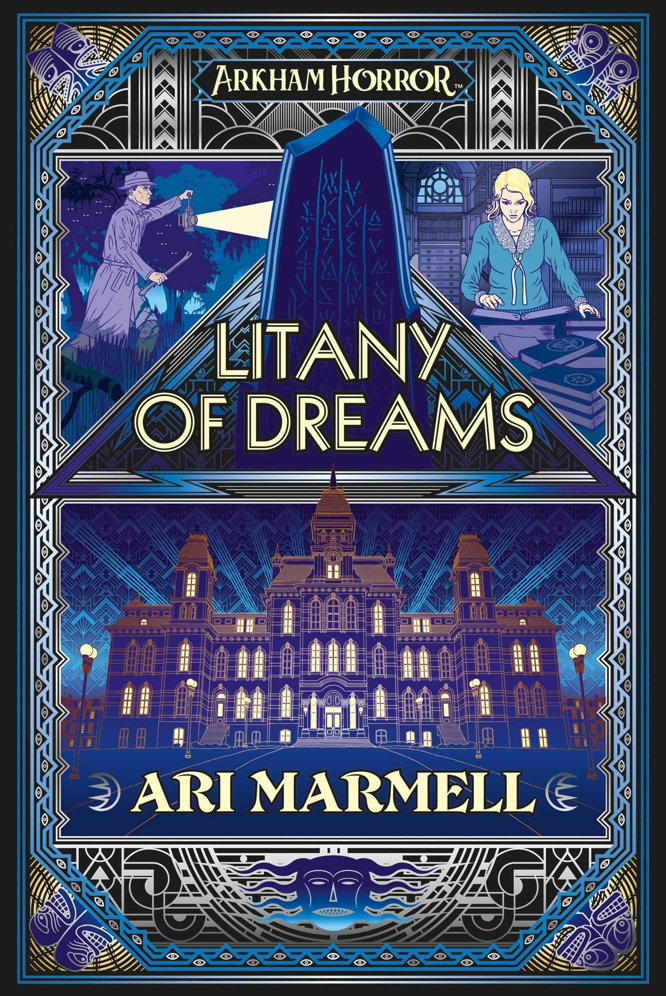 Among the recent run of Arkham Horror novels, Ari Marmell’s Litany of Dreams is in some respects the most conventionally Lovecraftian. It features protagonists based out of Miskatonic University who encounter a preternatural horror that has taken over an insular community in the Massachusetts back country of the Hockomock Swamp. So far, so Cthulhu.

On the other hand, the principal protagonist is gay, the chief secondary protagonist is a formidable indigene of arctic Greenland (an “Inuit” according to the character’s insistence), and other secondary protagonists are women, so in that respect the story tracks better with the 21st-century diversity of hero-investigators in the Fantasy Flight Arkham Files games than it does with the old pulp Yog-Sothothery. I don’t think it quite passes the Bechdel Test, however.

The only Arkham Files game character who features in a significant way in this book is Daisy Walker, librarian at the Orne Library of Miskatonic University, and many aspects of the story are pleasantly bookish. The plot centers around the transliteration of an ancient inscription, and there are occasional references to the pleasure reading of various characters, noting such authors as Bram Stoker and Agatha Christie.

Unsurprisingly for a book written during the novel coronavirus pandemic, it features fears about a recurrence of epidemic influenza in 1923 Arkham. There is also more than a little “zombie apocalypse” flavor to the story. The references to the Silver Twilight Lodge in Arkham are minimal, and instead there is an even higher order of occult conspiracy invoked.

An elaborate epilogue introduced various possible sequel opportunities, making me wonder if Marmell, an author of several series, was deliberately angling in that direction.