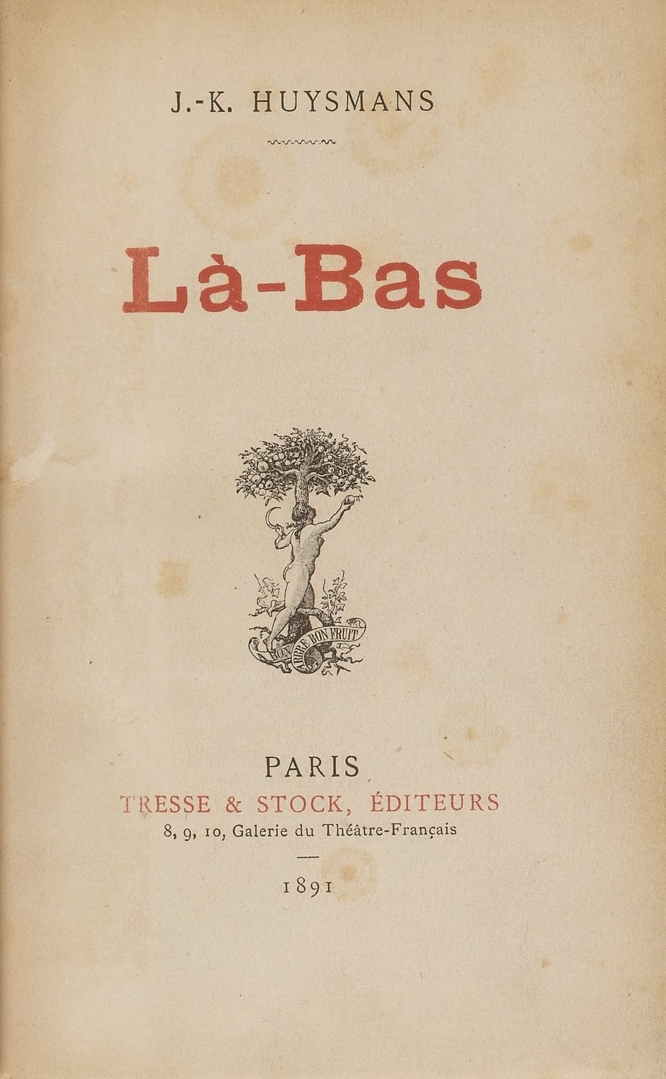 When Joris-Karl Huysmans wrote Là-Bas (published in 1891), he was already notorious for his seminal novel of decadence Au Rebours. Là-Bas introduces Huysmans’ autobiographical protagonist Durtal as a medievalist antiquarian. In the course of his researches into the fifteenth-century diabolist Gilles de Rais, Durtal becomes aware of and then infiltrates a modern Satanist sect. This book was a literary success, and its sale was banned in French railway stations.

The arch-Satanist of the book, Canon Docre, was based by Huysmans on an actual clergyman from Bruges, while an opposed character, the mystic Doctor Johannes, was modeled on the heretic priest Joseph-Antoine Boullan. When Huysmans met him, Boullan had recently assumed the governance of a neo-Gnostic sect first organized by Eugene Vintras.

Huysmans had networked among the occultists of his day, including Gerard Encausse and his neo-Martinist set and others associated with the Kabbalistic Rose-Croix of Peladan. But he alienated himself from all of these when he unwittingly chose sides in an ongoing feud between Boullan and the neo-Rosicrucians, with the latter chiefly represented by Stanislas de Gauita and Oswald Wirth. Involving himself in this scene, Huysmans experienced a delicious paranoia that the novel communicates beautifully.

Boullan died in 1893 and Huysmans’ friend Jules Bois accused the Paris Rosicrucians of having magically assassinated him. So the conflict persisted.

Five years after the publication of Là-Bas Arthur Edward Waite wrote that Monsieur Huysmans “has given currency to the Question of Lucifer, has promoted it from obscurity to into prominence, and has made it the vogue of the moment.” That moment, of course, was the acme of the Palladist conspiracy theory of Leo Taxil, postulating an elite of satanic sex-fiends at the heart of global freemasonry.

A generation later, when Aleister Crowley issued a reading list for his students, he called Là-Bas “An account of the extravagances caused by the Sin-complex.” In addition, it is valuable to latter-day Thelemites for its sardonic humor, its intuitions about certain features of Eucharistic magick, and its veiled references to historical antecedents of the EGC rite.