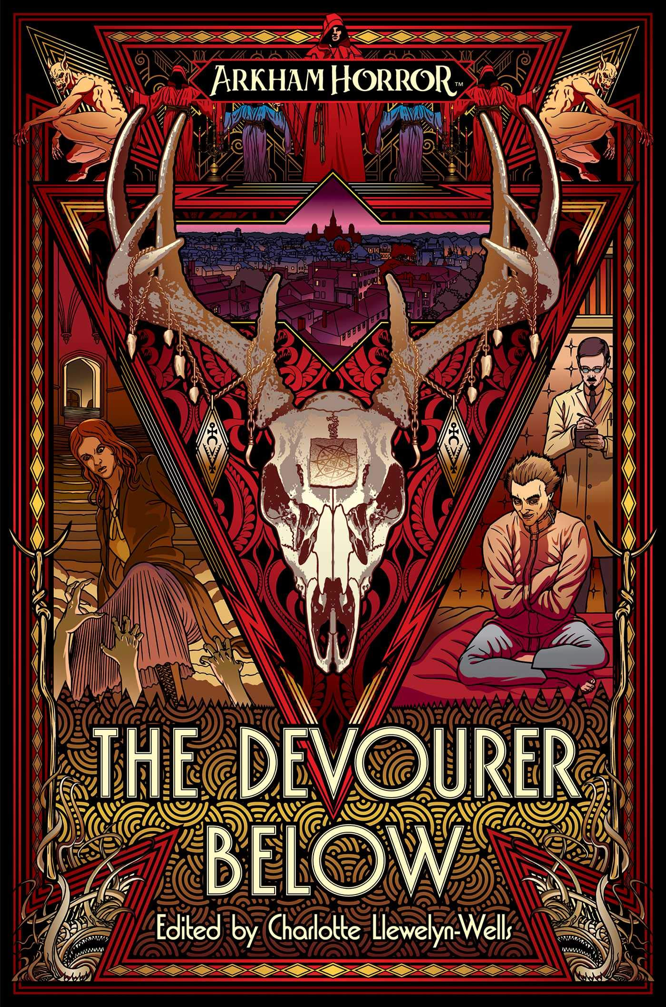 The Devourer Below is the fifth volume of Arkham Horror fiction to be issued under the Aconyte imprint. While the previous four have been novels, this one is a collection of short stories by various authors. I was thus expecting a wide assortment of tales, joined only by their early 20th-century Arkham, Massachusetts setting and the involvement of assorted investigator characters from the Fantasy Flight Arkham Files games. I was in fact pleasantly surprised to find that these stories are far more interrelated than that.

Players of Arkham Horror: The Card Game may recognize “The Devourer Below” as the title of the third and final scenario of “The Night of the Zealot,” the campaign included with that game’s core set. All of the stories in this book relate to that starter campaign, featuring the servitors of the Great Old One Umôrdhoth. (Umôrdhoth is based on Mordiggian, from Clark Ashton Smith’s story “The Charnel God.”) Such servitors are largely a mix of ghouls and human cultists.

Specific enemy characters from the card game campaign figure in the stories, as do the important investigator allies Leo De Luca and Lita Chantler. Investigator protagonists include Tony Morgan, Carolyn Fern, Joe Diamond, Daisy Walker, Agnes Baker, Wendy Adams, and Finn Edwards. On the whole, I found the enemy-focused stories more satisfying than the investigator-centric ones, but I liked both and appreciated the variety.

As a suite of connected tales of yog-sothothery, The Devourer Below is just fine. As a supplement to the Arkham Horror games, it is good. As an amplification of the core set adventure cycle in Arkham Horror: The Card Game, it is very good.

This book appends a “tease” reprint of the opening chapter of Ari Marmell’s Arkham Horror novel Litany of Dreams, oddly included in the table of contents as if it were one of the stories written for this volume. It also sports the third Arkham Horror fiction cover art by John Coulthart. I like these highly detailed multi-panel covers a lot.