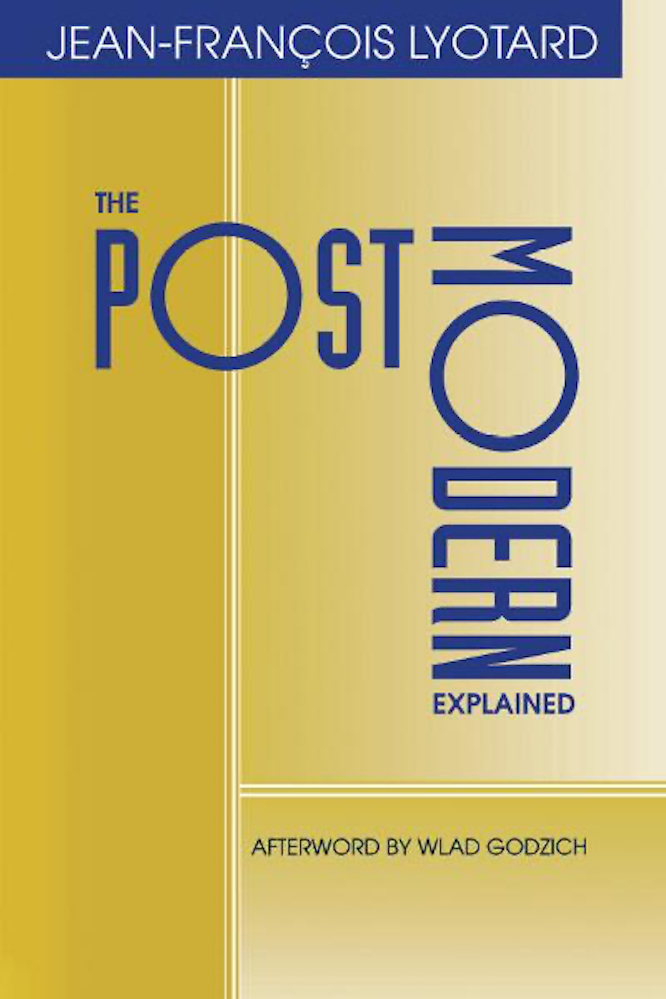 Postmoderne expliqué aux enfants could potentially be read as “The New Aeon Explained for Babes of the Abyss.” Lyotard suggests that modernity is characterized by a critical position common to Augustine and Kant, contrasting with the “empiricocritical or pragmatic” posture of the postmodern. (63) Technoscience and capital together have effected an “escape of reality from the metaphysical.” (9)

The author has sometimes been misunderstood as an advocate for the postmodern, rather than a diagnostician of it, and in several pieces of the correspondence collected here the reader can see his frustration that the public misses his opposition to “capitalism’s regime of pseudorationality and performativity.” (73) He is not at all smug about the demise of the elements of modernity that give way to the postmodern, but he is also convinced and convincing that retreat to the modern is not a viable option.

In discussing the failure of modern strategies of legitimation, he glosses Hegel to the effect that “the sole normative instance, the sole source of law, the sole y, is pure will — which is never this or that, never determined, but simply the potential to be all things. So it judges any particular act, even when it is prescribed by law and executed according to the rules, as failing to live up to the ideal. Terror acts on the suspicion that nothing is emancipated enough — and makes it into a politics.” (54) While the ideology of capitalism does not itself give rise to such terror (because it deals in evanescent needs rather than final norms), it is still vulnerable to it, in ways that have become ever more evident in the decades since Lyotard wrote the “Memorandum on Legitimation” that is the longest of the missives and essays collected here.

The afterword by Wlad Godzich constitutes an insightful summary of Lyotard’s efforts prior to the publication of Postmoderne expliqué, and it might be profitable to read it first for those who have no previous familiarity with either The Postmodern Condition or The Differend. Reading it myself, I conclude that it will indeed be the child who will master the aeon, but I also register how difficult the achievement of childhood is becoming.