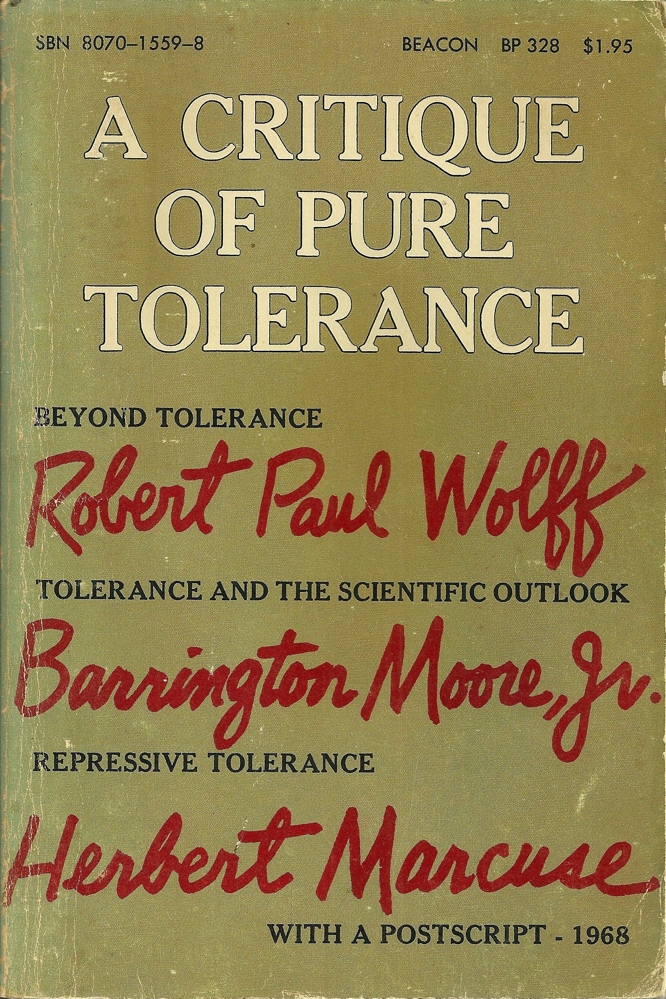 This slender mid-1960s volume assembles essays from a trio of leftist Harvard academics, addressing shortcomings in the vernacular political understanding of tolerance for modern American society. The three pieces are arranged in ascending authorial age, as well as anger. As the authors remark in their foreword, “The tone of indignation rises sharply from essay to essay” (vi).

The junior contributor (and now only surviving one) was Robert Paul Wolff, an expert on Kant. In his essay “Beyond Tolerance,” he discusses the different ways that tolerance operates in the pluralist industrialized world of the twentieth century, as contrasted with the ideas and ideals of eighteenth- and nineteenth-century individualist liberalism. He allows that pluralism does go some ways to accommodate community concerns, but concludes that liberal tolerance fails to support needed reforms in a pluralist setting. He also observes and explains the peculiar antagonism between pluralism and socialism (50-1), showing how–in 1965, as more than half a century later–the ingrained pluralism of the Democratic Party is the really motivated and effective opposition to any possible socialist Left in the US. Ultimately, Wolff argues for the obsolescence of pluralism on just these grounds.

The second essay is by sociologist Barrington Moore, Jr. For his purpose of addressing “Tolerance and the Scientific Outlook,” he characterizes the “scientific” very broadly as the “secular and rational,” offering this useful touchstone: “For the essence of science, I would suggest, is simply the refusal to believe on the basis of hope” (55). While acknowledging the difficulty of making rational determinations regarding political change, he also emphasizes its necessity on the part of those intellectuals whose role is to criticize both the oppressive status quo and poorly-conceived brutal attacks on it.

Herbert Marcuse is best known as a member of the Frankfurt School and serves as a bogeyman in today’s right-wing scaremongering about “cultural Marxism.” His “Repressive Tolerance” in this volume is in fact a frequently-referenced document in such discourse. On its own, and in combination with the other two essays of the book, I found it to be reasonable and still relevant. Marcuse points out that while a tolerant society is an unimpeachable liberal ideal, the practice of indiscriminate tolerance in an existing oppressive society redounds to the advantage of the oppressors and the perpetuation of oppression.

“Tolerance toward that which is radically evil now appears as good, because it serves the cohesion of the whole on the road to affluence or more affluence. The toleration of the systemic moronization of children and adults alike by publicity and propaganda, the release of destructiveness in aggressive driving, the recruitment for and training of special forces, the impotent and benevolent tolerance toward outright deception in merchandising, waste, and planned obsolescence are not distortions or aberrations, they are the essence of a system which fosters tolerance as a means for perpetuating the struggle for existence and suppressing the alternatives.” (83)

So much has that system advanced in the last half-century, that we can easily see the intensified versions for each of Marcuse’s examples. Publicity and propaganda are now personally tailored to each brainwashed smartphone user. Gun “rights” and ammosexual cultural politics foster homicide rates challenging for automobiles to compete with. Mercenary soldiers employed by the US employ outnumber enlisted personnel in deployments to combat zones, while “volunteers” continue to be damaged and destroyed by “forever wars.” And climate catastrophe is a collateral benefit of a petrochemical-driven disposable consumer society. (It perpetuates struggle and suppresses alternatives.)

The perceived currency of Marcuse’s essay likely stems from its closing passage, with its clear relevance to the Black Lives Matter movement’s protests against police violence. Again, I see nothing to argue with here. In fact, I find it refreshing to see my own view on the question set forth so succinctly. Here is the passage in question:

“Law and order are everywhere and always the law and order which protect the established hierarchy; it is nonsensical to invoke the absolute authority of this law and this order against those who suffer from it and struggle against it–not for personal advantages and revenge, but for their share of humanity. There is no other judge over them than the constituted authorities, the police, and their own conscience. If they use violence, they do not start a new chain of violence but try to break an established one. Since they will be punished, they know the risk, and when they are willing to take it, no third person, and least of all the educator and intellectual, has the right to preach them abstention.” (116-7)

My 1969 copy of the book includes a “Postscript 1968” for Marcuse’s essay. In it, he returns to his earlier provocation in suggesting “the practice of discriminating tolerance in an inverse direction” (119). He admits that to implement such a proposal would apparently require some sort of elite dictatorship to judge between progressive and regressive agendas, extending tolerance only to the former. But he concludes, “the alternative to the established semi-democratic process is not a dictatorship or elite, no matter how intelligent, but the struggle for a real democracy” (122). Still, a necessary ingredient of that struggle is the disavowal of “the pernicious ideology that tolerance is already institutionalized in this society” (123). Fair enough, but it’s also easy to see how advocates of regressive politics would seize on the somewhat confused rhetoric Marcuse constructs around this point in the original essay as an opportunity to indict him.