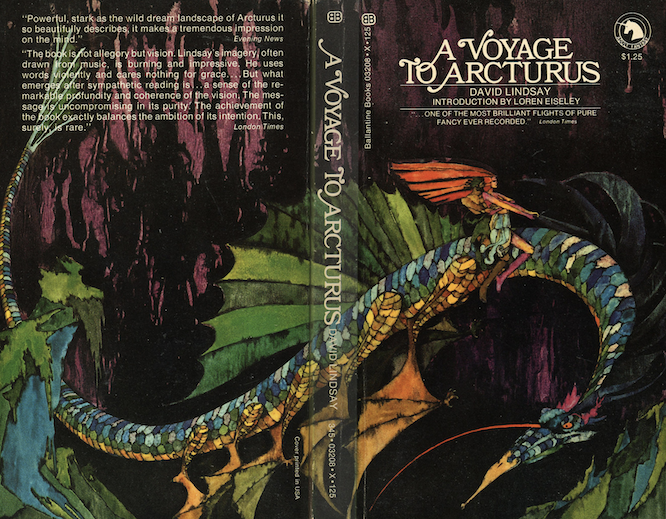 David Lindsay’s visionary first novel A Voyage to Arcturus was influential among writers of twentieth-century fantasy, although its metaphysical preoccupations and sheer strangeness have barred it from a wider readership. Michael Moorcock called the book “one of the great originals,” but it clearly has roots in Blake and the Romantics. In particular, “Klingsohr’s Fairy Tale” by Novalis tells of a series of adventures leading to the reunion of the heavenly court of Arcturus with the terrestrial household of humanity, and the triumph of Eternity over Time, and it seems to have been an influence for Lindsay. But Lindsay’s Arcturian tale involves a more pessimistic gnosis, in which the wrong of the beginning is continually expressed in conflicts and obscurities.

My copy of the book is the 1985 Citadel Press edition, to which is prefaced “David Lindsay and the Quest for Muspel-fire” by Galad Elflandsson. Aside from a biographical sketch of Lindsay and a short bibliography, this essay mostly consists of plot spoilers and debatable interpretations, despite Elflandsson’s professed intention to “eliminate some of the confusion one would normally find upon reading it ‘cold'” (9). I recommend leaving it for after reading the novel.

The apparent protagonist of A Voyage to Arcturus is Maskull, a name that is never supplemented or fully explained, although a start is made by the character Panawe, who draws on his intuition to ask, “Has there been a man in your world who stole something from the Maker of the universe, in order to ennoble his fellow creatures?” (58). This particular characterization of the Prometheus myth does seem on some level to underlie the action of the larger book.

The story begins with a bourgeois séance in London, carefully introducing a large set of persons who become entirely irrelevant after the first chapter. Maskull, along with Nightspore and Krag, characters who are pivotal to the novel, are late arrivals here for what turns out to be a debacle. These three then go to Scotland, in order to embark in a “torpedo of crystal” (43) to the planet Tormance, which is in the double-stellar system of Arcturus. Maskull loses consciousness during the trip (projected to take nineteen hours), and awakes on Tormance with no trace of the ship or his companions.

Maskull’s adventures across Tormance take up the bulk of the book. He travels from place to place, in each encountering one or two figures with whom he develops relationships that involve affection, hostility, inspiration, and instruction. A peculiar feature of his journey is that his physiognomy is repeatedly altered, particularly by the growth and attenuation of new sensory organs in his forehead and his breast. The people he encounters often have similar or related features. He moves northwards throughout, at first in a sort of aimless way, but with a mounting determination towards the end of the tale. In addition to its people, Tormance features bizarre life-forms that transgress boundaries among animal, vegetable, and mineral; colors unknown on earth; and surpassingly strange landscapes.

The level of enigma and exotic adventure in this book is off the charts, and the best comparandum for these features may be Lloyd’s Etidorhpa. (In fact, the books complement each other: Arcturus can be read as the ouranian sequel to the chthonic Etidorhpa.) Why did René Laloux die without making this story into an animated feature? The injustice of the universe is adequately demonstrated.