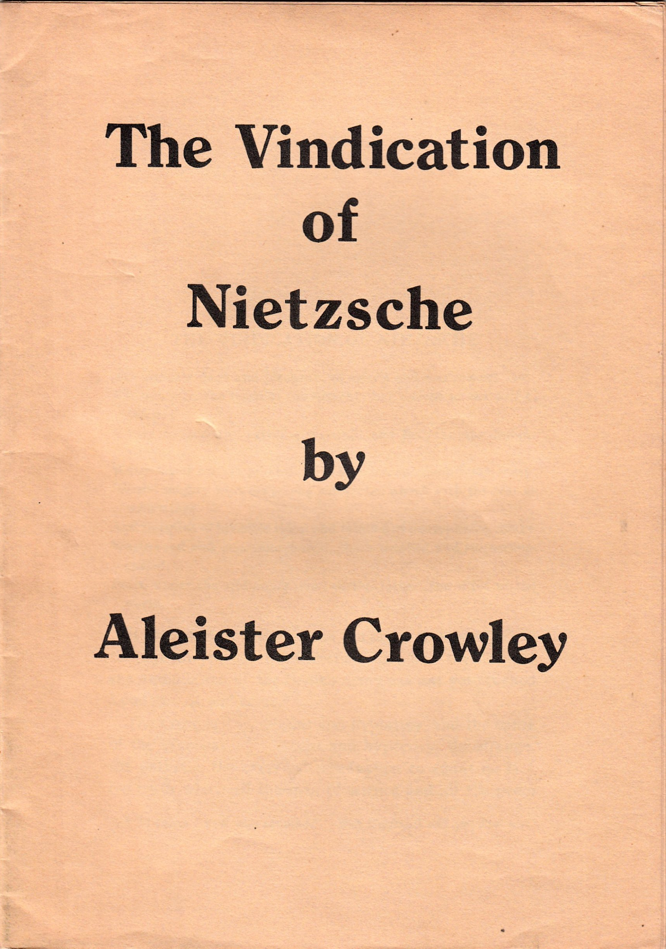 To a casual reader, this reprint of Crowley’s essay is a little bewildering: there’s hardly anything about Nietzsche in it, other than a brief exoneration of him from the charge of being “German.” The reader’s familiarity with Nietzsche is overtly assumed. For the most part, the matter of the article consists of vituperation against “English cant and hypocrisy” (the “English” was conspicuously redacted in the original printing during WWI, and quietly ignored in reprints) and long quotes from the holy books of Thelema and Crowley’s The World’s Tragedy. But these, you see, vindicate Nietzsche as prophet.

The circumstances of the war show Britain at a disadvantage because the Germans are using Nietzsche to good effect. (They were issuing copies of Zarathustra to their soldiers, among other things.) Meanwhile, Britain has comparable–nay, superior!–resources in Darwin and Swinburne, but these are pent up in the “thinking classes,” while “prudery” dictates the widespread rejection of the truths that they and Nietzsche offer.

But “even in England” Nietzsche’s true agenda is coming to fruition in a “New Religion” illustrated by passages from The Book of the Law. Although Crowley elsewhere described Anna Kingsford as the Baptizer John anticipating his Thelemic movement, in this essay Nietzsche serves as “the dawn-star” to herald a “son of man to be a Sun of men.” The latter is of course Aleister Crowley the Thelemic “Apollo … Antichrist … Saviour of the Earth!”

I’ll drink to that, though I doubt Nietzsche would. It’s impressive how well the Magician of Thus Spake Zarathustra Part IV resembles Crowley. His incantation to the “unknown god” correlates richly with Crowley’s own doctrine of the Holy Guardian Angel. Nietzsche’s Magician was probably modeled on Wagner, but in any case, he’s merely one of the “higher men” who are bridges to the overman: roads to be trodden on, not a goal to attain, and certainly less far-seeing than Zarathustra himself.

As Borges remarked of Kafka, “the fact is that every writer creates his own precursors.” This is especially the case when the precursor was already writing in an anticipatory, proleptic manner. After studying Crowley’s work (even with the omission of the pertinent “Antecedents of Thelema” essay and The Vindication of Nietzsche), a reader will no longer perceive Rabelais and Nietzsche in their troglodytic shadow-forms.

By instancing his own work as the fulfillment of that which was to come, a writer exerts a causal effect on the past, he wills backward in the phrase of Nietzsche’s Zarathustra. Predictably, more recent writers have attempted to create Aleister Crowley as their precursor, but none have had the sort of success that he did (on multiple channels!) with that operation.