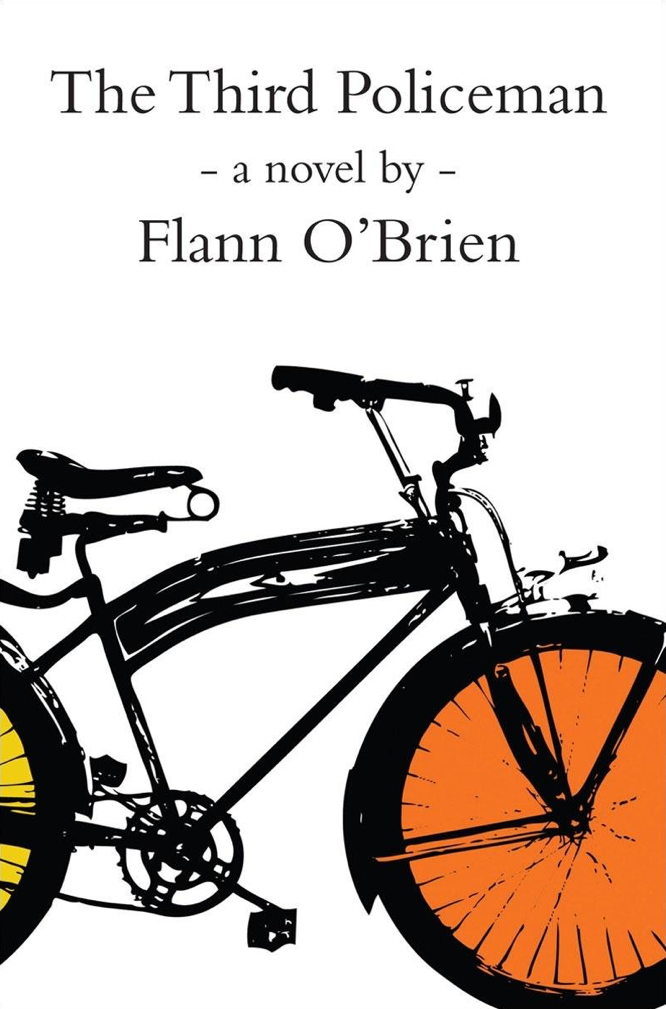 I am puzzled by the jacket copy on the John F. Byrne Irish Literature Series edition of The Third Policeman, which calls it a “brilliant comic novel.” Surely, this story is dark as dark can be, and portrays a tragedy with exacting, clinical detail. The tale is in fact profoundly absurd, and checkered with the narrator’s preoccupation with a perverse body of scholarship surrounding a narcoleptic alchemist. But that’s bicycling for you.

To experience the full effect of this novel, I recommend avoiding advance glosses of the plot, although the plot is really only a fraction of the value of reading it, but this plot is reeled out in an unusual and impressive manner. Moreover, such glosses tend to have inaccuracies, like the jacket copy’s misconception that the “narrator … is introduced to … de Selby’s view that the earth is not round but ‘sausage-shaped'” while at the police station, when in fact he has clearly done his exhaustive study of de Selby long before.

The 1999 introduction by Denis Donoghue insists on quoting a piece of a letter from author Flann O’Brien to William Saroyan, in which the ending of the book is perfectly spoiled. This same letter excerpt also appears at the end of the book, having been appended by the editors at the original (posthumous) 1967 publication, apparently in the belief that readers might need this assistance after failing to comprehend what they had read, despite it being as plainly put as possible. Donoghue’s introduction is otherwise worth reading (after the novel), with its brief biography of O’Brien (pseudonym of Brian O’Nolan) and a debatable attempt to classify the book as Menippean satire.

But the real attraction of this book is the wonderful language, which alternates among three modes. There are artful descriptions of imponderables. “The silence in the room was so unusually quiet that the beginning of it seemed rather loud when the utter stillness of the end of it had been encountered” (105). There are careful reviews of academic argumentation. “His conclusion was that ‘hammering is anything but what it appears to be’; such a statement, if not open to explicit refutation, seems unnecessary and unenlightening” (144-5 n). And there are personal encounters featuring ambivalent dialogues in spare and careful language. “And as I went upon my way I was slightly glad that I had met him” (49).

The book is organized into twelve chapters. If these reflect an esoteric infrastructure such as astrological houses, I haven’t persuaded myself so. The pace of the prose is fast, even if the pace of events described is sometimes so slow as to be entirely immobile. The Third Policeman had been on my virtual TBR pile for many years, and my actual one for some months, when I finally read it in a matter of a few days. Alas, I may read it again!