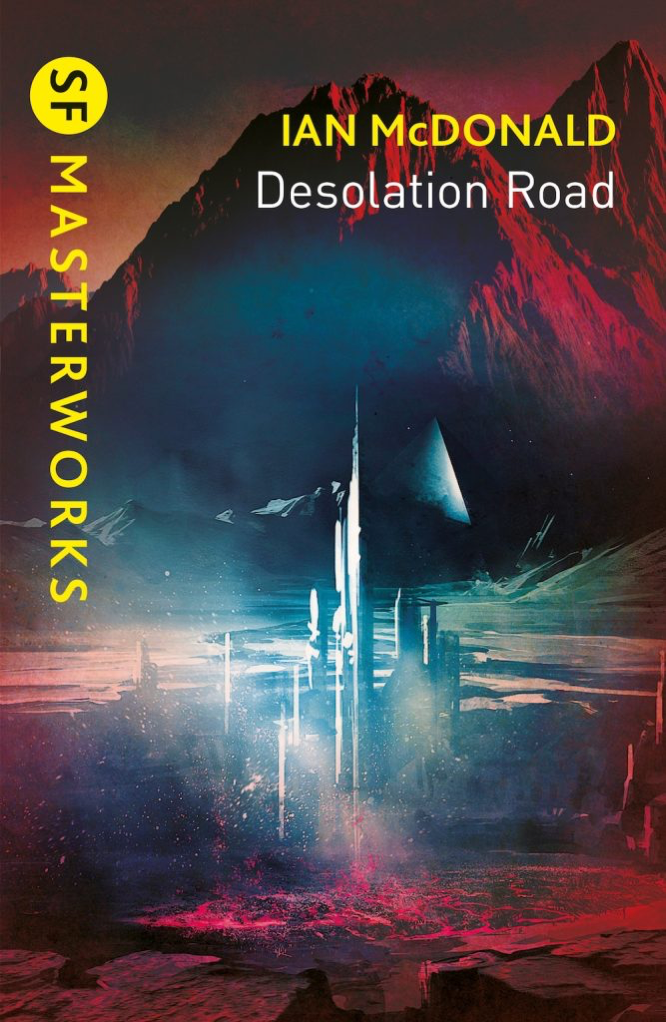 The jacket copy promising “every conceivable abnormality” had me expecting a more comical romp than the wry and profound storytelling McDonald provides in his first novel. Although in many ways the most science-fictiony of science fiction–a story set on Mars during a period of human settlement–there are many other literary veins enriching Desolation Road. The little serendipitous town by the train tracks certainly has a 19th-century-US Western feel to it that gave the book a steampunk vibe (this well before the coinage of the genre label). Some readers have accused McDonald of “magical realism” in this Martian novel, which nevertheless intensely engages religious and political themes. The net effect for me was something like a hybrid between Little, Big and Dune.

There must be many influences and allusions that flew past me. Critics commonly point to homages to Jack Vance and Ray Bradbury. The 1985 Terry Gilliam movie Brazil is “sampled,” if you will, in chapters 25 and 35. Cory Doctorow notes that the Catherine Wheel in the religion/planetary administration of McDonald’s Mars alludes to the music of David Byrne. It’s clear that McDonald has taken the old Clarke “indistinguishable from magic” saw to heart, and thus lays himself open to the charge of fantasy in SF drag, but if time travel is acceptable as science fiction, the rest of this kit should pass muster.

Sometime around page 150 I started to wonder, “What’s with all the characters being sexually active at the age of nine?” It wasn’t until I read about the grandfather of mature grandchildren thinking “the thoughts a man of forty-five thinks” that I realized these are Martian years! There are no C.E. dates in the book, but the story must start in the 28th century at the earliest, given some information about the timescale of “manforming” Mars. It takes place over roughly three human generations, each of which conveniently corresponds to a “decade” in Martian reckoning (i.e. 18.8 of our years).

McDonald very comprehensively adheres to the framing of Mars as “the world,” with the word “earth” used only to reference soil and planetary surface, while planet Earth is called “the Motherworld.” And still the Martian milieu is full of clever evocations of 20th-century mass culture.

The chapters are short and delicious, the vivid characters abundant, and the plot is so manifold that each of chapters 57 through 63 constitutes an independent climax, leaving room for a further half-dozen chapters of denouement and closure. It is a well-formed independent novel, and it does not in any way beg a sequel. The one McDonald eventually wrote (Ares Express) doubtless leverages the terrific world-building in Desolation Road, but I won’t be surprised if it is at a significant remove from the characters and events in its predecessor.

This is one of those books that I devoured rapidly, and then toward the end I started to feel sad that it would soon be over. I recommend it without reservation.