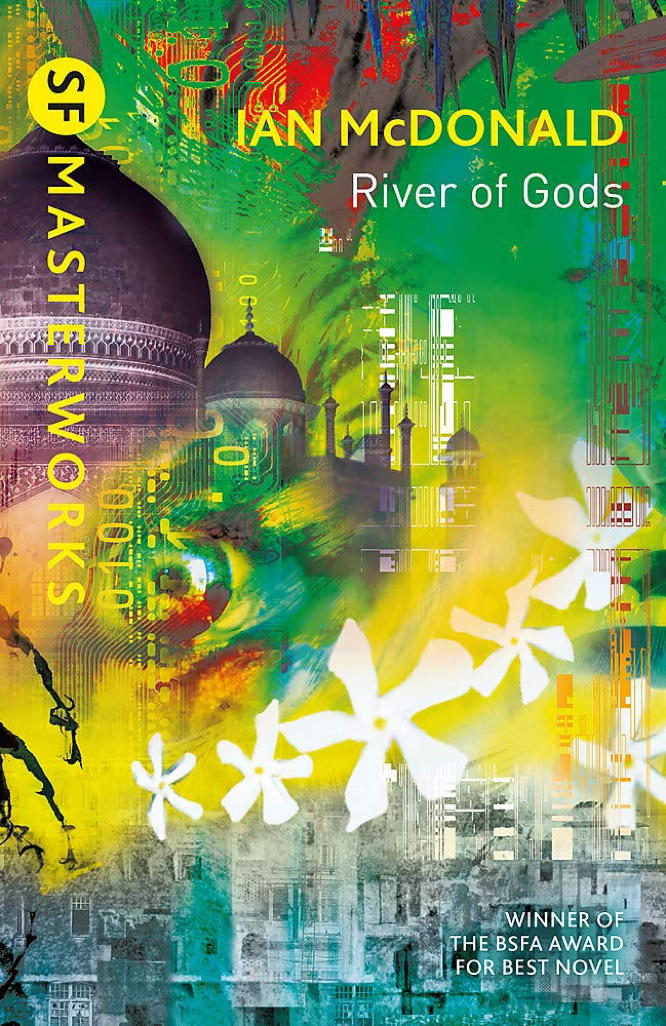 The “river” of this amazing work of science fiction is not merely Ganga Mata–the goddess who is the river Ganges–but also the flow of human life and experience on which the god-like artificial intelligences of the novel are borne. The human characters begin as separate tributaries, and their stories twist and merge with each other as they rush down into the watershed of an imagined history of the mid-21st-century. These characters inhabit niches throughout the spectrum from the absolute top to very nearly the bottom of Varanasi society, with a couple of American academics and an Afghani-Swedish journalist thrown in for good measure. Although the book takes place on the eve of the centennial of Indian Independence from Britain, its political situation describes a balkanized subcontinent in which independent Bharati and Awadhi states are on the brink of war for control of water resources. (It goes without McDonald’s saying, that the epochal drought is a function of climate change and the exhaustion of Himalayan glaciers.)

The futurological scenario of this book doesn’t feel at all dated, despite the fact that it was first published seven years ago–a long time at today’s pace of cultural and technological change. The two tiny clinkers naturally relate to personal electronics: McDonald’s “palmers” failed to anticipate that everyone’s pocket computer would be subordinated to the concept of a phone, and his use of “the Tablet” to denote a unique piece of espionage data hardware falls a little flat in the wake of iPads and their competitors.

The novel’s setting presupposes an assortment of post-human types, in addition to great masses of “ordinary” humans with virtual-reality headsets and nanotechnologically engineered pharmocopoeia. There are genetically enhanced “brahmins” who age at half the ordinary human rate, with immunity to many degenerative diseases. The oldest of these are in their early twenties, all with great influence, money, and native intelligence, but they look like ten-year-olds. There are “nutes,” who have “stepped away” from masculine and feminine gender identification into a third sex, surgically created, with erogenous cues tied to subdermal buds on their forearms. And there are artificial intelligences (“aeais”) beyond generation 2.5, the point where they are smart enough to pass a Turing Test, and to know when it is in their interest to fail one.

This is a big book: a 600-page doorstop, but it reads fast like a rushing river. Where the events of McDonald’s lovely debut novel Desolation Road take place over three human generations, the course of River of Gods spans a mere three weeks. And into that it packs political intrigue, edge-of-the-envelope scientific speculation, love stories, violent deaths, profound disillusionment, and, gosh, other stuff besides. The plot is full of semi-surprises; McDonald is an artful stylist who provides enough information to sometimes create dramatic irony by giving the intelligent reader an edge on the characters, but often stuff just happens in ways that are jaw-dropping at the time, but seem inevitable in retrospect.

Anyone who can enjoy thoughtful science fiction should love this book.