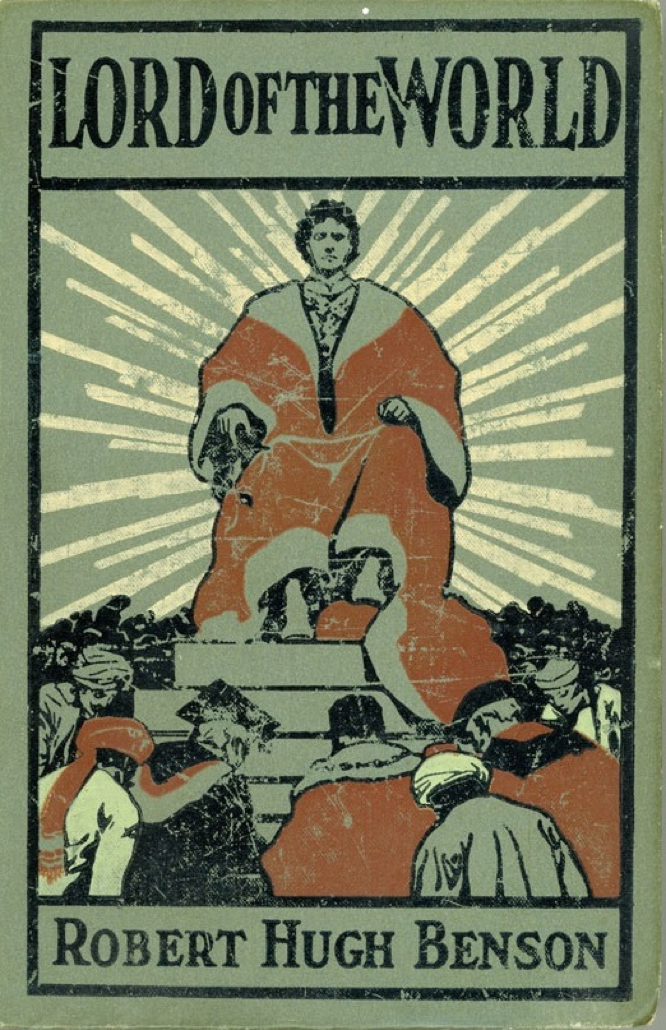 The 1907 novel Lord of the World was reissued by an American Catholic press in 2016 in response to a repeated approbation of the book by Pope Francis, who claimed that it illustrated what he called the threat of “ideological colonization” (ix-x). It has also been held up as a seminal example of dystopian science fiction, and was certainly in part written as a rejoinder to the political imaginings of H.G. Wells.

As “science” fiction, this book does not impress. Propeller-driven aircraft (“volors”) allow for travel from London to Rome in twelve hours’ time and for aerial bombardment. The story anticipates for the early 21st century the “perfection” of telegraphy (252)–but the existence of neither radio nor telephony, let alone television. A cutting-edge means of mass communication is the widespread posting of placards in urban nodes for mass transit. A simple respiratory device for euthanasia has been developed and legitimized both for eugenics and suicide. Along with a peculiar emphasis on rubber carpets, those pretty much exhaust the technological innovation forecast in this book.

Author Robert Hugh Benson’s speculative political history of the 20th century is mostly set forth in a prologue which he himself calls “tiresome” and advises the reader to skip if one is more interested in narrative than exposition. It charts the appearance of Communist governments by democratic means throughout the industrialized Western countries. Nation-states have become consolidated into three great alliances (America, Europe, and the Eastern Empire), which in the course of the novel become departments of the one-world government under the charismatic diplomat-cum-global-sovereign Julian Felsenburgh. The dispossessed royalty of Europe have rallied around Catholic Rome, both ideologically and physically.

Casting the remarks by Pope Francis in a somewhat ironic light, the actual economic and military colonization wrought by 19th-century imperialism goes absolutely unquestioned by Benson; Africa has been subject to a “peaceful partition” (131) among its dominators, and every individual character that appears in the book is white as can be. Even the theoretically significant Eastern powers are abstracted and offstage.

The secular religion promoted by Felsenburgh is called “Humanitarianism,” and it predictably becomes an oppressive and persecuting force. “It is Pantheism; it is developing a ritual under Freemasonry; it has a creed, ‘God is Man,’ and the rest” (10). Judaism has evidently vanished without a trace, and Islam has been prepared for its assimilation to the global cult by becoming “esoteric” (272) through the leaven of Sufism. Protestantism has ultimately dissolved as “nothing more than a little sentiment” (5). Everyone knows that Christianity is stupid.

Although Benson imagined that Catholic organization and administration would be centralized and simplified during a secularizing 20th century, he did not foresee major liturgical reforms, such as those undertaken by the Second Vatican Council. In a telling inversion of the actual turn of Catholicism to a diversity of popular languages, he has even the Catholic laity take up the use of Latin in ordinary speech. This they do in resistance to the invidious Esperanto fostered by international Communism, which has become an official language even in the English government.

Benson was the son of an Archbishop of Canterbury, who ordained him to the Anglican priesthood. He converted to Catholicism a few years after his father’s death, and became a Catholic priest in 1904. He plays with a quasi-autobiographical trope of celebrity conversion in the first section of the novel, where the mother of a prominent English Communist politician converts to Catholicism.

It is easy to conjecture that Benson’s novel might have influenced Charles Williams’ All Hallow’s Eve, which I read last month. But where Williams’ aspiring antichrist never quite attains to the office of “Lord of the World,” Felsenburgh sees his career through to a final battle at Armageddon. This finale–much like the one in Williams’ War in Heaven–leverages a liturgical rhapsody to adumbrate a spiritual victory. The amillenial outcome is a refreshing counterpoint to the premillennialist Left Behind Apocalypse fantasies that littered bookshelves in the actual year 2007!

I am puzzled by the insistence of 21st-century Catholics that Benson’s “prophetic” novel is obviously relevant to our current world situation, which is characterized by nationalist fragmentation and rightward political drift far more than the democracy and liberal humanitarianism that Benson found so frightful. And of course he completely misses anything like the surveillance capitalism and ecocide that are the real engines of our existing dystopia. Nevertheless, the novel is interesting as a peculiar development of the species of fin de siècle Catholic paranoia cultivated and exploited by Gabriel Jogand (the notorious “Leo Taxil”), and the fact that it still has the attention of readers after the date to which it assigned the eschaton testifies in its favor. The individual characterizations are effective; Felsenburgh is not a viewpoint character, and the interior treatment of both Christians and Communists is managed with a fair amount of sympathy. I found it a surprisingly fast read.