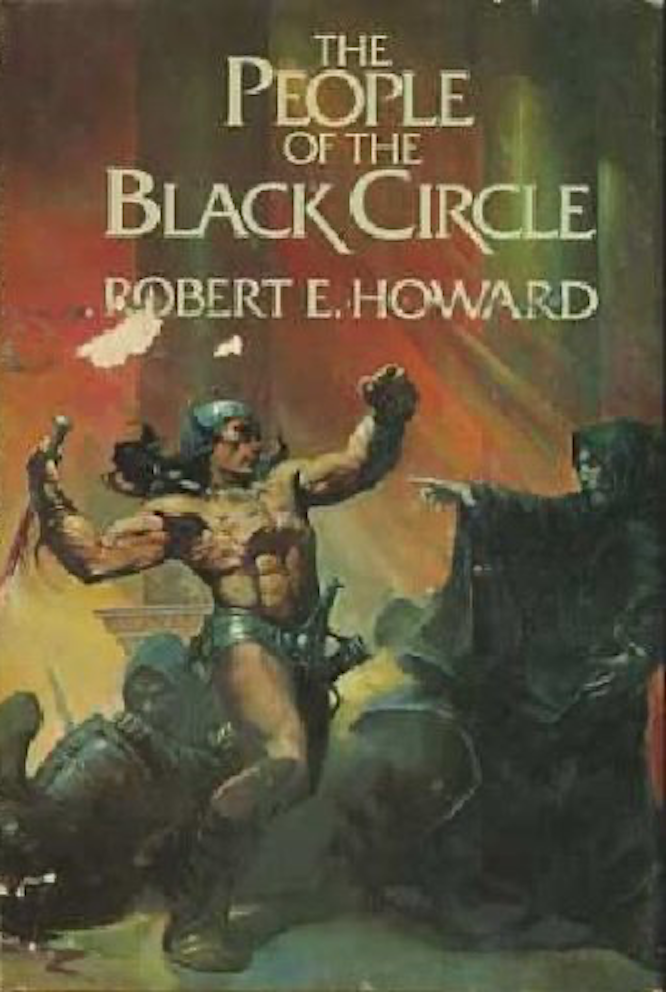 This particular The People of the Black Circle — several different Conan books bear the name — is a collection of four of Robert E. Howard’s Conan stories from his heyday as a Weird Tales author (1934-35). It is part of the late-70s “Authorized” edition under the supervision of Karl Wagner, who conformed the texts to their pulp-era first issuance (with minimal typographical corrections), and sequenced them in publication order. The book jumped to the front of my reading queue as an antidote to the rather weak 2011 Conan movie, and so some of my remarks here will be inflected with mildly irrelevant cinematic concerns.

“The Devil in Iron” is the first of the stories here, and of its six sections, Conan is only present for the final three. (He is mentioned in the second, but does not actually appear in its action.) The character motivation is not too deep: Conan’s enemies correctly surmise that he can be baited with a beautiful girl. The complication and climax are provided by the age-old evil that the reader encounters before any mention of the critical human players. The weird element is in respectable relief here, in the form of the spectrally-rebuilt city on the deserted island of Xapur, as well as the reanimated villain.

It would be simplicity itself to get a good screenplay out of “The People of the Black Circle,” the tale which lends its name to the whole book. It’s got just about the right character distribution and plot complication for a feature film, already being in that middle zone between the short story that needs to be padded out and the novel that needs to be cut down to movie size. It has a nice two-tiered villain system, plenty of sorcery, and a clever resolution of the tension between Conan and the Devi (princess). To be really faithful to Howard’s vision on this one, though, it should be shot in Nepal!

“A Witch Shall Be Born” is one of the most memorable and remembered Conan stories — even for people who haven’t read it, since the crucifixion of Conan in the 1982 Milius movie was derived from this tale. As Wagner notes in his critical afterword, Howard really pulls out the stops here, using a variety of perspectives and literary forms to condense a long narrative into pivotal episodes and embedded synopses. There is a strangely biblical air to the story: not only does Conan get crucified, but the name of the titular witch is Salome, and Howard strongly implies that she is the remote ancestress of her namesake in the court of Herod.

Wagner judges “The Jewels of Gwahlur” to be the least of the four stories in this volume, and I concur. Still, it is a fun and exciting read, with some real mystery and a good deal of tension. And I had to laugh out loud when reading Howard’s explanation: “Conan was basically a direct-actionist.” (177)

Wagner’s apparatus (a foreword and an afterword) is thoughtful and unintrusive. This volume was perfect for the task I had set for it: to tare my scale as a Conan fan after a few too many pastiches and clumsy adaptations.