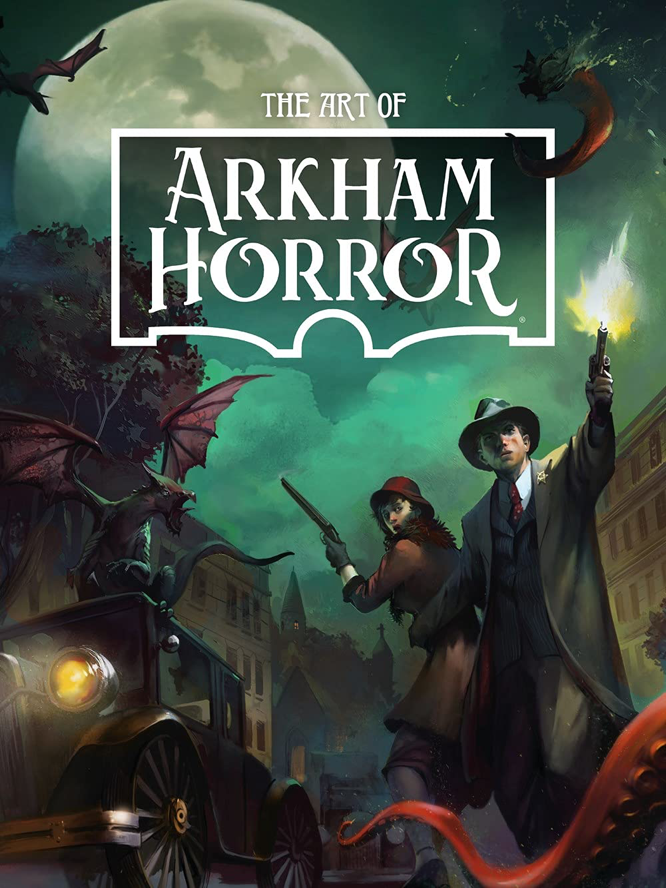 The Art of Arkham Horror is essentially a 2021 successor volume to the 2006 Art of H. P. Lovecraft’s Cthulhu Mythos. Both are lavish showcases for illustrations produced originally for a range of tabletop games set in the world of pulp-era Yog-Sothothery. Where the earlier book drew on work for games from both Chaosium and Fantasy Flight publishers, this more recent one is all from the further fifteen years of Fantasy Flight “Arkham Files” games. The art has previously appeared on box exteriors, rule books, cards, playmats, and other game components.

The books are structured in the same manner, with the art organized into seven or eight topically-defined chapters. Other than the artist credits and occasional subject-matter captions, there is little text, and it is all basically ornamental. In many instances, the text in the new book consists of quotations from the Arkham Horror novellas published by Fantasy Flight from 2017 through 2020. The earlier book had what appeared to be artists’ titles for the individual pieces, and those are lacking in The Art of Arkham Horror. As before, art is often shown at a greater size and less cropped than it had been in its game appearances.

Landscapes and untenanted interiors account for a considerable number of the images here, owing in part to the production of art for the location cards in Arkham Horror: The Card Game. At the same time, with the development of the canonical stable of Arkham Files investigators, there is a large bank of individual character portraits which also feature quite prominently. On the whole, the illustration quality does seem to have improved from the earlier collection to the later one. The new book includes a greater number of illustrations overall: there is far less blank page space and the pages are slightly larger than the already-generous size of the predecessor volume.

Standout artists in this collection include Anders Finer, Magali Villeneuve, Tomasz Jedruszek, Jacob Murray, Ethan Patrick Harris, and Cristi Balanescu. But there are dozens of different artists represented, and the quality of illustration is very high throughout. The supernatural horror subject matter allows for surreal vistas, strange mutations, and other striking expressions of visual imagination. And yet much of this art shows real subtlety as well.