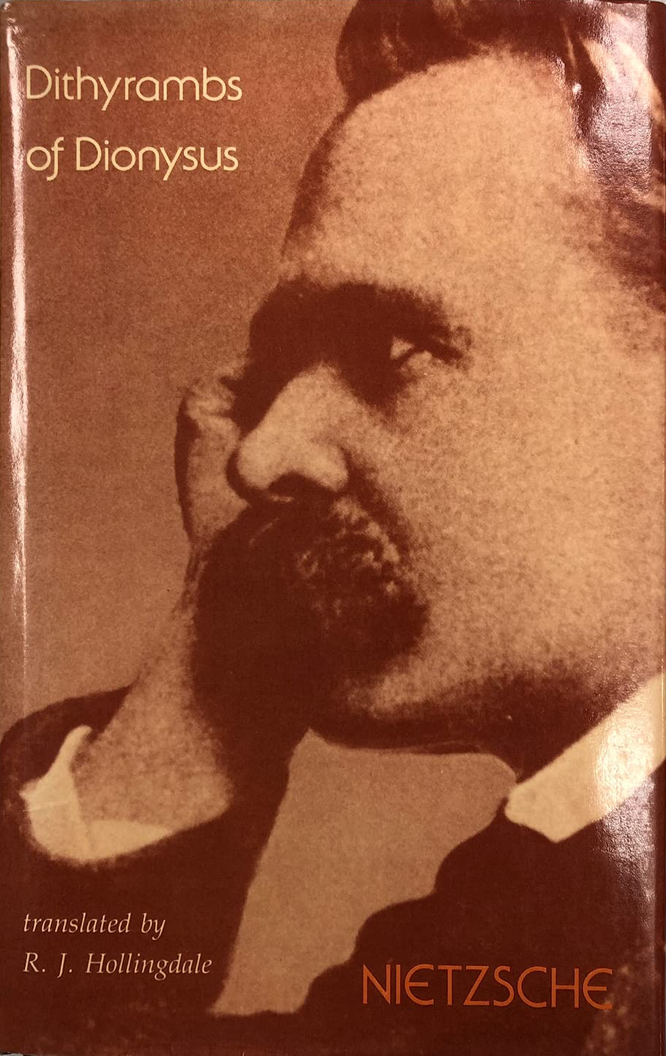 Dionysos-Dithyramben is a set of nine poems revised, written, and collected by Nietzsche during and after the composition of Thus Spake Zarathustra, and they are thus one of the “Werke des Zusammenbruchs” from the close of his writing career. They were dismissed by Aaron Ridley from his edition of all the other “Werke des Zusammenbruchs” (i.e. The Anti-Christ, Ecce Homo, Twilight of the Idols, The Case of Wagner, and Nietzsche contra Wagner) as “a collection of poems whose absence is not to be regretted.” It’s just as well that snotty editor forced me to acquire the Dithyrambs in a separate volume, since the bilingual presentation here — while at odds with the larger project of the Cambridge University Press series of Nietzsche’s works in English translation, in which Ridley’s edition stands — is essential for full appreciation of the poetry.

In the role of translator, R.J. Hollingdale is impressively accurate, but he is more intent on the semantic content of the verse than its poetic form. For example, he sacrifices meter, line emphasis, and some end-rhyme in this penultimate stanza of “Die Wüste wächst: weh dem, der Wüsten birgt . . .”:

It is rendered thus by Hollingdale:

“The desert grows: woe to him who harbours deserts!
Stone grates on stone, the desert swallows down.
And death that chews, whose life is chewing,
gazes upon it, monstrous, glowing brown . . .” (39)

Hollingdale was one of the great 20th-century anglophone champions of Nietzsche, and I take his notes to reflect a conservative, establishment strain in Nietzsche scholarship. The introduction is a helpful, if brief, overview of Nietzsche’s work as a poet and its relationship to his philosophical output.

Hollingdale’s remarks on the individual poems emphasize the autobiographical dimensions of the poems, somewhat to the exclusion (I thought) of their literary value to readers. On the biographical front, he insists (in 1984) that the syphilitic genesis of Nietzsche’s madness is a fully established fact (87-8), although I have read persuasive arguments by Siegfried Mandel (1988) and Geoff Waite (1996) questioning that allegation, and in the case of the latter challenging its supporting narrative assumption of Nietzsche’s heterosexuality.

The nine poems are really gorgeous. Although three of them, with slight alterations, also appear in Thus Spake Zarathustra, I found them more powerful here, and thus I was inclined to agree with Hollingdale that “they were inserted [in Thus Spake Zarathustra] capriciously and by force” (85). The significance of “Klage der Ariadne,” for example is almost inverted in the context of the Dithyrambs, and it was so affecting for me, that it may serve as the touchstone of a new ceremony in my private canon of ritual. This slender volume is a treasure.