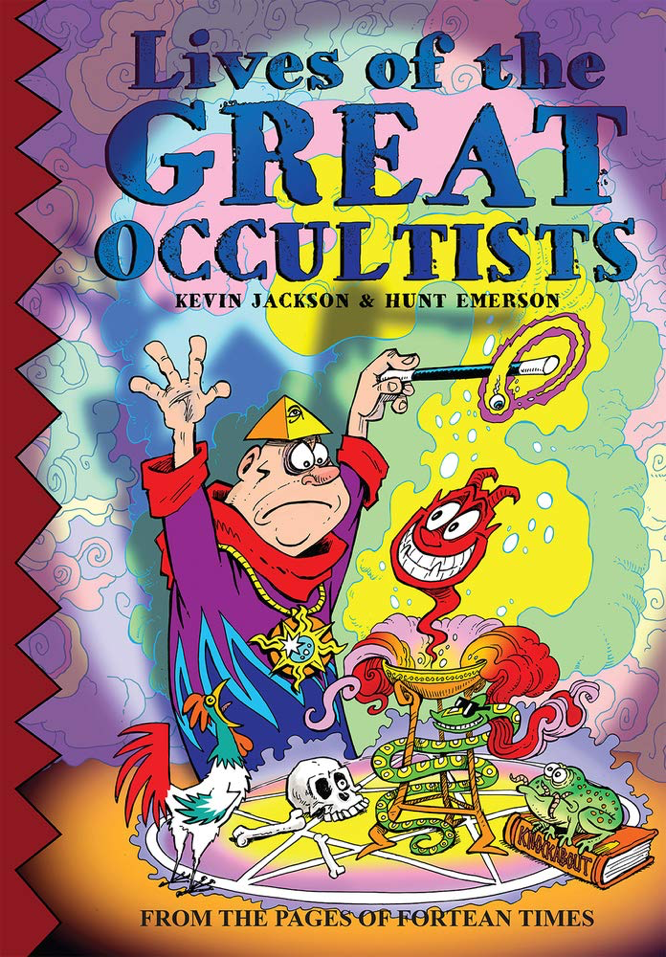 This volume collects in full garish color and ample antic detail many dozens of short sequential art narratives about famous personalities of magic and occultism from the Middle Ages to the present. These were originally produced for Fortean Times magazine. The visual idiom is an “underground comix” sort akin to the work of Gilbert Shelton. The textual tone veers wildly between the poles of adulation and derision, and much of the humor consists of crude visual puns and anachronisms.

The organization of the book is chronological, but a bit sloppy. This sequence is apparently not that of their original magazine publication. The figures selected are well chosen on the whole, and they include a few that were new to me or surprising in this context (Cellini, Thomas Hariot, Torrentius, Evan Morgan, and Orson Welles). The work is not quite comprehensive, though. Some major occultists are notable for their absence: P. B. Randolph, Anna Kingsford, Gurdjieff (appears for a few panels in the P. L. Travers entry), Maria Naglowska, and Franz Bardon, for example.

Most of those treated get only a single entry of one to five pages in length. Robert Fludd and Gerald Gardner each get two, and Aleister Crowley gets eight, along with numerous cameos in entries for other figures.

The Crowley contents make a reasonable case study for merit when trying to estimate the other parts of the book: Crowley’s name is misspelled in a minority of instances as “Alastair” (e.g. 105). Hanni Jaeger is “Hammi Jeager” (95). Claims of fact are hedged with “alleged” and a warning about true, false, and meaningless stories accruing to Crowley (87). Writer Kevin Jackson’s summary verdict that the Beast was “a bit of a rotter” (90) is mostly counterbalanced by giving him so much attention, and Jackson does conclude his introduction to the whole book with the summary of the Law of Thelema (albeit with superfluous initial capitals).

Doubtless for purposes of visual shorthand, Crowley is almost always shown with a shaved head (and 666 on his brow), even during episodes from before he had adopted that style (88, 91). Although most of artist Hunt Emerson’s caricatures of historical persons strike a note of genuine recognizability, his work on Crowley tends to be more semiotic than representational, even in the full-page portrait that concludes the volume.

The four-page Mme. Blavatsky treatment is also rather hostile, and offers the curious error that H. P. Lovecraft “admired” her (51)–in fact, he knew of her Theosophy but found it distasteful. (Likewise, he dismissed Crowley as “a queer duck,” contrary to later misrepresentations concerning the “occult HPL.”) She also gets misspelled once as “Blavatski” (55).

Some notably helpful entries include those for Giordano Bruno, William Blake, Victoria Woodhull, [August] Strindberg, [Carl] Jung, and Charles Williams. There are also a few terrific standalone portraits illustrating the book’s introduction (8-11). Although it can be dismissive and the jokes are often shallow, I found some real merit in this book, and it kept my attention as both a comics reader and a student of esoteric history.