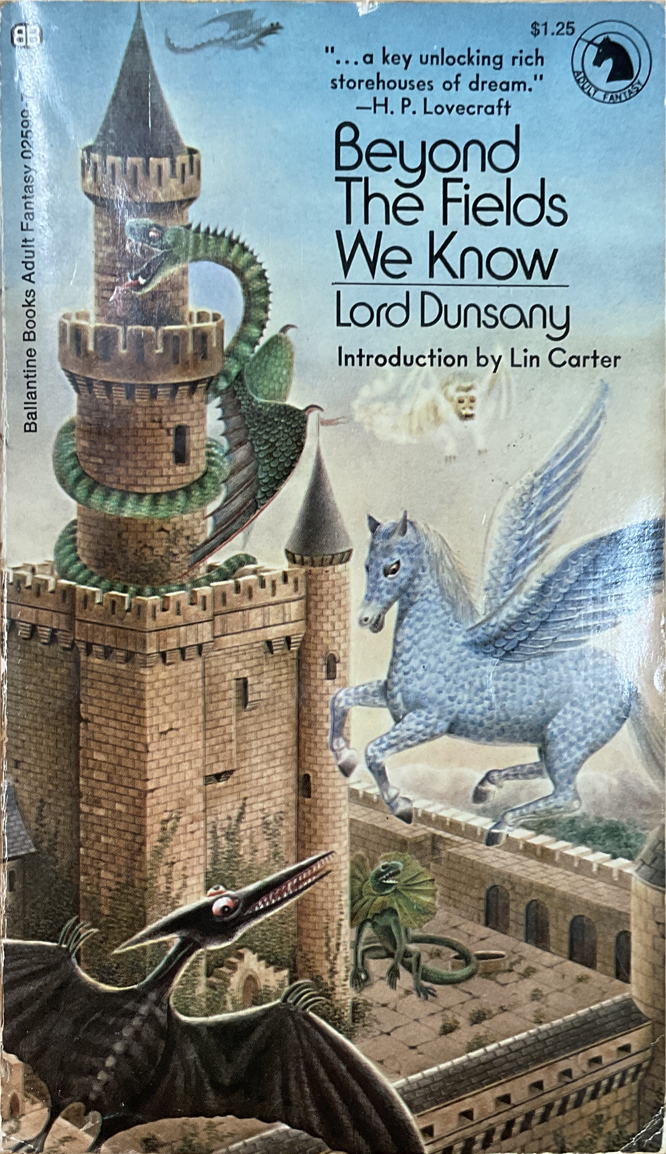 This mass-market paperback is one of Lin Carter’s editions of Lord Dunsany’s fantasies issued by Ballantine in the early 1970s. It contains all of Gods of Pegāna and the better part of Time and the Gods, along with the play King Argimenes and the Unknown Warrior, and a selection of poems and later stories. The Pegāna stories that make up the first part of the book represent one of Dunsany’s chief literary innovations. In Pegāna, he created a cosmology and mythology out of whole cloth to support a narrative universe, setting a precedent emulated by later writers like Tolkien and Lovecraft. Dunsany adopted the narrative styles of myth and high legend, often with surprisingly irreverent effects. In addition to Pegāna’s gods, this collection includes the hilarious later story of “Chu-Bu and Sheemish,” which makes light of divine jealousies.

The thing that really stands out for me in Dunsany’s works is the language. I had to read this purple piece from “The Sword of Welleran” about four times just for the pleasure of it: “Then night came up, huge and holy, out of waste marshes to the eastwards and low lands and the sea; and the angels that watched over all men through the day closed their eyes and slept, and the angels that watched over all men through the night woke and ruffled their deep blue feathers and stood up and watched.” Also, I thought it was interesting in that same story that the nameless narrator and sometimes eyewitness of the story “I, the dreamer that sit before my fire asleep” — was asleep while telling it. Many of Dunsany’s stories are imbued with the flavor of dream and dream-vision to an extent that had perhaps at that time been rivaled in modern literature only by the fantasies of George MacDonald.

Carter’s introduction is chiefly biographical, while his afterword is sort of philological. Expanding on his claim that Dunsany was the first to base invented proper nouns in literary fantasy on Hebrew models — or more precisely the Anglicized Hebrew names of the KJV Bible — Carter traces the direct and indirect influence of Dunsany through those verbal sounds. (The broadest indirect path goes through Lovecraft.) He instances Clark Ashton Smith, Tolkien, Leiber, and many another author as coiners of names on the pattern laid down by Dunsany.

In editing these books, Carter earned the praise of Ursula LeGuin for saving “us all from a lifetime of pawing through the shelves of used bookstores somewhere behind several dusty cartons between ‘Occult’ and ‘Children’s’ in hopes of finding, perhaps, the battered and half-mythical odd volume of Dunsany” (The Language of the Night, 84). These days, much Dunsany is in print again, but Carter’s mass-market editions are still enchanting, and now themselves worth pawing through the shelves of used bookstores to obtain.