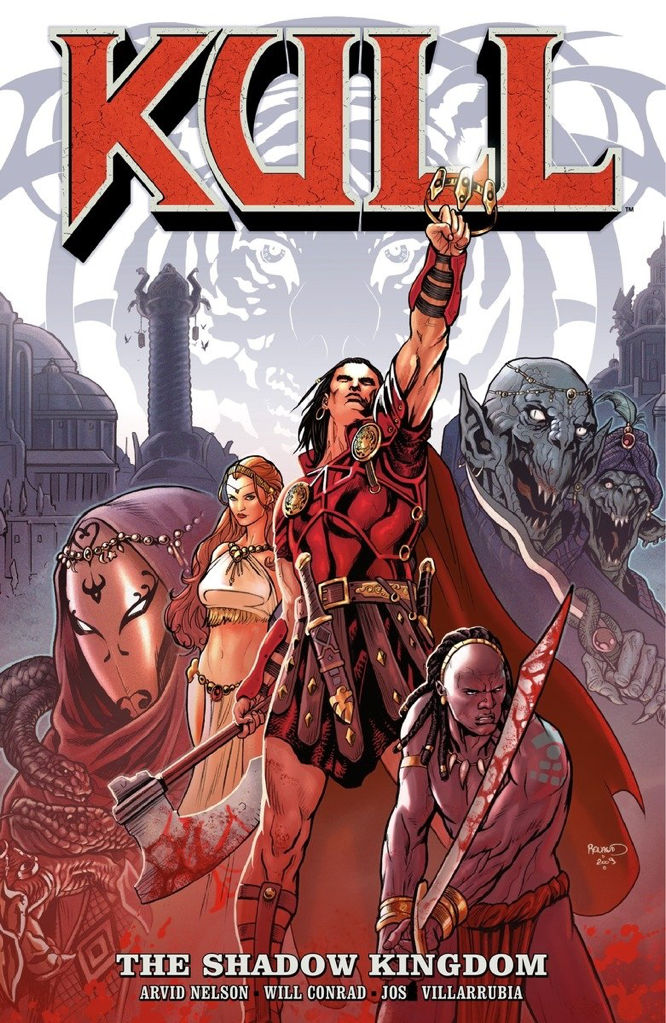 Arvid Nelson returns to the original Robert E. Howard stories to build a 21st-century Kull comic that far outshines its 1970s Marvel predecessor. Certainly, Will Conrad’s art benefits from the improvements in comics production: full-process color and finer printing throughout, with compositions planned for glossy white pages instead of newsprint. But writer Nelson does an altogether better job of adapting the seminal REH piece “The Shadow Kingdom.” A few examples: Nelson adds an artful scene in the Room of Kings in the Tower of Splendor, both to provide background for the later appearance of King Eallal’s ghost, and to serve as a setting to articulate the “Kull … the fool!” mutterings which are here ambiguously attributable to Kull’s animated conscience (as in the REH original) or to lurking serpent priests. Also, where the Marvel writers chose to interpret the REH statement that Kull “had never known … the love of women” by simply avoiding any attention to Kull’s sexual consciousness, Nelson chooses the more sophisticated approach of representing the king in a frosty political marriage. Finally, this newer version returns to Kull’s companion Brule a critical pronouncement during the climactic confrontation with a mass of monsters disguised as the king’s councilors.

The distinctive facial scar that characterized the Marvel Kull is abandoned here, but several panels show Kull’s massively scarred back — no doubt a legacy of his widely-rumored time as a galley slave. The Pict warrior Brule really looks fierce in these comics, while he often looked somewhat silly in the old Marvel numbers. Likewise, Conrad captures the joviality of the Pictish ambassador Ka-nu much better than the Severins ever did. The Serpent Men are altogether more inhuman and menacing, and Valusia itself seems more monumental and ancient than it did in the rather medieval Marvel vision. There is plenty of gore, in keeping with the spirit of the REH original, and an appropriately dark tone pervades the stories.

The new version of “The Shadow Kingdom” forms the central bulk of this volume, complemented by a warm-up “The Iron Fortress” and the epilogue “The Eye of Terror.” My only complaint about the adaptation was that the very last panel of “The Shadow Kingdom” proper (less than an eighth of the page at the lower right) was a mildly humorous undercutting of the heavy finish of this somber tale. Even so, it did “work” narratively in the larger plot frame that Nelson had constructed in order to expand on Howard’s original.

REH scholar Mark Finn provides a foreword here, as he does for the Dark Horse reprint of the early Marvel Kull stories. But where he focuses on the comics in the Marvel case, this essay is really trained on Howard and the genesis of the Kull character. Likewise, a concluding essay by Nelson reflects on the character and his relationship to the better-known and more “successful” Conan, explaining distinctions between them and his preference for the former.