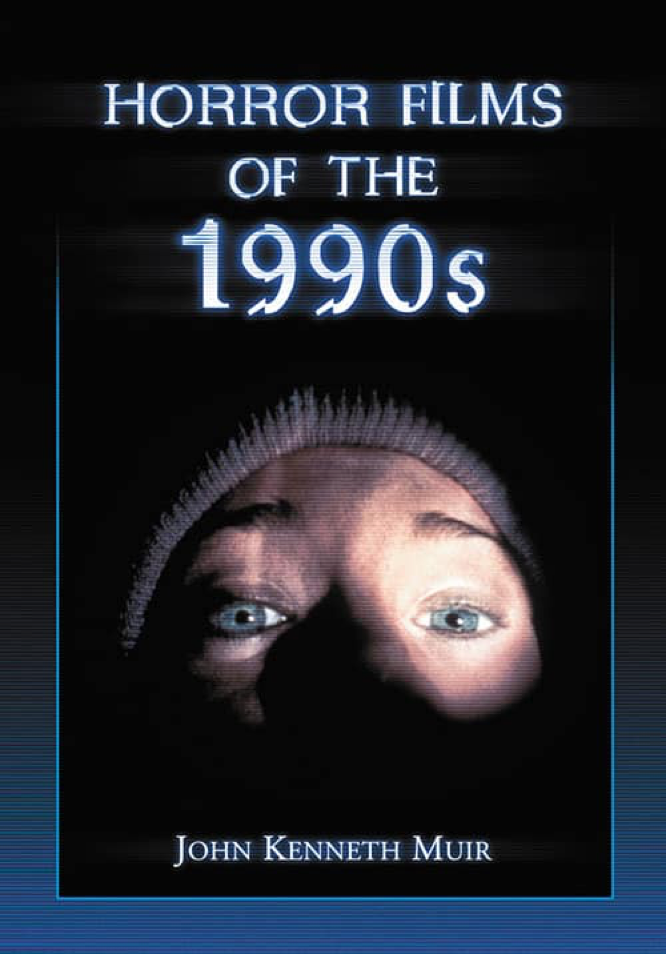 I read this beefy volume after Clark and Senn’s similarly ambitious Sixties Shockers. While the 1960s were a transitional decade for horror movies, the 1990s were allegedly an ebb tide, in which horror was little-produced and hardly marketed as such. Muir does indeed cast a wide net, including such films as Jurassic Park (1993). “Interloper” and “police procedural” themes are among the elements that characterize the typical horror movies of the decade.

The central reviews section of the book is organized by year, and each year’s chapter begins with a timeline inventorying events of major cultural significance for that year. The critical emphasis is on the relationship of cinematic themes to then-current events. So much is this the case, that the reviews tend to omit comparisons to earlier films, except for the most overt sequels and remakes. For example, the review of Body Parts (1991) does not mention the seminal Hands of Orlac (1924, 1960) Nor does discussion of The Masque of the Red Death (DTV 1991) bring up Roger Corman’s magisterial 1964 version of the Poe tale. The stand-out exception is “Appendix D: Movie References in Scream,” which catalogs dozens of film allusions that occur in that 1996 post-modern meta-movie.

The reviews are fully equipped with star ratings and opinionated verdicts, which seemed awfully “accurate” to me, when I was in a position to compare my own views. I was especially pleased with the glowing review of The Ninth Gate (1999) — often the object of critical derision — Muir even placed it at number five in his “Ten Best” list for the decade.

That list is one of a number of clever and useful apparatus elements placed as appendices. “1990s Horror Conventions” provides an index of movies by common tropes, such as “Car Won’t Start,” “H.P. Lovecraft,” and “Vampires.” (The absence of my favorite “Girl on Altar” is sadly due to its general neglect in the movies themselves.) “The 1990s Horror Hall of Fame” is an inventory of notable performers. Having noted that theater horror features were at a disadvantage in the 1990s because of small-screen competition from The X-Files, Muir backs up his claim by tabulating about thirty matches of central plot elements between 1990s horror films and individual X-Files episodes as “Appendix E.”

On the whole, this book accomplishes its goals capably and with a fair amount of style.