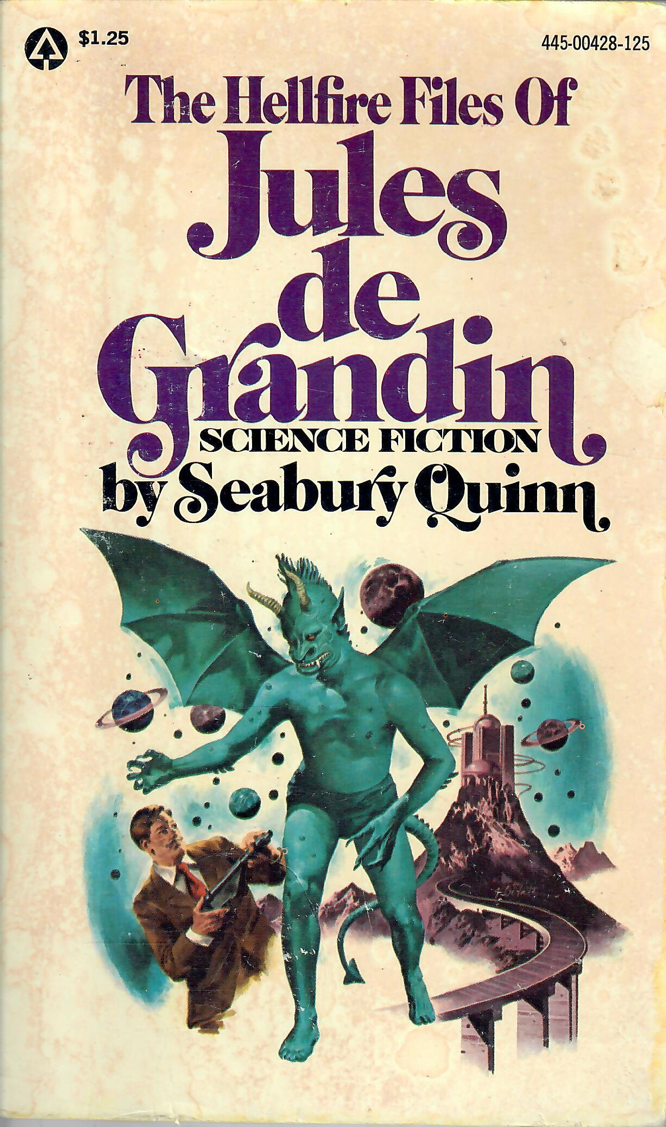 This 1976 mass market paperback collects a half dozen of the ninety-three tales about occult detective Jules de Grandin. This set were all written for publication in Weird Tales from 1926 to 1933. Although all of these books by Seabury Quinn under the Popular Library imprint boast “SCIENCE FICTION” on the cover, they don’t conform to the genre as it is currently understood. They are pulp-era action stories in mundane settings. The “Hellfire” title here is reasonably apposite, since each story has something to do with diabolism or a nefarious cult.

One yarn is called “The Great God Pan,” and although it compares unfavorably to identically-titled stories by Arthur Machen (1894) and M. John Harrison (1988), it is still a palatable romp regarding a neo-pagan cult in the wilds of New Jersey. This one is actually the earliest included here, although it appears second.

Quinn, in the voice of de Grandin, supplies a little occult theorizing around the notion of “psychoplasm.” (A likely proximate source for the term and concept was the 1920 Adventures of a Modern Occultist by Oliver Bland.) The supernatural element in the stories is highly variable, and the final pair of tales furnishes an admirable contrast between “The Hand of Glory” where exorcism is the effective solution to thwart genuine demonic influence and “Mephistopheles and Company Ltd.” where sleuthing and physical combat overcome a criminal gang who use superstition and trickery to terrify their victims. Both stories, like nearly all of these, derive motivation from a young woman in peril. Quinn seems to have preferred such ladies to be tall, slender, and pale.

The selections here include both a vampire story and a werewolf story. The latter, “The Wolf of Saint Bonnot” was the basis for the Hugh Rankin cover art of its December 1930 issue of Weird Tales (scene on pages 125-6 of this book). “The Hand of Glory” inspired the July 1933 cover by Margaret Brundage (pages 174-5). Both covers were racy illustrations typical of their genre and era, and pretty accurate to Quinn’s text.

The book includes an appendix by editor Robert Weinberg that furnishes full biographical sketches of de Grandin and his amanuensis Dr. Trowbridge, as abstracted from Quinn’s stories. For readers new to the de Grandin material, it might be helpful to read this end matter before the stories. Steve Fabian’s map of Quinn’s fictional Harrisonville, New Jersey appears at the start of the book, but the printing is a little muddy and hard to read in my copy.