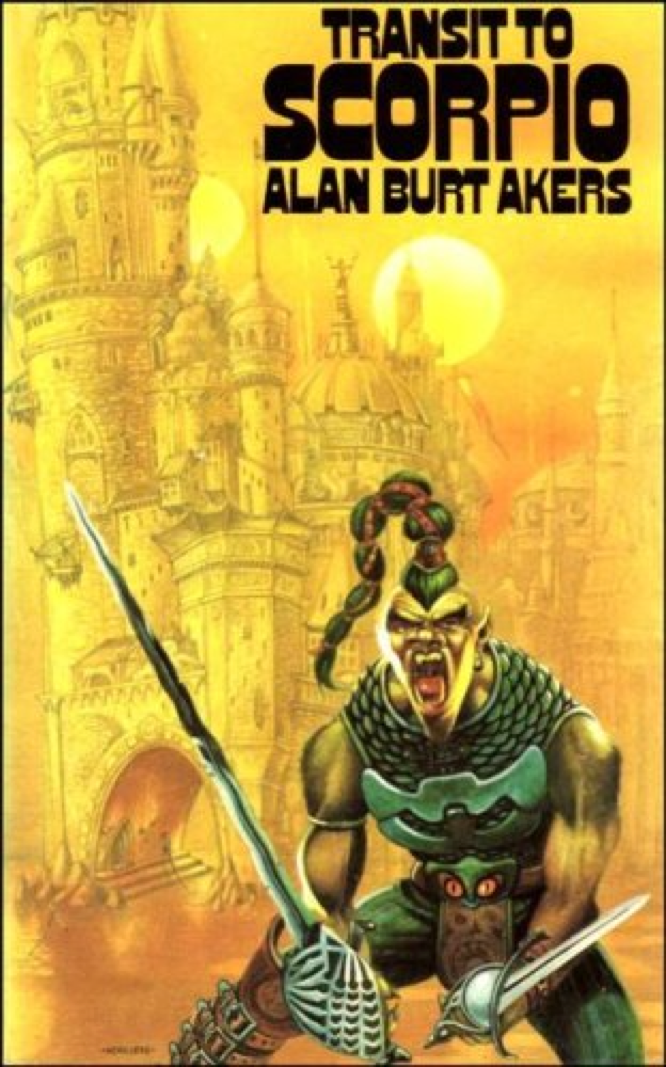 Transit to Scorpio is the first of dozens of sword-and-planet novels by Alan Burt Akers (nom de plume of Kenneth Bulmer) set on the planet Kregen in the binary star-system of Antares (Alpha Scorpii). The scorpion figures as a symbol and a portent throughout the story, beginning with the death of the hero’s father from a scorpion sting.

The book is certainly better than some Burroughs pastiche I’ve read, although it keeps rather rigorously to the formula. Akers makes his alien princess a cripple at the her first meeting with the protagonist, which is an interesting choice. As in other sword-and-planet milieus, manipulations by superhuman agents are responsible for the narrator’s travels between Earth and Kregen. In this case, they are called the “Star Lords,” and their attributes and motives are left entirely unspecified.

There’s an overt allusion to John Norman’s Gor books, in the form of a continent called Gah that is reported to host gender relations of the Gorean type. But that’s just peripheral detail, in this volume anyhow. The issue of slavery is addressed squarely, though. Unlike Norman’s late 20th-century academic Tarl Cabot who has never encountered slavery on Earth, Bulmer’s hero Dray Prescot is from 18th-century Earth, and learned to buckle his swashes in a nautical career. He is familiar with the mercantile slave industry, and antagonistic to it. (Note the repeating meter of “John Carter” in the names of the heroes. No other is permitted!) His initial aversion to lethal violence fades quickly in the course of the story.

On the whole, the book was a quick and pleasant read. The prose is palatable, with a little bit of affectation that seems to suit the narrating character’s 18th-century origins, and the occasional seeming-anachronism stemming from the fact that he has returned to Earth periodically, well into the 20th century. The scorpion omen and some avian signs seem to be related to the Star Lords, but that whole dimension is left opaque, and it is clear that Bulmer intended this to be the first of many linked novels. I’ll probably read more from this series.